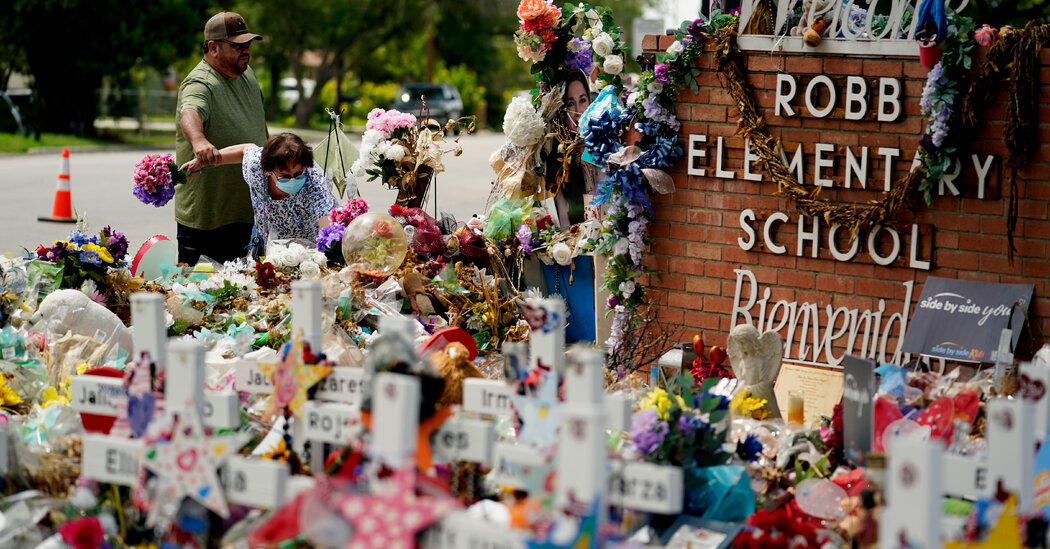 A New Bid to Crack the Code on Gun Violence

One way to stop mass shootings

In 2018, after the Parkland shooting, I wrote a series of articles about how credit card companies and banks played a critical role in financing mass shootings — and how they could help prevent these murders, but have thus far decided to look the other way. A majority of shooters use credit and debit cards to acquire their guns, ammunition and body armor — and the companies behind those card networks have a unique vantage point to spot suspicious buying patterns before law enforcement, families or just about anyone else.

Since I wrote that series, the financial industry has come up with new ways to make it even easier for mass shooters to get military-style weapons, including “buy now, pay later” financing. The teen who carried an AR-15 into Robb Elementary in Uvalde, Texas, which remains shuttered and will be demolished, bought his gun using a bank debit card. Students in Uvalde return to classrooms today.

Back in 2018, I proposed that banks and credit card companies create a new “merchant category code” for gun-related transactions at stores that sell firearms, which would allow them to flag suspicious activity. After all, banks are legally obligated to scrub transactions to help identify domestic terrorism. Oddly enough, while the financial industry uses distinct codes for dozens of different types of merchants, there are none for gun stores.

Now, a financial firm — Amalgamated Bank — has been working behind the scenes to make the idea a reality. The bank, with the help of the advocacy group Guns Down America, recently reapplied to I.S.O., the standards agency, to create a new set of merchant category codes for gun sales.

A decision may be imminent. Just last week, Senator Elizabeth Warren of Massachusetts and Representative Madeleine Dean of Pennsylvania, along with more than a dozen other Washington policymakers, sent a letter to Visa, Mastercard and American Express calling on them to support the creation of a new code. Mayor Eric Adams of New York City, Attorney General Letitia James of New York State and Attorney General Rob Bonta of California also publicly pushed the credit card companies to support it. California’s Teachers’ Retirement System also sent a letter.

Amalgamated Bank applied for the code earlier this year and was denied, according to Igor Volsky, executive director of Guns Down America. Mr. Volsky said he believed pressure from Visa and Mastercard influenced I.S.O.’s decision.

During my reporting on this issue, Visa and Mastercard have been particularly — and surprisingly — resistant to becoming part of a solution to reduce mass shootings. They have repeatedly suggested that they don’t believe they have a role to play in flagging or preventing the sale of particular products, and have punted the issue to lawmakers.

A spokesman for Mastercard told me earlier this summer that the company “did not have a say in the decision” on creating a new code.

“Our position remains the same,” he added. “The issue of gun violence needs to be addressed and it is the responsibility of elected officials to enact meaningful policies to address this issue.” He said the company had sought to enforce gun laws where they apply. Visa has stayed silent on the topic, as have the big banks that issue credit cards.

If I.S.O. creates the code, it could be the beginning of a common-sense approach, one that doesn’t infringe on Second Amendment rights and would hopefully help save lives. But such a move is also likely to become a political lightning rod for businesses. It would test the resolve of business leaders and their commitment to American lives.

Ernst & Young reportedly plans to green-light a major split. The firm’s leaders are set to move forward with a proposal that would divide EY into its auditing and consulting operations, according to The Wall Street Journal. The move, which would require approval by the firm’s 13,000 partners, could reshape the auditing industry.

CVS makes an $8 billion bet on home medical care. The pharmacy giant agreed to buy Signify Health, which runs a network of doctors who make house calls, in a major step away from its drugstore roots. The health care sector has seen a wave of big deals, including by Amazon and Walgreens.

Turmoil at Downing Street. Britain’s prime minister Boris Johnson said he would step down less than three years after a landslide election victory, following a series of scandals that have ensnared his government. Here’s what led to this:

The Pincher case. Mr. Johnson’s downfall is connected with the resignation of Chris Pincher, a Conservative deputy chief whip, after he admitted to having groped two men. Outrage grew as it was revealed that Mr. Johnson was aware of prior sexual misconduct allegations against him when he appointed him; the prime minister had previously denied knowing about the accusations.

The ‘Partygate’ scandal. Since late last year, Mr. Johnson had been grappling with reports about parties he attended in Downing Street while Covid lockdown rules were in force. An internal inquiry found that 83 people violated the rules at parties, and the police imposed hundreds of fines, including one on Mr. Johnson, for breaches of social distancing. Mr. Johnson survived a no-confidence vote triggered by the scandal, but was left reeling politically.

Elon Musk and Twitter square off in court, again. A Delaware judge will hear a variety of legal motions today in the billionaire’s effort to walk away from his $44 billion deal to buy the company. Chief among them is Musk’s bid to amend his countersuit against Twitter to incorporate claims by the whistle-blower Peiter Zatko.

The SPAC taking Donald Trump’s media company public reportedly suffers a setback. Digital World Acquisition Corporation has failed to win shareholder support for a proposal giving it more time to complete its merger with Trump Media & Technology Group, according to Reuters. The SPAC is set to return investor money if it doesn’t reach alternative arrangements.

A $50 billion bounty for chips

This morning the Commerce Department released a long-awaited plan detailing where roughly $50 billion earmarked by the CHIPS and Science Act will go. The 11-figure pot of money, which was approved by Congress in July, is meant to bolster chip production in the U.S., as well as lower America’s reliance on China and other foreign countries for semiconductors. Trade experts say it’s America’s most significant investment in industrial policy in at least half a century.

It’s also potentially a source of government waste and corruption. With midterms approaching, the Biden administration, which will largely determine how the money gets distributed, is under pressure to prove to voters it can use the funds wisely, reports The Times’s Ana Swanson.

CHIPS funds will be spent on R.&D., securing the supply chain and training new workers, according to the Commerce Department. Under the plan, the Biden administration will create two new government offices to implement the program. But the government isn’t rushing to spend the funds — the application process likely won’t open before February, and the money won’t be distributed until spring.

Nearly $30 billion will be devoted to “large scale” investments in “leading-edge” chip manufacturing, the plan says. The government also plans to use $6 billion for loans or loan guarantees. Those loans, according to the strategic plan, will effectively increase the government’s investment in the semiconductor industry by 50 percent, to $75 billion. The plan also puts taxpayers on the hook for larger losses if the loans aren’t repaid.

Stock buybacks, which Democrats have been trying to curb, will get a new disincentive under CHIPS. The guidelines released today say the administration will give “preference” to companies that don’t repurchase their own shares. Another restriction: Successful applicants cannot make new investments in high-tech chip manufacturing in China or other “countries of concern.” The Commerce Department plans to review and audit companies that receive the funding, and claw back funds from those that violates its rules.

A tragedy that will weigh on Bed Bath & Beyond

Gustavo Arnal, the C.F.O. of the home goods retailer Bed Bath & Beyond, died on Friday in what the New York City Medical Examiner’s Office ruled was a suicide. Arnal, 52, was found near his residence in Lower Manhattan, the skyscraper known as the Jenga building.

Arnal did not leave a note, according to The New York Post, making it hard to determine what led to his death. But challenges have been piling up for Bed Bath & Beyond and its executives: The retailer announced last week that it was closing 140 stores and laying off many workers as it scrambled to secure $500 million in emergency financing. Arnal and the company were named in a shareholder lawsuit filed two weeks ago, which the retailer said is without merit.

His death leaves a huge gap in leadership. After Bed Bath & Beyond lost its C.E.O., chief operating officer and chief stores officer in recent months, Arnal was one of the company’s last remaining seasoned executives. Whoever takes the reins will need to manage the retailer’s depleted liquidity and deliver on a promised turnaround. Bed Bath & Beyond has not yet named a successor for Arnal.

Bed Bath & Beyond has ridden a tumultuous wave recently: meme-stock mania, activist investors and the pandemic, for starters. Those forces have already affected the lives of employees who have been laid off and retail traders who have lost money betting on the company’s prospects. The tragedy of Arnal’s death serves as a reminder that there’s more on the line than a stock price rising and falling.

“When we think about what happened in 2020, do we really want another excuse for the American people to question the integrity of our elections?”

— Jill Sommers, a former member of the Commodity Futures Trading Commission, warning that allowing Americans to bet on political races would be bad for democracy. In a petition to the C.F.T.C., Kalshi, a prediction market operator, says it wants to do just that.

She will take charge of a nation on the brink of recession, as it stares down double-digit inflation, a spiraling energy crisis and more. She has promised a “bold plan” to tackle Britain’s ailments — starting by freezing household and business energy bills — but there’s plenty more for her to worry about. Some data points: