Home / Blog / Business / An Orlando Museum’s Disputed Basquiats Are Gone. Its Leadership Is, Too. 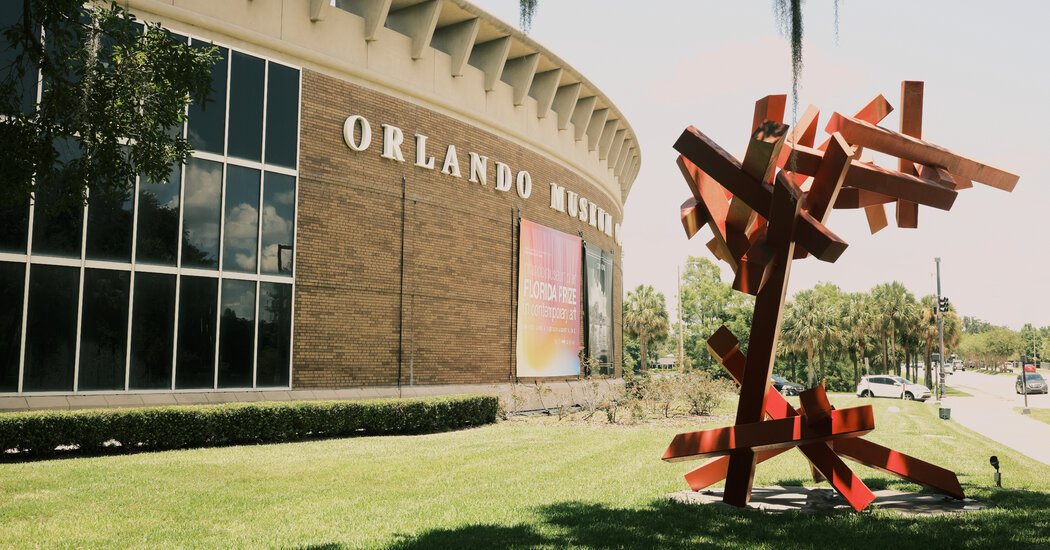 An Orlando Museum’s Disputed Basquiats Are Gone. Its Leadership Is, Too.

Since the Federal Bureau of Investigation raided the Orlando Museum of Art in June and seized 25 paintings that the museum had attributed to Jean-Michel Basquiat but whose authenticity has been questioned, a cascading wave of departures has roiled the leadership of the embattled museum.

Aaron De Groft, who brought the disputed Basquiat show to the museum, was fired in June from his position as the museum’s director. Last week, several members of the museum’s board of trustees who had been discussing plans to seek the resignation of the chairwoman of the board, Cynthia Brumback — over concerns that she had kept the board in the dark about the mounting problems with the Basquiat show — were instead ousted from the board themselves. The museum cited a previously overlooked rule in its bylaws limiting trustees to nine-year terms, which the removed trustees had all exceeded.

Hours after announcing their departure, the museum had another announcement: Without offering any explanation, it said that it had “accepted the resignation” of its new interim director, Luder Whitlock. It was barely six weeks after he had succeeded De Groft, and just a few days after Brumback had praised his “steady command” in an op-ed in The Orlando Sentinel. Since then there has been more upheaval: Brumback has stepped down as the chair at the troubled museum, but she remains on its board.

“I call it the Basquiat fiasco,” Winifred Sharp, a retired judge and one of the trustees who was removed from the board last week, said in an interview. “I could cry I’m so unhappy about it. My family helped start that museum, we’ve worked to support them since the 1920s and it’s always meant a lot to me. I’m sorry to leave it in the mess it is in at the moment, but I’ve done my best.”

That mess, as Sharp sees it, resulted from how Brumback reacted in July 2021 when the museum received a subpoena from the F.B.I. It demanded “any and all” communications between the museum’s board, its employees and the owners of 25 artworks “purported to be by artist Jean-Michel Basquiat” around which the museum built a major exhibition.

The subpoena arrived seven months before the Basquiat show opened to the public, but Brumback and De Groft, the museum’s director, chose to keep it under wraps and proceed as if nothing had happened, according to interviews with several former trustees, employees and internal board emails obtained by The New York Times.

Almost none of the museum’s other 29 trustees were notified, even as outside lawyers were hired and began taking statements from employees at the museum, the former trustees and employees said. The investigation was “the worst kept secret in town — even the security guards here were asking about the F.B.I.,” recalled a museum employee who was granted anonymity because the museum’s staff was threatened with termination if they spoke to the news media.

The exception was a trustee who oversaw the museum’s finances, and who had asked about the large legal fees the museum was suddenly incurring, the former trustees said, and emails confirmed; he was said to have been sworn to secrecy. The rest of the board only learned of the subpoena’s existence when it was mentioned in an article in The New York Times in May 2022 — three months after the Basquiat show had opened.

“Had we known when we should’ve known, the show would not have happened,” Sharp said. “I am a former judge and a lawyer, and I know the implications of being served with a subpoena: They think there’s probable cause that there’s fraud. Everyone would normally go ‘Whoa! Whoa! Whoa!’”

A subsequent June meeting of the board’s executive committee, called to discuss the subpoena, only heightened the frustrations some members felt about Brumback’s secrecy. “The board of directors is the only entity — not the chair of the board, but the entire board — that holds the corporate franchise,” Ted Brown, a well-known local attorney and former board president who was among the recently ousted trustees, said in an interview. “We are the responsible party for the good, the bad, the ugly, and everything in between at the museum. For Cynthia to keep that information from us was a breach of her responsibilities.”

Brumback did not respond to repeated requests for comment. In the op-ed that The Orlando Sentinel published before she stepped down as chairwoman, she wrote that De Groft had offered assurances that “highly qualified art experts had vetted the authenticity” of the paintings in their Basquiat exhibition, which was called “Heroes and Monsters.”

“The OMA Board and staff continue to feel the embarrassment from the F.B.I.’s seizure of the works in the Heroes and Monsters exhibition and subsequent negative attention,” she wrote. “We are continuing to process and grapple with the notion that something we were so happy about has become the source of ill will within the museum family and our beloved community.”

Several former board members spoke of what they described as Brumback’s shifting explanations for not telling the rest of the board about the subpoena; at one meeting, Brown said, Brumback maintained that the museum’s legal counsel had urged her to keep it secret. He said that that prompted one of the museum’s outside lawyers to note: “I want to make it clear, we did not give the advice to not tell the other trustees.”

That meeting ended with the decision to close the Basquiat show a year early, on June 30. But on June 24 the F.B.I. raided the museum and seized the paintings off its walls.

In an affidavit filed to secure the search warrant, an F.B.I. agent provided evidence that the collection’s origin story, as it had been described by its owners and the museum, was false, and noted that there was reason to doubt the authenticity of the art works, pointing to one that was painted on a piece of FedEx cardboard with custom typeface that was not used until after Basquiat’s death. (In a recent interview De Groft maintained that he still has “absolutely no doubt” that the paintings are authentic.)

Since then, as the museum made international headlines and began to grapple with fallout from donors, some trustees began to argue that Brumback, who had been working with a crisis communications firm, needed to be more transparent to rebuild trust. Trustees aligned with Brown and Sharp favored apologizing to both the community and the museum’s staff — several of whom had raised concerns about the authenticity of the Basquiat paintings before the show opened, only to face threats of dismissal if they pressed the issue.

The situation came to a head last week after Brumback’s op-ed. Several trustees were upset that Brumback did not seem to take any responsibility, and worried that her piece implied that the whole board had been made aware of the subpoena. Some were also unhappy that she had not shared the op-ed with the board before publication. Brumback later emailed a critic on the board that she thought the piece would “help rebuild OMA.”

Some trustees felt that it did the opposite. By Aug. 22, five of them — including Brown and Sharp — had decided to call for a special board meeting to be held Friday, concerned about the drain on the museum’s budget from lawyers and publicists, as well as the danger that prominent donors would flee.

Brown said that the meeting’s agenda was clear: “I was going to say to the chair, ‘Look, you need to proffer your resignation and explain that you made the decision on your own to keep us from having information. And you were wrong to do that.’” He said that if she had taken responsibility, the board might have given her another term.

Instead, his own tenure on the board was cut short. On Tuesday afternoon Brown, along with Sharp and three other trustees, received a terse email: The board’s bylaws had been consulted and all five had exceeded the board’s term limit. They were thanked for their volunteer service as trustees — 30 years’ worth in the case of Carolyn Fennell, an executive at the Greater Orlando Aviation Authority — and were told that they were being immediately removed from the board. The Friday meeting was canceled.

Sharp said that she and several other term-limited trustees had previously been asked to stay on and help guide the museum through its ongoing crisis. “We kept asking the chair to make a full, fair and honest statement of what really happened here,” Sharp said. “We have been begging her to do it! It took a lot for me to say we have no resort but to call this meeting.” With a sigh, she added, “It’s obvious that the people who didn’t want to have this meeting didn’t want to face up to the issues we had been trying to raise.”

In the end, there was a meeting on Friday, without the ousted board members. Brumback stepped down as chair but remained on the board. She was succeeded by Mark Elliott, whom several trustees saw as a close ally of hers. A news release noted that Brumback would “collaborate” with Elliott, the new chair. He said in the release that “we have our work cut out for us” and added that his tasks included “focusing on good governance and the museum’s practices and procedures.”

One of his first tasks will be finding a new museum director. Last Wednesday, after the ouster of the trustees, Whitlock, the museum’s interim director, who had seemed to be sympathetic to some of their concerns in internal emails, resigned.

“I love the museum, I want to see it do well,” Whitlock, who had temporarily led the museum during a previous upheaval, said in an interview. “But it’s obvious that by resigning, I was not pleased with certain things.”

His voice cracking, he concluded, “And that’s all I can tell you.”