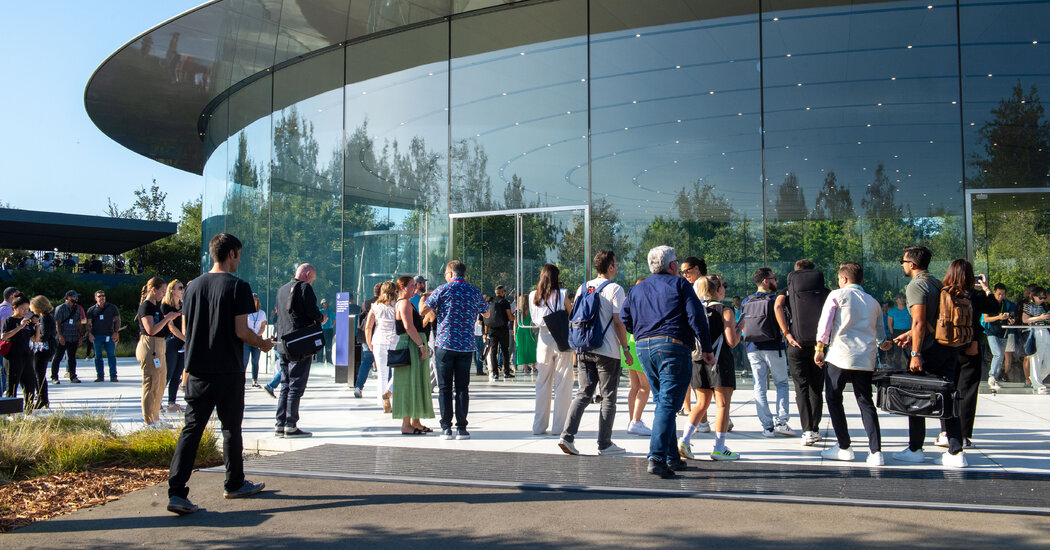 At its annual marketing event on Wednesday, Apple unveiled its iPhone 14 with satellite phone capabilities that can be used in emergency situations. But sharing the spotlight is a product that has slowly developed a strong following: the Apple Watch.

The wearable computer, originally released in 2015, still accounts for a tiny sliver of the company’s revenue. But it has helped Apple build a fortress around the iPhone, deepening customer loyalty to the company’s most important device.

On Wednesday, Apple expanded on this strategy with an array of new watches. It unveiled a new fitness-focused smartwatch aimed at triathletes, distance runners and backcountry enthusiasts.

The Apple Watch Ultra, a rugged $800 model with a larger screen and improved durability, thrusts the company into a corner of the smartwatch market dominated by Garmin, which does about $2.6 billion in sales to endurance sports competitors.

The new watch features an “action” button to make it easier to use while wearing gloves, bigger speakers for calls in windy conditions and a bigger battery that offers 36 hours on a single charge. Jeff Williams, Apple’s chief operations officer, said the watch was “designed to push boundaries.”

In addition, Apple released an update for its traditional watch, the Series 8, which costs $400. It includes a sensor to track body temperature changes, which can help predict menstruation cycles and ovulation for women trying to get pregnant. It also has a feature called “crash detection,” which can identify when an Apple Watch wearer is in car accidents and notify family and emergency services.

Apple also lowered the price of its entry-level watch, the Apple Watch SE, which debuted in 2020 for $280. The new version, priced at $250 and lacking some features found on the more expensive models, was designed to make the device more accessible, especially to families. A growing number of parents are buying the Apple Watch for their children as a precursor to a smartphone to stay in touch and track their locations, according to research data from the investment group Piper Sandler.

Apple has a strong lead in smart watch sales, with nearly 51 percent of the market, ahead of Samsung and Huawei, which account for 19 percent and 5 percent. The Apple Watch Ultra and the lower-priced Apple Watch SE should help Apple increase sales of a business that generated an estimated $17 billion in revenue last year, said Francisco Jeronimo, vice president of device research at IDC, a market research firm.

The company coupled its smartwatch release with an update to its line of wireless earbuds, known as AirPods. It introduced a new generation of its AirPods Pro line, priced at $250, with new features, including the ability to turn the volume up and down with the swipe of a finger. It also offers improved noise cancellation to better reduce high-decibel noises like construction, the company said.

For Apple, the smartwatches and AirPods are dwarfed in importance by the iPhone, which accounts for more than half the company’s total sales. But the devices, which require an iPhone to work optimally, have helped Apple deepen customer loyalty. They also provide a lower-cost alternative to an iPhone, which could help the company maintain sales momentum in a slowing economy.

“The more products you have from Apple, the more impossible it becomes to leave Apple for another player,” Mr. Jeronimo said. “Your entire life becomes part of a single ecosystem.”

Apple unveiled the products at the Steve Jobs Theater on its campus in Cupertino, Calif., the first time it has held a product event there since 2019. The venue was packed with journalists and employees, who celebrated the return to normalcy by cheering loudly as Tim Cook, Apple’s chief executive, took the stage to introduce a prerecorded infomercial detailing its newest products.

Among them was the iPhone 14, an introductory-priced phone that costs $800. The phone features last year’s processor, which reduces the costs of components for Apple. It also has improved front and rear cameras with larger sensors to capture clearer photos in low light.

It adds the capabilities of a satellite phone, giving people the ability to connect with emergency services in rural and remote environments so that they can get help if they are lost while hiking or find themselves in some other dire situation.

Apple saved its biggest design changes for the iPhone 14 Pro, which costs $999, the same as last year’s flagship phone. The new phone features a smaller notch for its Face ID system, an “always-on” display to illuminate information like a clock without unlocking the phone, and a slimmer, black border around the screen.

Unlike the lower-priced iPhone 14, the Pro model features a new processor, the A16, that supports an improved camera with a larger sensor for improved photos. It also supports new machine learning algorithms to enhance the details and sharpness of photographs.

Despite having some of the highest price tags in the smartphone market, the iPhone enjoyed a business revival during the pandemic. For its last fiscal year, Apple posted a record $192 billion in revenue from the iPhone alone, a 14-year-old device that has become better known for incremental improvements than revolutionary innovations.

The iPhone 14 may be more notable for where it’s being made than its new features. This year, for the first time, the company will assemble some of its flagship iPhone 14 phones in India for its launch, part of a strategy to decrease its dependency on China where it produces the vast majority of its products.

Efforts to diversify its supply chain have assumed greater urgency this year amid pandemic-induced disruptions in China and escalating geopolitical tensions over Taiwan’s status.

“We’re in a post-maturity phase of the iPhone,” said Bob O’Donnell, founder of Technalysis Research. “It’s getting harder and harder to tell generations of the device apart.”