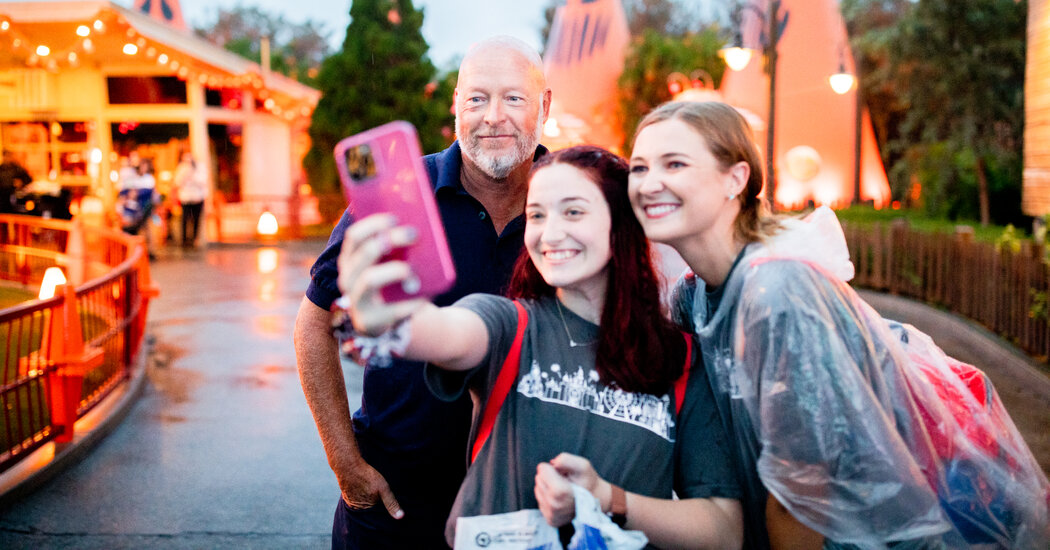 Every few years, the Walt Disney Company stages a colossal pep rally for its most ardent fans. The three-day event is called D23 Expo, and roughly 140,000 people pay anywhere from $79 to $899 for the chance to see Disney stars, preview upcoming movies and learn about new theme park rides.

The message, as is often the case with Disney, is not subtle: Keep buying our stuff!

At the latest D23 Expo, which took place over the weekend near Disneyland in Southern California, there was, however, another item on the company’s agenda. It was an opportunity for Bob Chapek, Disney’s intermittently embattled chief executive, to try to close a difficult chapter — a political imbroglio in Florida, executive firings, theme park fans in open revolt — and focus attention on Disney’s plans for the future. It was also an opportunity to work on a brand reboot for himself.

Mr. Chapek was sporting a new beard. The frumpy suits? Gone. He was making an obvious attempt to be more social, which he has said does not come naturally. He shook hundreds of hands from Thursday night to Sunday afternoon, heaped praise on stars in behind-the-scenes schmooze sessions and gave interviews to news outlets and fan sites. (Disney said it gave credentials to 1,000 reporters and online writers.) With his son by his side, Mr. Chapek went on a corn dog run into Disneyland, stopping to pose for photos when recognized by startled guests.

“I’m trying to show a little more of who I am,” he said on Friday night in the lobby of Disney’s Grand Californian Hotel & Spa. “I haven’t had a lot of chances.”

This year’s expo, the first since Mr. Chapek took over the company in 2020, kicked off on Friday morning with a two-hour opening ceremony in which Disney started its 100th anniversary celebration and recognized people who had made “extraordinary contributions” to the company. In the moments before the ceremony started, Mr. Chapek chatted backstage with seven stars from Disney’s Broadway musicals. They were in costume and there to kick off the show.

“You’re going to dance with us, right?” Jelani Remy, bedazzled as Simba from “The Lion King,” jokingly asked Mr. Chapek.

“Can you teach me some moves?” Mr. Chapek shot back with a smile. “I’ve got two left feet.” Everyone laughed.

A few minutes later, the Broadway performers were onstage before 7,000 seated D23 Expo attendees. The stars opened with “Friend Like Me” from “Aladdin” and ended with a thundering rendition of “Let It Go” from “Frozen.”

As confetti fell from the rafters, Mr. Chapek strode onto the stage, waving like a party boss at a political convention. The crowd turned noticeably chilly, with attendees offering polite applause and a few boos.

If Mr. Chapek noticed, it was not discernible. He began a speech that incorporated the usual Disney chestnuts. (“It all started with a mouse.”) Then his presentation became unusually personal. He spoke about his humble childhood in an industrial part of Indiana and how his parents took him on annual visits to Walt Disney World.

“Honestly, those visits changed my life,” Mr. Chapek said, as the awkward feeling in the room began to dissipate. “It made me realize that there was a great big world out there beyond the smoke stacks of my hometown. Really, that’s what Disney is all about. It’s that spark that ignites something special inside of you.”

Then he unveiled plans for a new Avengers ride. One of the guys who had booed jumped to his feet and cheered with outstretched arms.

Mr. Chapek, 62, was named C.E.O. in February 2020, taking over from the exceedingly popular Robert A. Iger. The handoff did not go smoothly. The coronavirus pandemic forced Mr. Chapek to close most of the company. This year, Mr. Chapek contended with one crisis after another, some of his own making.

In March, Disney became entangled in a heated dispute with Gov. Ron DeSantis of Florida, a Republican, over legislation meant to prohibit classroom discussion of sexual orientation and gender identity through the third grade. Mr. Chapek tried not to take a side at first, at least publicly, which prompted an employee revolt. Mr. Chapek then denounced the bill, setting off a political firestorm, with right-wing figures railing against “woke Disney.”

In June, Mr. Chapek abruptly fired Disney’s top television executive, to howls of disapproval from Hollywood. In August, the activist investor Dan Loeb pushed Mr. Chapek to consider a range of changes, including shaking up the board and spinning off ESPN. (On Sunday, Mr. Loeb backtracked on a spinoff, saying on Twitter that he had learned more about Disney’s “growth and innovation plans” for ESPN.)

All the while, some of Disney’s most dedicated theme park customers have been growing indignant over price increases they see as nickel and diming. Last month, Disney told investors that theme park profits would have been even higher if not for an “unfavorable attendance mix” at Disneyland, which annual pass holders took as an affront. T-shirts, mugs and stickers began selling online bearing the word “Unfavorables” in Disneyland’s signature calligraphy.

Mr. Chapek’s attempt at a brand overhaul can be attributed, partly, to Kristina Schake, who joined Disney as chief communications officer in April. Ms. Schake, who previously helped recast public images for political figures, including Michelle Obama and Hillary Clinton, was attached to Mr. Chapek’s hip as he traversed the more than one million square feet of the D23 Expo. (She brought eight pairs of shoes.)

Ms. Schake convinced him to keep his beard after noticing that he had grown one on vacation. Detractors in Hollywood have snidely suggested that the outcropping makes Mr. Chapek resemble Thanos, the Marvel supervillain. But GQ magazine has given its blessing, with a headline on Friday saying that Mr. Chapek was “rocking the rare corporate power beard.”

D23 is a reference to 1923, the year Walt Disney arrived in Hollywood. The event is both awe-inspiring and terrifying to witness because it showcases how deeply the company’s products, mythmaking and characters are woven into the cultural fabric. One area is dedicated to Disney’s television operation, which has 300 television shows in production. Disney has a new residential housing business. It owns National Geographic. With resorts in Europe, China, Florida and California, the sun never sets on a Disney theme park.

Over the weekend, one attendee signaled his love for “Beauty and the Beast” by turning up as the candlestick character Lumiere. A woman outfitted as the Queen of Hearts from “Alice in Wonderland” walked the expo aisles while shouting, “off with her head.” Two attendees began to cry on Saturday when Alan Bergman, the chairman of Disney Studios Content, started a three-hour preview of coming Marvel and Lucasfilm projects.

Those $899 ticket packages? They sold out in seven minutes. Some people started lining up at 3 a.m. on Friday for the chance to buy D23 Expo merchandise. In 2019, the last time the expo was held, three retail locations at the convention rang up more than $1 million in sales apiece over three days. (Don’t call this a cult; a Disney publicist may appear out of nowhere, like the “Hercules” villain Hades, to scold you.)

In private conversations, a few Disney executives fumed that Mr. Chapek did not go table to table at a luncheon for Disney Legend award recipients, as the effortlessly charming Mr. Iger usually did. Mr. Chapek was also absent at a private Friday cocktail reception attended by some of Disney’s top creative executives.

But Mr. Chapek’s charm offensive was on display elsewhere. Backstage on Friday, he mingled with stars like Amy Adams, Ariana DeBose, Jude Law and Cynthia Erivo. “We’re so lucky to have you as part of the Disney family,” Mr. Chapek told Jamie Lee Curtis, who will appear in “Haunted Mansion,” a coming Disney film.

Earlier, Mr. Chapek had chatted with Jennifer Lee, the Oscar-winning “Frozen” director and chief creative officer of Walt Disney Animation Studios. Ms. Lee is writing the screenplay for “Wish,” an original animated musical. “What I’ve read already is just fantastic,” he told her. She replied: “I’m working this weekend on the script. You ain’t seen nothin’ yet.”

Heading toward his dressing room, an R.V. parked backstage (with a refrigerator stocked with water, Diet Coke and Dr Pepper), Mr. Chapek encountered a D23 attendee who was persistent in trying to grab the C.E.O.’s attention. He was in his 20s and looked cranky.

A Disney security guard tried to hustle Mr. Chapek away, but Mr. Chapek stopped and turned around.

“I just wanted you to know, to shake your hand, and say thank you — thank you for keeping Disney going,” the man said haltingly.

“I’m glad you’re here,” Mr. Chapek said. “I want you to know that we appreciate you.”

Satisfied, the attendee vanished into the throng.