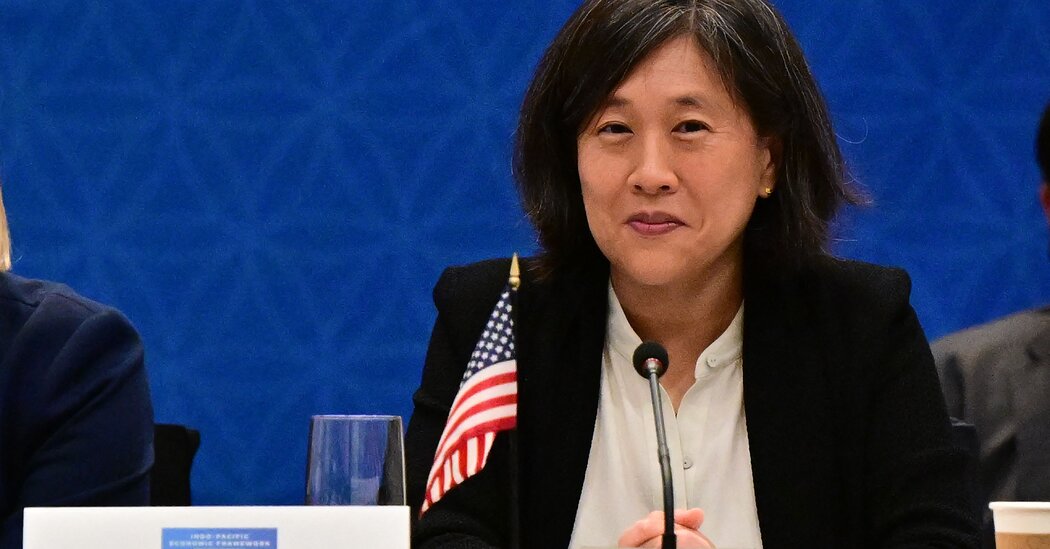 The Biden administration on Friday concluded its first round of in-person negotiations for a proposed trade pact with more than a dozen Asian nations, the initial steps toward an agreement that officials said would reassert American influence in the Pacific and counter China’s dominance of the region.

Officials from 14 countries, including India, Japan, South Korea, Australia, Indonesia, New Zealand, Singapore, Thailand and Vietnam, met in Los Angeles on Thursday and Friday to begin negotiations on the plan, known as the Indo-Pacific Economic Framework.

The countries — which account for roughly 40 percent of the world economy — laid out the major areas of discussion, such as trade, climate change and the direction for future discussion, officials said in a news conference Friday.

Katherine Tai, the U.S. trade representative, said the goal was to establish a modern economic relationship that delivered “broad-based economic connectivity and benefits our workers, combats climate change, builds resilient supply chains and levels the playing field for our companies, big and small.”

One of the so-called pillars of the talks, trade among the countries, is being led by Ms. Tai’s office. The Commerce Department has taken the lead on three other topics that the framework will address: increasing the security of supply chains, promoting clean energy and decarbonization and synchronizing tax and anticorruption policies.

Read More on the Relations Between Asia and the U.S.

Not all countries will participate in all pillars. While all 14 have agreed to negotiate over supply chains, for example, India has decided not to participate in the trade pillar.

Officials declined to speculate when the negotiations might conclude. No date has been set for the next meeting, but Gina Raimondo, the commerce secretary, said that countries had agreed on an “aggressive timeline” and that it might be early next year.

The framework, abbreviated as IPEF, is different from traditional trade deals, which have offered foreign countries more access to the U.S. market by lowering the tariffs charged on goods at the U.S. border. Instead, the pact focuses on setting standards for digital commerce and environmental protection, and cooperating on issues like supply chain disruptions.

The Biden administration has described this as a selling point, saying past trade deals helped multinational businesses at the expense of American workers by encouraging companies to move their factories and offices overseas, where environmental and labor protections were weaker. The administration has also argued that the framework would promote trade among the countries by addressing issues that other past deals haven’t, like supply chain resilience and digital trade.

But some business executives and trade experts have expressed skepticism about whether an agreement that does not lower tariffs can motivate other countries to adhere to the higher labor and environmental standards the Biden administration would like.

Some would instead prefer a multicountry trade deal that strips back tariffs — like the Trans-Pacific Partnership, an Asian trade deal negotiated by the Obama administration. While the Trump administration withdrew the United States from that deal in 2017, the remaining members went on to ratify it, and China has applied to become a member. That and other trade pacts in the region have sparked concerns that the United States is being left out of agreements that are writing the rules of trade in Asia.

The plan also has some critics on the left, who cite the poor labor and human rights records of some of the participating countries, and worry that new trade rules, for example in the digital space, might still enable more American companies to send jobs offshore.

Mary Lovely, a professor of economics at Syracuse University and a senior fellow at the Peterson Institute for International Economics, said that she had been initially skeptical about the lack of market access offered in the framework, but that Asian governments appeared to be motivated to establish new economic ties with the United States as a bulwark against China.

“They do want to see a balance from the U.S. against the very large presence and influence of China,” she said, adding, “They see real problems coming as they look to the future of trade, and they are very happy that the U.S. is talking to them about it.”