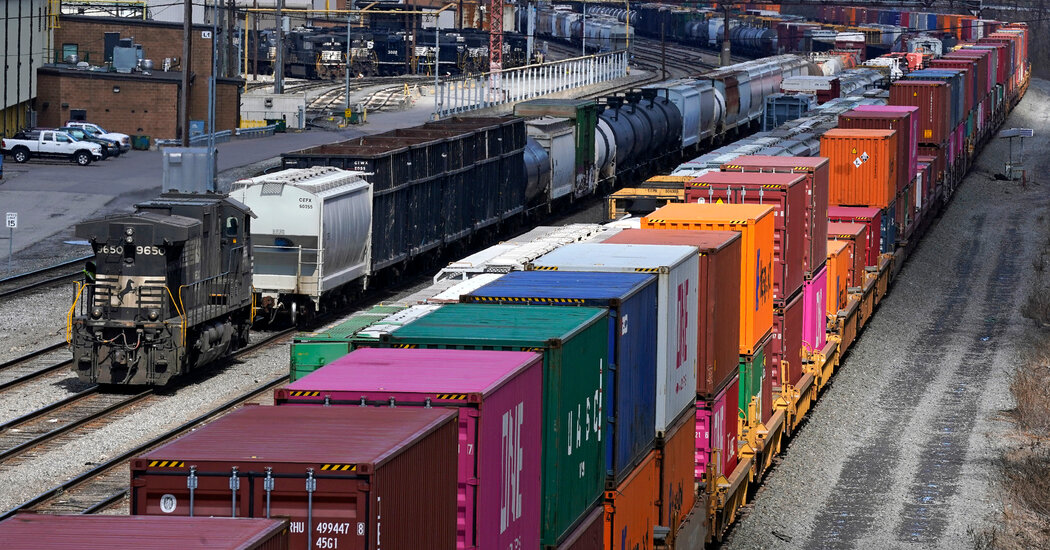 WASHINGTON — President Biden, desperate to avert a damaging freight rail strike that could exacerbate rapid inflation, is pushing rail companies and unions to reach an agreement ahead of a Friday deadline, while exploring whether he can do anything unilaterally to assuage workers’ concerns.

Mr. Biden and his economic team have been inserting themselves into final-hour negotiations between rail unions and large rail companies, which are at loggerheads over scheduling and sick time. Labor groups have insisted that employees be able to take unpaid time off for physician appointments, a request railroad companies have been unwilling to grant.

On Wednesday, in anticipation of a strike, Amtrak said it would cancel all long-distance passenger trains beginning on Thursday in order to avoid possibly stranding people given that many of its trains run on tracks operated and maintained by freight carriers.

Also on Wednesday, members of a small rail union, whose leaders had reached a tentative deal with freight companies, voted down the agreement, signaling more difficulty in negotiations to come. And Mr. Biden’s labor secretary gathered union and company leaders in Washington to try to resolve the impasse, with little progress.

The looming strike has plunged Mr. Biden into a difficult position at a critical moment, with midterm elections that will determine whether Democrats retain control of Congress rapidly approaching and rampant inflation chipping away at the president’s support. Mr. Biden, a longtime champion of labor leaders and union employees, is caught between his long-running push to reduce the pandemic-era supply chain snarls that have helped fuel inflation and his efforts to continue to win the enthusiastic support of labor unions.

As a result, Mr. Biden is attempting to walk a careful line, taking pains to tell both unions and companies that they have an obligation to the public to keep rail service moving. While he has pushed to elevate the power of organized labor throughout his time in office, he is wary of hurting American consumers and the economy, which could experience shortages and price spikes from even a brief strike.

On Monday, Mr. Biden phoned leaders on both sides of the table to urge a deal, stressing the same message to both sides, according to people familiar with the discussions: A strike will hurt rail customers and a broad swath of people and businesses across the country, and a negotiated agreement is the best way to avoid one.

Martin J. Walsh, the labor secretary, and White House officials hosted union and company leaders in Washington on Wednesday in an attempt to broker a deal before Friday, when a federally imposed “cooling off period” for negotiations expires. Workers could go on strike immediately, though they will not automatically do so.

The talks have become bogged down over the unions’ complaints about the working conditions faced by employees who power the nation’s second-largest mode of freight transport — including long shifts scheduled on short notice and penalties for calling in sick or going to the doctor. Mr. Biden’s aides have discussed whether the president could take some form of executive action to guarantee better conditions for rail workers.

White House officials would not elaborate on what actions the president’s economic team had discussed, and it remains unclear what power Mr. Biden has to resolve issues that are largely under the purview of private companies.

Mr. Biden could push Democratic leaders in Congress to pass legislation that either extends the cooling-off period or forces unions and employers to accept contract recommendations issued last month by an emergency board established by Mr. Biden this summer.

But Mr. Biden is not former President Ronald Reagan, who famously ordered striking air traffic controllers back to work in 1981 and fired those who did not comply. He is, instead, fond of calling himself the “most pro-union president in history.”

“This is an issue that can and should be worked out between the rail companies and the unions,” Karine Jean-Pierre, the White House press secretary, told reporters on Wednesday, adding, “not by Congress.”

Administration officials are making contingency plans for trying to minimize disruptions for critical shipments in the event of a strike. Those include working with trucking companies, ocean shippers and other alternative forms of transportation to ensure some supplies can still get to their destinations.

But the administration’s options are limited, said John Drake, the vice president of transportation, infrastructure and supply chain policy at the U.S. Chamber of Commerce, a business lobbying group that has pushed Mr. Biden and Congress to act decisively to avert a strike.

“The tools that the administration has at its disposal to try to alleviate the impacts of this simply aren’t going to be sufficient,” Mr. Drake said, “so that the American public doesn’t see firsthand what damage this is going to do to their lives and livelihoods.”

Michael K. Friedberg, an attorney focused on the transportation industry at Holland & Knight, said union leaders were aware of the political predicament the standoff was creating for Mr. Biden and congressional Democrats. But their members “don’t care about the politics of Biden. They want their sick leave and they want it now” he said.

“It really puts Biden and the Democratic caucus in a bind,” he added.

Nearly a third of U.S. freight moves by rail, second only to trucking. The Association of American Railroads, which represents major American, Mexican and Canadian freight railroads, as well as Amtrak, estimates that a nationwide rail service interruption could idle more than 7,000 trains daily and cost the economy more than $2 billion a day.

Railroads began warning their customers last week that they would prepare for a strike by cutting back some services. Union Pacific, CSX and BNSF all said they would begin securing hazardous and toxic materials on Monday, to try to ensure that dangerous goods would not be left unguarded in the event of a strike. Norfolk Southern closed its gates to shipping containers coming off trucks and ships on Tuesday, and said it planned to begin shutting down its network entirely at midnight on Thursday.

Kristen South, the senior director of corporate communications at Union Pacific, said in an emailed statement that, while those actions were necessary, they did not mean that a work stoppage was certain.

“What we want, and continue to push for, is a prompt resolution that provides historic wage increases to employees and allows the railroads to restore service as soon as possible, preventing further disruption to the struggling supply chain,” she said.

But two of the major unions that have not agreed to a contract called those preparations “no more than corporate extortion,” saying the rail carriers were further harming the supply chain in an effort to provoke congressional action.

“Our unions remain at the bargaining table and have given the rail carriers a proposal that we would be willing to submit to our members for ratification, but it is the rail carriers that refuse to reach an acceptable agreement,” the SMART Transportation Division and the Brotherhood of Locomotive Engineers and Trainmen said in a joint statement.

On Wednesday, the International Association of Machinists and Aerospace Workers, which represents 4,900 locomotive machinists, track equipment mechanics and other maintenance personnel, said it had also voted to reject the agreement with the carriers and authorize a strike, but that it was delaying its action until Sept. 29 to allow for more time for negotiations.

The complicated dispute involves a dozen unions, each with its own process for ratifying agreements reached with the railroads, as well as more than 30 railroads and roughly 115,000 employees.

The disruptions could affect huge swaths of American industries that rely on rail transport to ferry their goods across the continent in a timely manner. For instance, the retail industry is currently rushing to move toys, clothes and electronics from cargo ships to warehouses and distribution centers ahead of the holiday shopping season. Many American farmers are also about to begin harvesting their crops, which they often put on trains to send to processors.

American railways are responsible for transporting much of the chemicals, automobiles, metals, grain and oil that moves around the continent, in addition to shipping containers full of shoes, shampoo and furniture.

Any stoppages would set off a rush among farmers and retailers to secure trucks to move their goods, most likely pushing up spot prices in the trucking industry and adding to cost inflation for industries that rely on trucking, said Priyesh Ranjan, the chief executive of Vorto, a supply chain platform.

A rail strike could also worsen congestion at East Coast ports, as companies try to move their goods closer to consumers by ship, and on the West Coast, said Judah Levine, head of research at Freightos, an international freight platform.

Another complication also looms: Dockworkers and terminal operators at West Coast ports have been locked in their own extended negotiations over a contract that expired in May. While both sides have committed to continue moving goods while they negotiate, the possibility of a work stoppage or slowdown that cripples trade remains.

Because of the rail industry is central to the economy, Congress and the administration have special authority to intervene in its labor disputes. Under the Railway Labor Act, the president can appoint an emergency board to make recommendations to solve labor disputes.

President Biden convened that board in mid-July, and it issued a report on Aug. 16, starting a 30-day period in which strikes, slowdowns and lockouts were forbidden.

The railways have said they are willing to accept the board’s recommendations, which included increasing nominal wages by 22 percent over five years and largely maintaining the status quo for health insurance benefits.

Most of the unions have also agreed to the proposal. But several unions, including two major ones that represent roughly half of the workers covered by the negotiations, are holding out for improvements to their sick leave and attendance policies, which they have described as “draconian.”