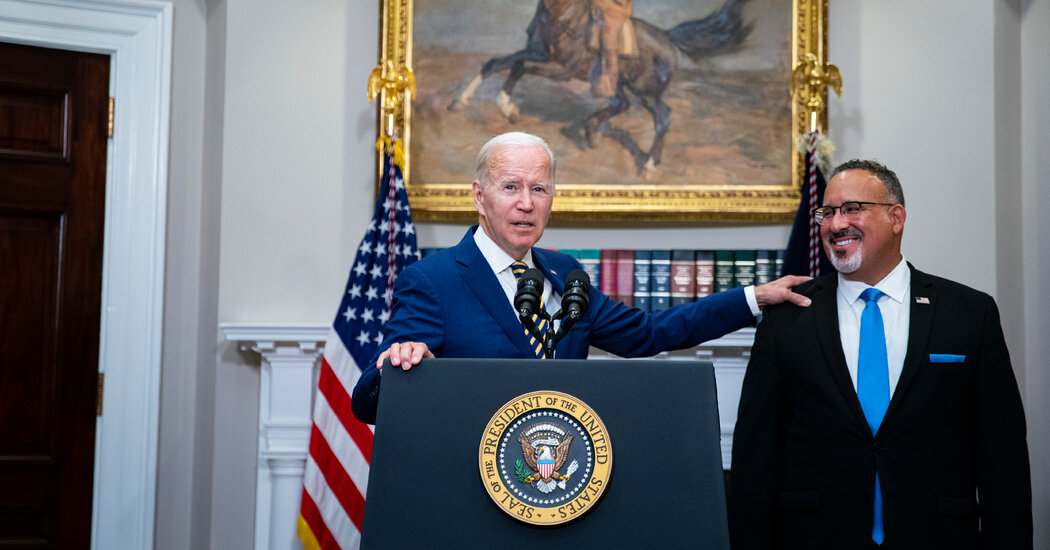 WASHINGTON — President Biden’s plan to forgive some student debt has sharply divided liberal economists and pitted the White House economic team against both independent analysts and veterans of past Democratic administrations.

The areas of disagreement include how much the package of debt relief and other changes to student loans will cost taxpayers and whether the plan is “paid for” in budgetary terms. The plan’s impact on inflation, which is rising at a rapid clip, and the degree to which it will help those most in need are also matters of contention.

The plan, announced last week, includes forgiving up to $10,000 in loans for individuals earning $125,000 or less and an additional $10,000 for borrowers from low-income backgrounds who received Pell Grants in college. Mr. Biden also proposed changes to loan repayment plans going forward that will reduce monthly costs and eliminate interest accumulation for potentially millions of lower-earning borrowers who maintain payments.

White House officials have offered partial estimates of who will benefit most from those moves, and how much they might reduce federal revenue. The officials have made a case for why the package will not add to inflation. And they have claimed it will be “paid for,” though not in any way that budget experts agree fits that term.

Conservative economists have attacked the plan, claiming it would stoke higher inflation and burden taxpayers with hundreds of billions of dollars in new debt. Some liberal economists have defended it as a lifeline for graduates who have been harmed by the soaring costs of higher education.

Many will benefit. President Biden’s executive order means the federal student loan balances of millions of people could fall by as much as $20,000. Here are answers to some common questions about how it will work:

Here is a quick guide to some economic controversies that Mr. Biden’s plan has provoked.

How much will it cost?

Forgiving existing debt, and reducing the degree to which some future debt will be repaid, will bite into a revenue stream for the federal government and increase budget deficits. But it’s very difficult to say how large that increase will be, for several reasons.

For starters, it’s unclear what share of eligible borrowers will go through the process to request debt cancellation from the Education Department, which has not yet set up the forgiveness program. It is also not clear how many people who apply to have their debt canceled would have paid back their full balance if Mr. Biden had not taken any action. Each of those variables could significantly affect the total cost in lost revenue.

Outside groups have tried to estimate the total cost. The Committee for a Responsible Federal Budget calculates the budget impact at somewhere between $440 billion and $600 billion over a decade. The University of Pennsylvania’s Penn Wharton Budget Model estimates just over $600 billion over 10 years.

The White House will not complete an official estimate of the plan’s costs until winter at the earliest, according to the White House budget office. But officials say those outside estimates are far too high. The budget office estimates that one part of the program, the debt relief of up to $20,000 per borrower, will reduce loan payments to the government by $24 billion a year over the next decade, assuming three-quarters of borrowers opt into the program.

Administration officials also claim the plan is “paid for” — because the federal deficit is set to shrink by at least $1.7 trillion this year compared with last year. In interviews, officials say the nation’s improving fiscal picture has given Mr. Biden confidence that debt forgiveness is affordable.

“It is paid for and far more by the amount of deficit reduction that we’re already on track for this year,” Bharat Ramamurti, a deputy director of the National Economic Council, told reporters on Friday.

That’s not how “paid for” usually works. The budget deficit is coming down in part because of increased tax revenue, but also because the government borrowed trillions more than usual last year to pay for a $1.9 trillion stimulus package aimed at helping people, businesses and government endure the pandemic. The officials are effectively arguing that they are paying for student loan relief in part by not borrowing more money for pandemic aid.

Will inflation go up?

This is an argument about economic baselines with real implications for American shoppers, who are experiencing the fastest price increases in 40 years. Some economists, like Harvard’s Jason Furman and Lawrence H. Summers, both former top economic officials in Democratic presidential administrations, have warned that forgiving student debt will add to inflation. Their rationale: By reducing or eliminating future loan payments, consumers will have more money to spend. While borrowers won’t be getting checks from the government, they will be relieved of the financial burden of monthly payments.

“Pouring roughly half trillion dollars of gasoline on the inflationary fire that is already burning is reckless,” Mr. Furman wrote on Twitter last week.

White House economists, like Jared Bernstein of the Council of Economic Advisers, have countered that the sum of Mr. Biden’s moves will not add to inflation. That is because Mr. Biden also announced last week that after a nearly three-year “pause” in federal student loan payments for the pandemic, they will restart in January. Researchers at Goldman Sachs agree that the plan won’t worsen inflation, saying the reduced buying power from restarting interest payments will more than offset the boost from loan forgiveness.

Inflation critics say that calculation uses dubious economic math since the pause in payments was never meant to be permanent. If your base-case assumption was that people would start paying their loans again soon, adding forgiveness on top of it is inflationary, to some degree.

The actual inflation rate doesn’t account for baselines. It depends in large part on how much money consumers have to spend (and how few goods and services there are for consumers to buy). The inflation rate is unlikely to surge again next year as a result of Mr. Biden’s plans, according to Goldman Sachs and other forecasters. But it could be at least slightly higher than it would have been if he had simply ended the payment pause and not announced any debt relief.

In that sense, to use Mr. Furman’s metaphor, Mr. Biden’s actions could be less like pouring gasoline — which causes flames to flare up — and more like adding another log when the fire is beginning to burn down, keeping the heat steady.

The early Penn Wharton modeling of Mr. Biden’s plan, with more generous benefits to borrowers from low-income backgrounds and income limits on who gets debt relief, has found that nearly three-quarters of the benefits of the plan will go to low-income and middle-class earners, with almost none to those at the very top.

Some critics say the plan is still a giveaway to the rich — or, more precisely, people who stand to be rich sometime soon, like young doctors and lawyers who are just starting out in their fields. These critics have pushed the White House to produce an analysis that effectively predicts the effects of the policy on different borrowers when considering their expected lifetime earnings, in the belief that it will show a much larger skew to the top. Officials say that’s not possible without a lot more analytical work.

Penn Wharton did attempt a rough approximation of that sort of analysis, by calculating the plan’s effects only on borrowers ages 25 to 35. But it found essentially no change in the results: Among people of that age group, the bulk of the benefits still went to households earning between $29,000 and $88,000 a year.