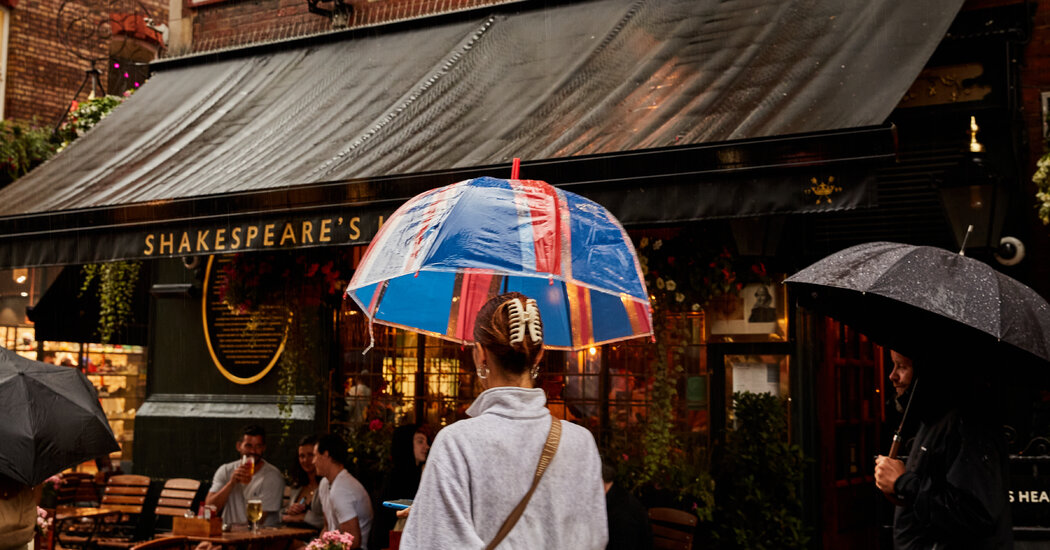 Britain’s Pubs Are Threatened by ‘Alarming’ Rise in Energy Bills

LONDON — With every day that passes, Lindsey Armstrong’s dilemma gets worse as Britain’s energy crisis closes in on her pub.

“The price goes up daily,” said Ms. Armstrong, who owns a Champs Sports Bar and Grill in Washington, a small town in northeast England. She has admittedly given herself little time but says she never anticipated prices rising so much. And the shortest contract she has been offered is for three years.

She’s reluctant to sign a fixed-term contract at current prices.

“The longer I wait, the harder it gets to make a decision, but I can’t actually sign myself into a contract of that length,” she said, “because I know I can’t afford that.”

Ms. Armstrong is taking the risk of waiting with the hope that by the time a new contract must be signed, a new government will have intervened.

Across Britain, there is rising panic about the cost of energy. Households face an 80 percent increase in the price cap on their energy bills starting next month. There has been some government help with residential gas and electric bills, and there is expected to be more, though what form it will take is unknown as the country waits for a new prime minister to be formally appointed on Tuesday.

Businesses have fewer protections. Industry groups are warning that there could be a tsunami of closings over the winter if small but energy-intensive companies, especially pubs and restaurants, don’t get help with skyrocketing bills.

BrewDog, a prominent brewery and pub chain, said it was closing six locations around the country — just two weeks after opening its largest-ever bar in London — because of “spiraling” energy bills and other rising costs.

“Reality in the hospitality space is starting to bite and bite hard,” James Watt, a BrewDog co-founder, wrote in a LinkedIn post on Thursday announcing the closures. The chain will still have about 70 locations in Britain.

Last week, chief executives of six large pub chains and breweries and the head of the British Beer and Pub Association called on the government to provide “swift and substantial” intervention. Without it, “there is no doubt we will witness a huge number of pubs close their doors for good, leaving individuals without jobs during a cost-of-living crisis,” they wrote.

While alarms are ringing for pubs, the energy crisis is sweeping through the economy. The Federation of Small Businesses has warned of the impact on everything from fish-and-chip shops and launderettes. The group estimated that electricity bills for small businesses had risen nearly 350 percent since February 2021, and gas bills more than 400 percent.

Some businesses have already closed, including a small radio station, cafes and shops. Others, including a food bank and hospices, have expressed grave concern about how they will afford rising bills.

There is no way for many of these businesses to fully absorb the costs or increase their prices to cover them. The Bank of England predicts that the British economy will enter a long recession this year as household incomes experience their worst squeeze in generations. Inflation is rising at the fastest pace in 40 years, climbing 10.1 percent in July from a year earlier, and wage growth isn’t keeping up. The situation has prompted dozens of strikes across the country.

Sean Hughes is waiting to see what kind of aid the new government might provide before the energy contracts for his gastropub, Dylans at The Kings Arms in St. Albans, just north of London, have to be renewed in November. The current quotes are “alarming,” he said, with gas increasing to more than £52,000 a year, from about £6,000, and electricity up about £49,000. For the hospitality industry, which is already battling rising costs of food and labor, this crisis could be worse than the coronavirus pandemic, he said.

The rise in energy bills is even making companies that aren’t imminently renewing their contracts nervous.

In one of the wealthiest enclaves in northwest England, Gill Leigh-Ford is concerned. She owns the Ye Olde Admiral Rodney in the village of Prestbury, in a part of Cheshire dotted with multimillion-pound homes. It’s the kind of place called home by Premier League footballers. Back in May, Ms. Leigh-Ford had to renew her electricity and gas bill without using an energy broker — a service that helps businesses find the best prices — after her previous broker insisted on a £7,000 deposit for a new contract.

She now has a two-year contract, but she’s worried that her energy supplier will find a way to tear it up. “I don’t trust the energy companies,” Ms. Leigh-Ford said. “I feel that they would be able to lift prices whenever suited them.”

More than 200 miles away, Mark Holden is a co-owner of Inn Cornwall, a pub company that he poured his savings into to start in 2010. It operates three pubs in Cornwall and employs about 100 people. Mr. Holden isn’t due to renew his electricity bill until March, but that offers little reassurance: Late last year, his gas supplier went bust, and he had to find a new supplier, at a much higher price.

“Nothing is guaranteed,” he said.

Mr. Holden has already tried to cut costs by fitting solar panels on one of the pubs, but even then the company is a large consumer of energy because it operates long hours, serving from breakfast to dinner, in large, old buildings.

If energy bills are still extremely high by the time March rolls around and there has been no government intervention, “then probably we will start working on exit strategies coming out of the industry,” he said, because he couldn’t increase prices enough to cover the costs.

In Washington, Champs is a franchised business modeled on American sports bars, with burgers and wings on the menu and TVs adorning the walls. Ms. Armstrong said that she could set her own prices, but that covering the extra energy costs would require “astronomical” increases, doubling the prices of most menu items. Each week, the pub would need to make £6,000 more than it’s currently taking in.

Among businesses seeking relief, the most popular idea is a cap on their energy bills, as residential customers have. Another proposal is to reduce the value-added tax, a type of sales tax, which is reportedly being considered by Liz Truss, the foreign secretary. Ms. Truss is also expected to be the next prime minister, as she was well ahead of her opponent, former Chancellor Rishi Sunak, in polling of Conservative Party members.

Ms. Armstrong said she didn’t expect to be able to pass those V.A.T. savings along to customers because the money would be needed to pay the bar’s energy bills.

At the moment, Ms. Armstrong is considering reducing her open hours, limiting food service times, closing off parts of the pub and cutting back staff hours. But she’s reluctant to reduce working hours because her employees, too, face rapidly rising prices at home, and some of them are new parents.

But even all of these changes wouldn’t cover her expected increase in energy bills, Ms. Armstrong said.

Since the pandemic lockdowns, “we’ve opened up, we’ve had a really good year, and then to have this, it’s just soul destroying,” she said. “It’s absolutely soul destroying.”