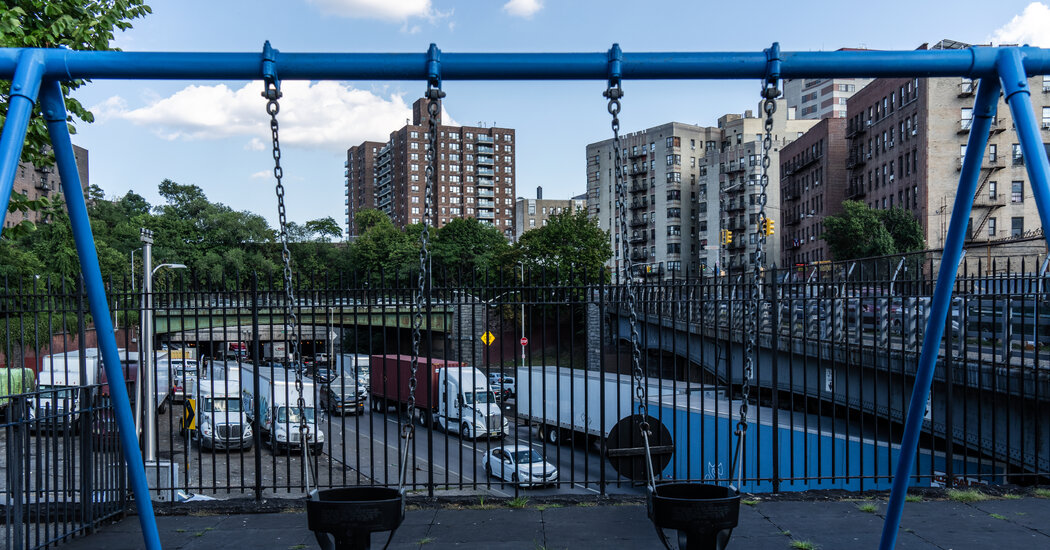 The plan to put tolls on drivers on Manhattan’s busiest streets is intended to spare New York City’s central business district from pollution and gridlock while raising money for public transit.

But while some of the city’s wealthiest neighborhoods would enjoy the greatest benefits, one of its poorest and most polluted — the South Bronx — could end up with dirtier air from diverted traffic.

The proposal, known as congestion pricing, would use the tolls to discourage motorists from squeezing into Midtown and Lower Manhattan, where dense traffic often clogs the roads and contributes to poor air quality in the city’s iconic financial, tourism and theater districts.

The plan seeks to decrease the number of vehicles on the road and boost public transit at a time when cities globally are seeking to curb harmful emissions from cars, buildings and power plants to combat climate change.

But according to an environmental assessment released by the Metropolitan Transportation Authority, motorists detouring around the new tolls could add traffic and soot to parts of the Bronx, Staten Island, Nassau County on Long Island and Bergen County in New Jersey.

Among the highways that could see more cars, trucks and exhaust is the Cross Bronx Expressway, a key artery for commercial traffic that runs through some of America’s poorest neighborhoods. Roughly 220,000 Bronx residents live along the roadway’s edges — mostly people of color — with hundreds of thousands more nearby, already breathing some of the city’s most polluted air.

So far, the loudest concerns over congestion pricing have centered on possible toll costs, some as high as $23. Taxi drivers, Lyft and Uber drivers, and vehicle owners across New York and its suburbs have united in protest. Less public outcry has focused on how the proposal could reshape the crushing flow of traffic the city deals with every day.

“Why should the Bronx have less breathable air than the rest of the city?” said Ritchie Torres, a Democratic congressman representing an area that is among the nation’s most impoverished districts, containing portions of the western Bronx, the South Bronx and the expressway.

The M.T.A. is exploring several options for how much to charge car and truck drivers; generally, the higher the tolls, the more vehicles are expected to avoid them. Among those scenarios, the one with the greatest impact on the Cross Bronx would send it 704 more trucks per day (it currently logs over 27,000). It would increase the soot from truck traffic by about 5 percent, and overall soot — which also comes from factories, building boilers and other sources — by 1 percent, according to a New York Times analysis of M.T.A. data.

The M.T.A. board has yet to approve congestion pricing, though it is expected to pass the program in some form, and Gov. Kathy Hochul, who controls the board, is in favor of it. Representatives of the M.T.A. said that no decision on pricing and other key details had been made and that the authority was still studying the environmental report and gathering input from the public.

Concerns over effects on the Bronx were great enough that the M.T.A. tinkered with the plan to consider a flat toll for all vehicles rather than a higher levy for heavy trucks, hoping to divert fewer trucks — major sources of air pollution — through the borough. However, the strategy might also reduce the benefits in the congestion zone in Manhattan.

Supporters of congestion pricing say it will be a vital tool in the city’s fight against climate change. They note that the M.T.A.’s research shows that significantly reduced pollution in the dense congestion zone — with some of the poorest air quality in the region — would outweigh smaller increases in pollution around the Cross Bronx and other hot spots. They now fear that the sensitivity surrounding such an outcome might result in a diluted version of the program, muting the potential benefits the entire region — including the Bronx — would see.

Congestion pricing is expected to encourage more drivers to switch to mass transit. And the tolls would provide around $1 billion annually in desperately needed funding for infrastructure improvements to public transit that is relied on by many residents of the Bronx and other boroughs.

“To the extent there are any real, localized issues, they will be resolved with complementary policies,” said Danny Pearlstein, a spokesman for Riders Alliance, a grass-roots organization of transit riders. “I don’t see this as a stark trade-off.”

The Environmental Protection Agency’s standard for long-term exposure to air pollutants known as PM2.5, or particulate matter 2.5 micrometers in diameter or smaller, is no more than 12 micrograms per cubic meter. In the worst case presented in the M.T.A.’s study, the total concentration around the Cross Bronx would increase to 11 from 10.9. The microscopic PM2.5 pollution, such as soot, can lodge itself into the lungs and cause respiratory problems.

Some scientists say that any deterioration in air quality around the Cross Bronx, no matter how small, would be significant.

“Considering that the South Bronx is an area with already high asthma rates and other pre-existing health conditions, even a small increase in long-term exposure to particulate matter will exacerbate these health outcomes,” said Francesca Dominici, a professor of public health at Harvard University.

There is also growing concern among air quality experts that federal safety standards are too permissive.

The E.P.A. says it is reviewing current standards for soot because they “may not be adequate to protect public health and welfare.” The agency has not proposed new levels, but the World Health Organization’s guideline for long-term exposure to PM2.5 is no more than 5 micrograms per cubic meter.

The congestion pricing zone would run from the Battery to 60th Street and is expected to reduce traffic across the entire New York City region. But there are boroughs, counties and neighborhoods that are likely to see an increase.

A number of car and truck drivers traveling between New Jersey and Long Island are expected to get around the new tolls by going via Staten Island or the Bronx instead. These detours would be most pronounced at the Robert F. Kennedy Bridge in Queens, across the South Bronx and the George Washington Bridge and to the south across the Verrazzano-Narrows Bridge and Staten Island.

Manhattan’s lower third would reap the greatest relief from traffic and pollution. At a minimum, under conditions considered in the M.T.A.’s report, that area could have 12 percent less traffic and 11 percent less PM2.5 within just a year. The increases in pollution in outlying areas would probably be smaller, but officials from those areas, already upset by the tolls’ financial impact on their residents, are seizing on the environmental impact as well.

“I don’t understand why we would want to embrace this,” the Staten Island borough president, Vito J. Fossella, said. “I’ve been very troubled by congestion pricing since the beginning.”

In the Bronx, where many communities have a bitter history with harmful public policies, studies have linked truck exhaust to high asthma rates. According to the most recent statistics from New York’s health department, people of all ages in the Bronx were hospitalized for asthma at rates that vastly outpaced city and state rates from 2017 through 2019. The worst rate was for children under the age of 5.

Janno Lieber, the M.T.A.’s chairman, said in an interview with WNYC last month that he shares the goal “of minimizing and mitigating any impact to a neighborhood like the South Bronx, which has suffered environmental justice impacts unfairly historically.”

For residents along the Cross Bronx, among the busiest roads in New York, just one more truck would feel like too many. “I can’t deal with it. I’m going crazy,” said Valerie Medina, a longtime Mount Hope resident. Ms. Medina, 47, complained that the cacophony of car horns, rumbling truck engines and other noises from the road wake her at night while the dirty air soils her clothes.

The South Bronx has no official boundaries. But many see the Cross Bronx Expressway as the northern border of the area and a leading cause of the urban decay and poverty that had long been synonymous with the South Bronx.

The Cross Bronx was built between 1948 and 1963 to make it easier for drivers to pass through the city. As part of Interstate 95, it connects drivers to New Jersey along the George Washington Bridge. Over 187,000 vehicles travel along the roadway a day.

It took 15 years to build, in part because engineers blasted through the hard rock beneath densely populated residential neighborhoods. Some urban planning experts blame the road for driving thousands of families away, weighing on property values and poisoning the air.

It is a scar on the Bronx, littered with garbage and stuffed with traffic that crawls at a pace so slow that enterprising street vendors selling bottled water, chips and candy walk up to car windows while motorists sit in gridlock.

Earlene Wilkerson, 63, who said she suffers from asthma along with her children and grandchildren, has lived in the High Bridge neighborhood near the Cross Bronx’s interchange with the Major Deegan Expressway for more than 40 years. She has vivid memories of her eldest daughter spending a year in the hospital because she couldn’t breathe properly.

“They were out of school a lot,” Ms. Wilkerson said as she rested on a bus stop bench, too out of breath herself to walk back up to her fifth-floor apartment. “Now, the grandchildren are going through the same thing.” 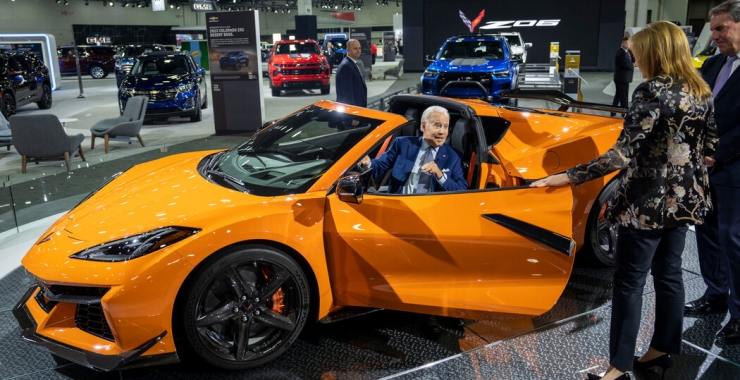 DETROIT — President Biden, a self-described “car guy” and Corvette owner, toured the North American International Auto Show in Detroit on Wednesday and announced the approval of an initial $900 ...
Continue Reading