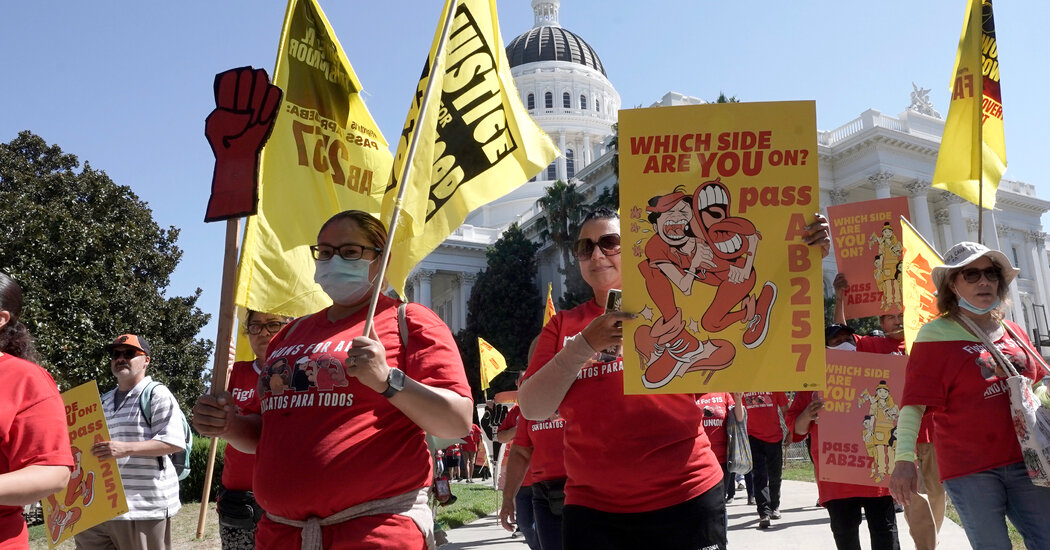 The California State Senate passed a bill on Monday that could transform the way the service sector is regulated by creating a council to set wages and improve working conditions for fast-food workers.

The measure, known as A.B. 257, passed by a vote of 21 to 12. The State Assembly had already approved a version of the measure, and it now requires the approval of Gov. Gavin Newsom, who has not indicated whether he will sign it. The bill was vehemently opposed by the fast-food industry.

“In my view, it’s one of the most significant pieces of state employment legislation that’s passed in a long time,” said Kate Andrias, a labor law expert at Columbia University. “It gives workers a formal seat at the table with employers to set standards across the industry that’s not limited to setting minimum wages.”

While sectoral bargaining is common in Europe, it is rare in the United States, though certain industries, like auto manufacturing, have arrangements that approximate it. The California bill wouldn’t bring true sectoral bargaining — which involves workers negotiating directly with employers, instead of a government entity setting broad standards — but incorporates crucial elements of the model.

The bill would set up a 10-member council that would include worker and employer representatives and two state officials, and that would review pay and safety standards across the restaurant industry.

The council could issue health, safety and anti-discrimination regulations and set an industrywide minimum wage. The legislation caps the figure at $22 an hour next year, when the statewide minimum wage will be $15.50. The bill also requires annual cost-of-living adjustments for any new wage floor beginning in 2024.

Restaurant chains with at least 100 locations nationwide would come under the council’s jurisdiction — including companies like Starbucks that own and operate their stores as well as franchisees of large companies like McDonald’s. Hundreds of thousands of workers in the state would be affected.

The council would shut down after six years but could be reconvened by the Legislature.

Mary Kay Henry, the president of the nearly two-million-member Service Employees International Union, which pushed for the legislation, said it was critical because of the challenges that workers have faced when trying to change policies by unionizing store by store.

“The stores get closed or the franchise owner sells or the multinational pulls the lease for the real estate,” Ms. Henry said.

Franchise industry officials say it is extremely rare to close a store in response to a union campaign. Starbucks recently closed several corporate-owned stores across the country where workers had unionized or were trying to unionize, citing safety concerns like crime, though the company also closed a number of nonunion stores for the same stated reasons.

Industry officials argue that the bill will raise labor costs, and therefore menu prices, when inflation is already a widespread concern. A recent report by the Center for Economic Forecasting and Development at the University of California, Riverside, estimated that employers would pass along about one-third of any increase in labor compensation to consumers.

“We are pulling the fire alarm in all states to wake our members up about what’s going on in California,” said Matthew Haller, the president of the International Franchise Association, an industry group that opposes the bill. “We are concerned about other states — the multiplier effect of something like this.”

Ingrid Vilorio, who works at a Jack in the Box franchise near Oakland, Calif., and who pressed legislators to back the bill during several trips to Sacramento, the state capital, said she believed the measure would lead to improvements in safety — for example, through rules that require employers to quickly repair or replace broken equipment like grills and fryers, which can cause burns.

Ms. Vilorio said she also hoped the council would crack down on problems like sexual harassment, wage theft and denial of paid sick leave. She said she and her co-workers went on strike last year to demand masks, hand sanitizer and the Covid-19 sick pay they were entitled to receive.

Jack in the Box did not respond to a request for comment.

Mr. Haller said state agencies were already authorized to crack down on employers who violate laws governing the payment of wages, safety, discrimination and harassment.

“The state has the existing tools at its disposal,” Mr. Haller said. “They should be more fully funded rather than put a punitive target on a subsection of a sector.”

Mr. Haller and other opponents have cited a critique by the state’s Department of Finance arguing that the bill “could lead to a fragmented regulatory and legal environment for employers” and “exacerbate existing delays” in enforcement by increasing the burden on agencies that oversee existing rules. The bill does not provide additional funding for enforcement agencies.

David Weil, who under President Barack Obama oversaw the agency that enforces the federal minimum wage, said that, while funding is critical for labor regulators, the new council could benefit a broad swath of workers even without additional funding. For example, he said, raising the minimum wage for fast-food workers could increase wages for workers in other sectors, like retail, that compete with fast-food restaurants for labor.

But Dr. Weil agreed that creating new standards in the fast-food industry could end up drawing resources away from the enforcement of labor and employment laws in other industries where workers may be equally vulnerable.

Opponents managed to secure a number of concessions in the State Senate, such as preventing the council from creating sick-leave or paid-time-off benefits, or rules that restrict scheduling.

The Senate also eliminated a so-called joint liability provision, which would have allowed regulators to hold parent companies like McDonald’s liable for violations by franchise owners.