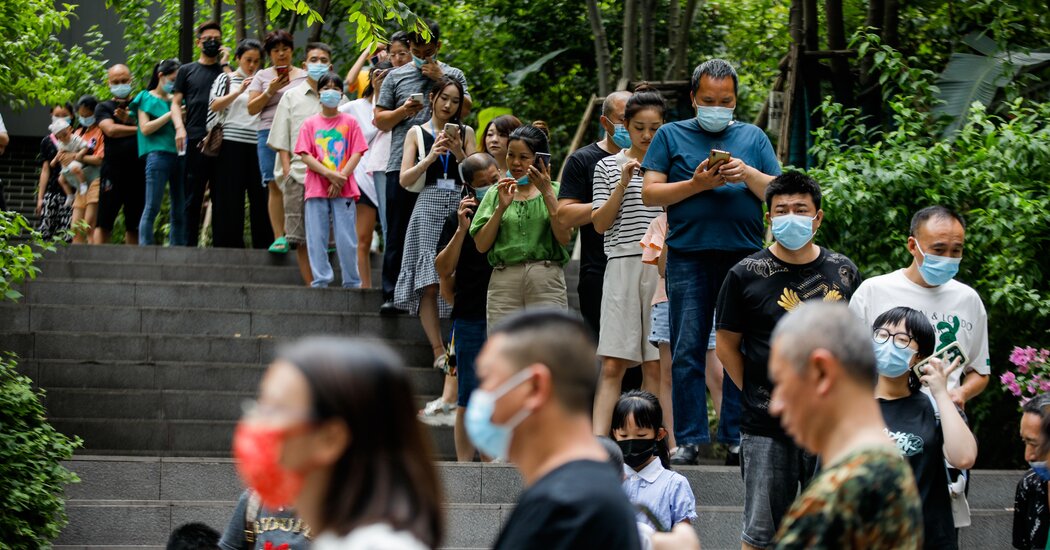 As fire was raging in the mountains surrounding the southwestern Chinese metropolis of Chongqing, 10 million residents stood in 100-plus-degree heat to get Covid tests. Two cases were detected that day in August.

A week earlier in Xiamen, in the country’s southeast, pandemic workers swabbed the throats of fishermen before they tested their catch of fish and crab. Cars got swabbed, too, at an auto show last week in Chengdu, in the southwest.

When a strong earthquake struck Chengdu on Monday, the first instinct of many residents was not to run for safety but to ask for permission to leave their homes under lockdown. “Don’t come downstairs! @all,” a property manager warned in a group chat. In Luding County, the epicenter of the earthquake, which killed at least 86 people, the local government told residents to make sure they got tested every day.

As much of the world tries to move on from the pandemic, the Chinese Communist Party clings to it, turning its zero-Covid policy into a political campaign that mandates the participation of 1.4 billion people.

In their precarious existence filled with lockdowns, quarantines and mass testing, the Chinese public puts up a show, 24/7, for an audience of one: the country’s top leader, Xi Jinping, who is expected to secure a third term at an important Communist Party congress next month.

Some people play their roles with enthusiasm, others with indifference or resentment. No matter what, the Kafkaesque show must go on until Mr. Xi says, “Stop.”

The zero-Covid campaign is probably the clearest testament to the power of Mr. Xi, who proved that he is as capable of mobilizing the masses as Mao Zedong, the founder of the People’s Republic of China, who launched the Great Leap Forward and the Cultural Revolution.

Mao didn’t care that people starved to death or that the country was thrown into chaos in those two disastrous campaigns. Mr. Xi doesn’t seem to care that his campaign has been extremely disruptive even as the coronavirus has become much milder, if more transmittable.

His strategy has contained the pandemic. China reports fewer than 2,000 new cases each day of late, most of them asymptomatic. The country has reported 5,226 Covid-related deaths since early 2020 and none since May, according to the National Health Commission.

China’s authoritarian approach proved especially effective in much of 2020 and 2021, when the United States and Europe were struggling with high death and infection rates. Mr. Xi has been using the temporary success as evidence that China’s top-down governance model is superior to that of liberal democracies. He refuses to abandon his old playbook of lockdowns, mass testing and quarantines in favor of learning to coexist with the milder variants that emerged this year.

As of Tuesday, 49 Chinese cities were imposing some sort of lockdown measures, affecting around 292 million people, up from 161 million in the previous week, according to the investment bank Nomura. It’s taking a serious economic toll. At the beginning of the year, Nomura expected China’s economy to grow 4.3 percent in 2022. After successive rounds of lockdowns, it lowered its forecast to 2.7 percent.

The Communist Party has defended its policy, saying that relaxing the Covid restrictions could cause widespread infections in a country with limited medical resources and a large population of older people, among whom 15 percent are not fully vaccinated. The party said it would crack down on any speech or behavior that distorted, questioned or disapproved of the policy.

Many Chinese buy into the narrative and willingly act as foot soldiers in the party’s fight against the virus.

Last week, passengers on a bus in the northeastern city of Dalian scolded a man for wearing merely a surgical mask, not an N95 respirator mask that the local government required in an announcement a few hours earlier. “Get off the bus!” they yelled at the man, according to official Chinese media. “You’re wicked.” One of the passengers called the police, who led him off the bus.

Dalian reported 40 Covid infection cases, all asymptomatic, that day. The next day the government locked down the city of seven million people and suspended all public transportation.

A tech writer shared in a WeChat post last weekend that he and his wife had caught Covid in Singapore, and that they, as well as the city-state, were doing just fine — far from the horror stories that many Chinese people were led to believe. The pandemic was over for most countries in the world, he declared.

“You’re doing fine,” a reader in Beijing commented, “but can you be sure the others will be fine, too? So selfish. Unfollowed. 😡”

What gives the campaign the most Kafkaesque quality is that no matter how bizarre, absurd or illogical the rules are, most people follow them without question.

When China’s national team played in the 2022 Asian Women’s Volleyball Cup in the Philippines last month, the players followed instructions from higher-ups to wear masks and lost their first set against Iran. The team won the match after the players took off the masks.

A woman living in a small city in northwestern China told me that she’d had many arguments with her husband and her parents after they told her to stop complaining about Covid restrictions. Everyone was following the rules, they scolded her, why couldn’t you?

She shared photos and videos of pandemic life in her small town last week. Loudspeakers started blasting at 5 a.m., urging residents to get tested. For hours, the same piercing instructions would blare throughout the city: “Property owners, please come down to get Covid tests. It will end at 9.”

Her 5-year-old daughter was always eager to get tested, she said, because otherwise she wouldn’t be able to go out and play with her friends.

After each Covid test, a person gets a sticker, and most put it on the back of their phones, said the woman, who spoke on the condition of anonymity for safety reasons. The sticker is different every day. It could be a cartoonish drawing of a police officer, a volunteer or a famous historical figure.

Residents have to show the stickers to security guards in office buildings, residential compounds, shopping malls and schools. Without it, they can’t move around.

Local authorities have become increasingly harsh in punishing those who don’t follow the zero-Covid rules. In recent months, many people were detained by the police for five to 10 days for failing to get Covid tests. Officers in the northwestern province of Shaanxi detained a 20-year-old man for five days in August because he had skipped two Covid tests and had ridden a bike. His behavior “posed risks of spreading the virus,” they said.

Pandemic control workers, in their white hazmat suits, have come to embody the absurdity and the brutality of the campaign.

Nicknamed Dabai, or Big White, they are omnipresent. They rode on horseback to test Tibetan herdsmen. They walked in heavy snow in China’s westernmost county to swab the throats of border patrol agents. They even regularly tested the staff in China’s research stations in Antarctica.

There’s no way to avoid the Big White.

In a widely shared video on Chinese social media, a giant inflated Big White rose over the city of Wuhan, where the coronavirus was first reported.

“The white terror” and “The Big White is watching you” are among the most-liked comments. So is “Please test the Yangtze River Bridge,” which refers to the bridge in the video.

There’s a growing wariness about how long the zero-Covid campaign could last and how much more absurd it could become.

Last week, after Chengdu was locked down, many people shared their thoughts on the last Weibo post by Dr. Li Wenliang, the coronavirus whistle-blower in Wuhan who was punished by the government before he died of Covid in February 2020. The comments section has become a sort of digital Wailing Wall for the country.

“Dr. Li, the past three years under the pandemic felt like a life covered with dust,” wrote the user @dakouboluobao. “From anger to powerless to numb. When is this going to end?”