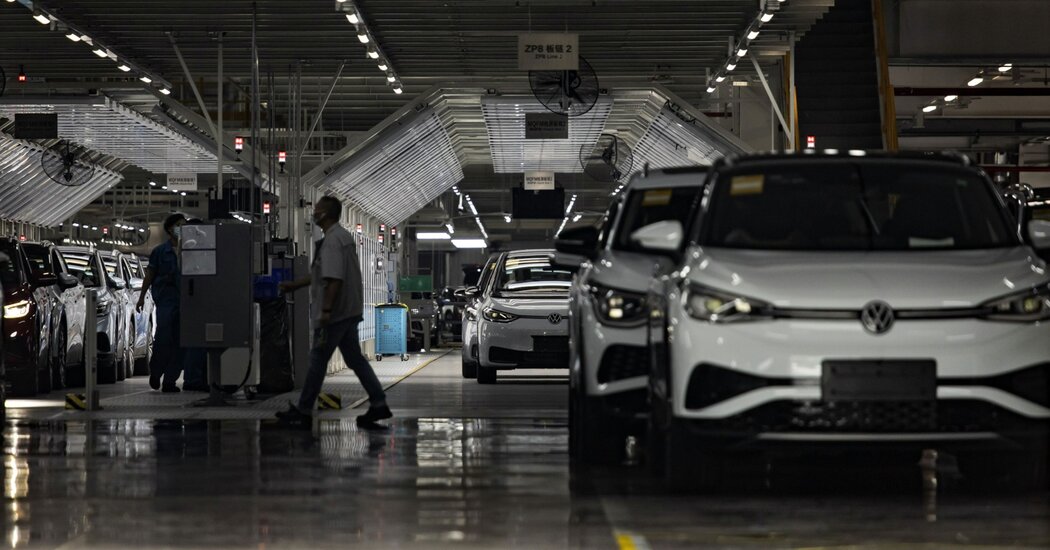 BEIJING — European corporate investment in China, a key source of Western technology and capital since China began opening up its economy four decades ago, is falling steeply and now mostly limited to a handful of multinationals, three new reports show.

The slackening in investment is the latest in a series of ominous signs for the Chinese economy. The real estate market is slumping, with prices declining in many Chinese cities as the volume of transactions plummets. Consumer spending is drying up because of stringent “Covid zero” policies that have led to lockdowns in many cities. And American investment in China is also faltering because of geopolitical tensions.

China’s published statistics for foreign direct investment show that it is gradually rising overall. But the bulk of what China counts as foreign investment is money arriving from Hong Kong, which tends to be composed of mainland money that has been briefly routed through Hong Kong as a tax-minimization measure.

A new analysis by Rhodium, a New York research firm, shows that so-called greenfield investments from the European Union and Britain in new factories and other installations have plunged.

A handful of German manufacturers, like Volkswagen, account for the bulk of the few European investments still being made in China. They raise money for these investments mostly by keeping in China the profits generated by their Chinese subsidiaries instead of sending money from their home country.

“A few big firms are propping up the numbers there,” said Noah Barkin, the managing editor of Rhodium’s China practice. “Many others are reassessing their presence” The European Chamber of Commerce in China said in another report, issued in Beijing on Wednesday morning, that European companies had been frustrated by the difficulty of getting executives and employees from abroad into China, which has tightly limited international travel to reduce the risk of coronavirus outbreaks.

Before the pandemic, China allowed six million to seven million international arrivals per month. But in July, the latest month with data available, it was only 146,000 people — up from almost none at the same time last year but still a tiny fraction of the three million flying into Singapore this July.

China’s economy grew just 0.4 percent from a year earlier in the second quarter, an anemic rate that has made the Chinese market less attractive for foreign investment.

Joerg Wuttke, the chamber’s president, said that no new European company had entered the Chinese market since the start of the pandemic and that all but the largest European companies were losing interest.

“They don’t even want to consider China,” he said, adding that companies’ preferences are “clearly Southeast Asia, India and other parts of the world.”

On Tuesday, the Swedish Chamber of Commerce in China released a survey of its members that also found many of them pessimistic about the investment climate in China. The Swedish group’s members were concerned about stringent pandemic controls, including quarantines often of 11 nights for people arriving from overseas as well as other limits on international travel.

China’s willingness to buy imports, from luxury products to factory gear, is also slowing, the chamber said. China has sought to build more self-reliance through programs like “Made in China 2025,” which give preference to domestic manufacturing over imports.

Unlike the United States, Europe ran only small trade deficits with China before the pandemic. But China bought only $112 billion worth of European goods in the first half of this year, while exporting $302 billion. The widening imbalance has made European companies and countries more willing to raise concerns about Chinese policies.

In its report, the European chamber recommended a series of policies to China’s government to revive foreign investment. These include making it easier for European airlines to fly to China and not fostering Chinese consumer boycotts of European goods over disputes like China’s human rights policies.