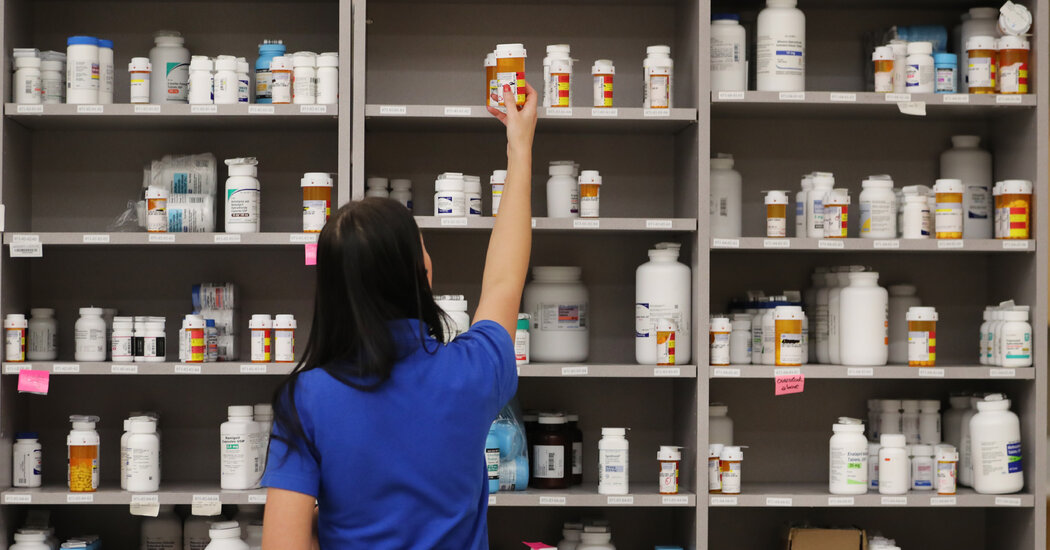 Every five years, top officials of the Food and Drug Administration go behind closed doors to negotiate the terms of its core budget — about $3 billion this year.

But the F.D.A. is not at the table with members of Congress or with White House officials. Instead, it’s in dozens of meetings with representatives of the giant pharmaceutical companies whose products the agency regulates. The negotiations are a piece of the “user fee” program in which drug, device and biotech companies make payments to the agency partly to seek product approvals. The fees have soared since the program’s inception three decades ago and now make up nearly half of the F.D.A.’s budget and finance 6,500 jobs at the agency.

The pharmaceutical industry funding alone has become so dominant that last year it accounted for three-quarters — or $1.1 billion — of the agency’s drug division budget.

Details of the program are being debated in Congress, which faces a deadline of Sept. 30 to approve legislation that would reauthorize the agency’s power to collect the fees. The pharmaceutical lobby says its role in funding the agency has helped speed approvals of lifesaving drugs to the market by providing it with the resources to do the work. But advocates for patients and doctors say the agreements have enabled the industry to weaken the approval process meant to ensure that drugs are safe and effective.

“It’s kind of like a devil’s bargain,” said Dr. Joseph Ross, a professor at the Yale School of Medicine who has studied F.D.A. policies, “that I think is not in the best interest of the agency, because it turns this every-five-year cycle into the F.D.A. essentially asking industry, ‘What can we do to secure this money?’ ”

In recent weeks, the user fee bill in Congress became snagged by added provisions, including over an effort to speed approval of generic drugs that could cut into the big companies’ profits and make the drugs less expensive for consumers and insurers. A key Republican senator and the major pharmaceutical lobby opposed that provision.

Versions of the bills in the House and Senate also included a raft of extra proposals that would require annual inspections of infant formula makers and increase oversight of cosmetics, diagnostic tests, dietary supplements and food packaging.

Those measures may not survive final haggling over reauthorizing the program in Congress, where the drug and device industries spend hundreds of millions on lobbying and campaign contributions. Senator Richard Burr, Republican of North Carolina and the leading member of the main Senate committee overseeing the agency, opposed the amendment that would allow the F.D.A. to help generic drug makers replicate an off-patent drug with specifics on the ingredients, which for years had tended to be more of a guessing game.

The Congressional Budget Office estimated that the generic drug measure could save taxpayers $546 million over 10 years by speeding those versions to market. But Mr. Burr argued that it would hamper innovation and, objecting to another amendment limiting drug exclusivity, voted against the bill in June. In July, he introduced a stripped-down user fee bill to reset negotiations.

Senator Patty Murray, Democrat of Washington and chairwoman of the Senate committee that oversees the F.D.A., issued a statement Wednesday underscoring the urgency of the moment.

“At every single phase in this process, I‘m laser focused on patients — and making sure F.D.A. works for families, not pharmaceutical companies’ bottom lines,” Ms. Murray said.

In committee hearings this summer, senators debated the merits of the user fee program.

Senator Bernie Sanders, an independent of Vermont and a longtime critic of the drug industry, suggested that the pharmaceutical companies’ tendency to charge “outrageous” prices was related to their significant role in funding and advancing policy goals of the F.D.A.’s drug division.

“So the industry, in a sense, is regulating itself,” Mr. Sanders said during a hearing on June 14 of the Senate Health, Education, Labor & Pensions Committee. “May make sense to somebody — but not to me.”

Mr. Burr, a business-focused conservative, complained that the program burdens companies with negotiating with the agency over the fees, which he predicted would rise even higher. He has also complained about how the high costs of the program limit opportunity for small businesses; new-drug application fees are $1.5 million to $3.1 million.

“In a perfect world, I hope we would all be here lobbying that there are going to be no user fees paid to the F.D.A. by anybody,” he said during the hearing. Ultimately, the White House and Congress have final say over the agency’s priorities.

Even Dr. Robert Califf, the F.D.A. commissioner, acknowledged in a news briefing this summer that the program was not ideal. “Philosophically, I wish the taxpayer paid for all the F.D.A. and there weren’t user fees,” he said.

A spokeswoman for the F.D.A. said agency policy prohibited officials from commenting on pending legislation.

The user fee program traces its roots to 1992, when AIDS activists pressed the F.D.A. to hasten drug approvals. About a decade later, drugs moved through the pipeline more quickly, averaging about 10 months from roughly 19 months.

User fees were added for medical devices, generic drugs and biologics, which include vaccines and gene therapies. (The tobacco division and its 1,200 employees are entirely user-fee funded, though the industry has no say in how the dollars are spent.) By 2012, drug companies accounted for half of the F.D.A. drug division budget, through fees for new-drug applications and annual payments for approved drugs.

He said he was surprised that user fee negotiations in 1997 led to reducing the number of clinical trials for drug approval to one, from the longtime standard of two trials. He said it was also notable that the 2012 user fee law allowed “fewer, smaller or shorter clinical trials” for therapies for life-threatening conditions.

“The faster you’re rushing to approval and the less clinical evidence that you’re requiring,” Dr. Mitchell said, “the greater the chances that you’re going to miss something” that could harm patients.

Some F.D.A. drug approvals based on uncertain evidence have proved highly controversial. Medicare refused to routinely pay for the Alzheimer’s drug Aduhelm, citing little evidence of benefit and serious safety risks. Another approval of a medication for a deadly muscle disease — over the objections of agency experts — drew scrutiny when insurers refused to pay for it, calling the therapy “investigational.” The agency issued those approvals on the condition that further study prove a benefit, though such reviews take years to complete.

For its part, the F.D.A. said the user fee process had given it authority to improve public health by expanding oversight of foreign drugmakers, allowing hearing aids to be sold over the counter and monitoring drug shortages.

“It’s not an understatement to say that there are many people with us today who would not be here without the program, which has dramatically reshaped drug development and approval in the United States,” Dr. Marks said.

Those testifying from industry groups PhRMA, AdvaMed and BIO, which represents the biotech industry, have noted the program’s value in ensuring the F.D.A. has the staff and technology to review a growing number of rapidly changing gene and cell therapies, novel medical devices and rare-disease therapies. The Pharmaceutical Research Manufacturers of America, known as PhRMA, called the program a “success” and said the funding made the F.D.A. a global leader in approving three-fourths of new medicines before any other nation.

The growth of the program “reflects the robust innovation and timely access to safe and effective medicines required for an appropriately staffed and funded F.D.A.,” Priscilla VanderVeer, PhRMA vice president of public affairs, said in a statement.

“It’s a great example of a meaningful public, private collaboration to get patients the products that they need,” said Scott Whitaker, president of AdvaMed, which represents medical device makers.

The pace of approvals often appears too hasty for Dr. Sanket Dhruva, a cardiologist and an assistant professor of medicine at the University of California, San Francisco. One cardiac device he recently encountered was approved after a study followed patients for only 30 days and offered no comparison against the standard treatment. It was not enough information for him to use the device on the patients he treats, he said.

Generally, he said that doctors could earn more money by adopting the newest technologies and that hospitals liked to advertise them, though clear evidence of safety and effectiveness was often lacking.

“What we end up going on is hype,” Dr. Dhruva said.

Dr. Mitchell expressed concern that new cancer drugs had been approved using tests that compared a new treatment with a placebo, a practice that F.D.A. guidance has deemed unethical, instead of testing them against standard therapies. That leaves him uncertain whether the new drugs for the cancer patients he treats are better than the old ones.

Dr. Reshma Ramachandran, co-director of the Yale Collaboration for Research Integrity and Transparency, said that doctors were not trained to sift through F.D.A. records to scrutinize the quality of the studies that led to approvals. Nor do many recognize the pressure the drug industry exerts on the F.D.A. to meet approval decision deadlines.

The latest negotiation cycle over prescription drug user fees involved about 100 meetings between the F.D.A. and drug company representatives and six meetings with groups like Dr. Ramachandran’s.

The concerns expressed about the imbalance of access — that the drug and device industries hold outsize sway compared with patient groups and public-interest advocates — have led to calls for Congress to find a way to fully fund the agency through a tax on sales or by federal appropriations.

While few see that change as likely, Dr. Mikkael Sekeres, a former F.D.A. oncology adviser who is a professor of medicine at the University of Miami, said that the F.D.A. should match its brisk pace of approvals with a system that could identify problems just as quickly.

“They don’t have a good mechanism to monitor the side effects of these drugs once they’re on the market,” said Dr. Sekeres, who recently wrote a book about the F.D.A. “So the post-marketing approval surveillance mechanism isn’t as good as it should be to guarantee the safety of the public.”