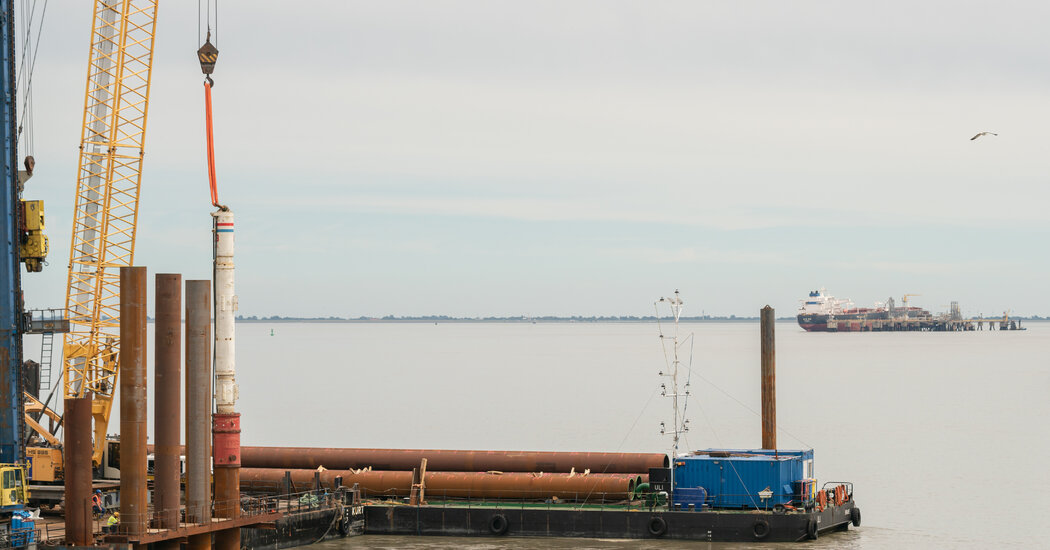 The German government on Thursday took another step toward reducing its dependence on Russian energy, reaching an agreement on acquiring a fifth facility for importing liquefied natural gas. The new facility, a floating terminal with a five-year lease, will be the second at Wilhelmshaven, a port in northern Germany that is becoming a key energy hub.

The terminal will have capacity for importing about 6 percent of Germany’s gas consumption. By backing these facilities, the government hopes to provide Germany, Europe’s largest economy, with a substantial buffer against any further cutoffs of Russian supplies.

Thursday’s deal is also a potential stride for green energy. The group of investors and companies behind the new L.N.G. terminal have ambitions to supply green energy in the form of hydrogen to Germany and other countries at a scale that might make a difference in tackling climate change, and the L.N.G. deal appears to give the group’s plans the imprimatur of the German government.

Robert Habeck, the economics and climate minister, announced the arrangement at a news conference in Berlin on Thursday along with representatives of the participating companies.

Russia’s throttling back of natural gas supplies in apparent retaliation for sanctions imposed over its war in Ukraine is forcing officials in Germany and elsewhere in Europe to go against their political instincts to bolster supplies of natural gas — a fossil fuel — by building terminals and scouring the world for supplies.

A former Green party leader, Mr. Habeck is sweetening the pill for his environmentally minded constituents by arguing that much of the infrastructure under construction to supply L.N.G. could be reused to import hydrogen, which Europe is backing as an important clean fuel of the future.

“By importing liquefied natural gas, we are making ourselves less dependent on imports of Russian pipeline gas,” Mr. Habeck said in a news release distributed by the companies. “At the same time we are accelerating the import of green hydrogen in parallel.”

Even if this newest project does not go online until after the winter, Mr. Habeck appeared optimistic that Germans would not face crucial gas shortages in the coming months. As long as energy-saving rules are observed, he said, those measures will “hopefully and probably get us through the winter without major disturbances.”

The group managing the new Wilhelmshaven terminal would begin operations by importing conventional L.N.G. in late 2023; it would then gradually shift to a liquefied gas made by mixing hydrogen that is extracted using solar or wind energy with carbon dioxide captured from industry.

“We will be building the world’s biggest hydrogen and green energy terminal,” said Marco Alverà, the chief executive of Tree Energy Solutions, a private company that is part of the group tapped to manage the new L.N.G. facility. The company has already acquired a 370-acre swath of land in Wilhelmshaven, and plans to eventually have six berths for ships on a jetty in the harbor. The French energy supplier Engie, and the German utility E.ON are also participating.

Mr. Alverà argues that Europe on its own cannot hope to generate all the renewable energy it needs to phase out fossil fuels from domestic sources. His plan, instead, is to bring in hydrogen generated from massive wind or solar farms constructed in countries like Egypt, Saudi Arabia, Australia or the United States at what he says will be very low cost.

Mr. Alverà also plans to reduce expenses by using existing infrastructure. For instance, a large global fleet of L.N.G. tankers can transport his fuel, he said.

The main owners of Tree Energy Solutions are Paul and Marcel van Poecke, brothers from the Netherlands with a long track record in investing in conventional energy facilities, including oil refineries. The company recently hired Mr. Alverà, who was chief executive of Snam, the Italian gas transmission company. He is a longstanding hydrogen fan and has written two books on the potential benefits of the fuel.