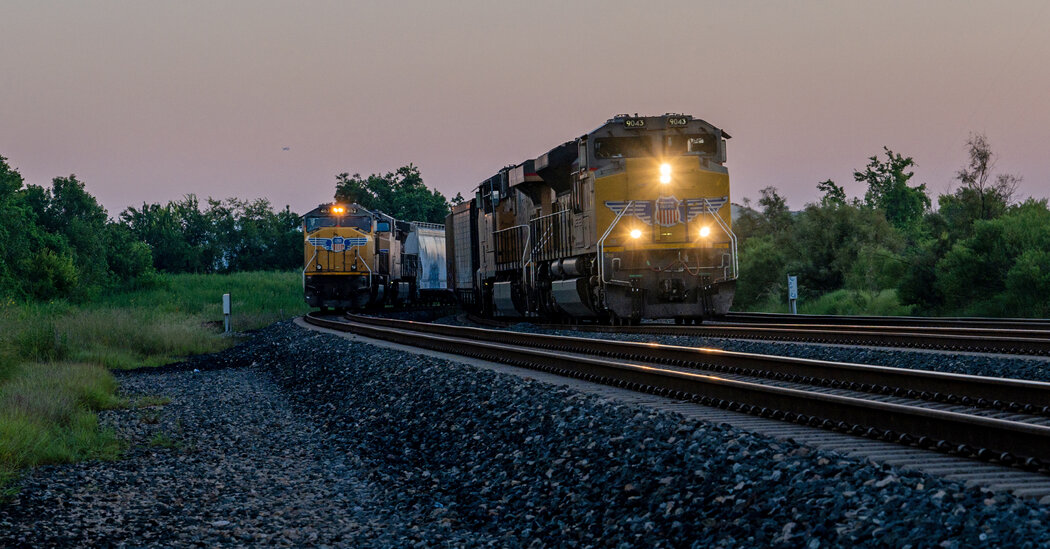 How a Rail Strike Could Reinvigorate Supply Chain Disruption

Just as the global supply chain flashes signs of returning to normal, a new crisis now threatens to disrupt the transport of a vast range of goods, from agricultural crops to lumber to coal.

If tens of thousands of rail workers follow through on threats to strike as soon as Friday in pursuit of better working conditions, that would unleash potentially monumental havoc on the system used to move products from place to place.

In a sign of how hard it could be to avoid a strike, the International Association of Machinists and Aerospace Workers District 19 said Wednesday that 4,900 of its members had rejected a tentative contract that the union had negotiated with the railroads. The Machinists union, one of a dozen at the center of complex talks among the railroads, workers and federal officials, said its members would not stop working before Sept. 29 to give negotiators time to reach a better deal with the companies.

A strike could exacerbate the congestion that has plagued American ports. It would bring fresh pressure to bear on trucking companies — the most obvious alternatives for moving freight — as they complain that they cannot find enough drivers. It would stymie the movement of goods just as politicians and the markets wrestle with soaring prices for consumer products.

“Rail’s a big deal. It’s how a lot of stuff moves,” said Phil Levy, chief economist at Flexport, a San Francisco company that manages transportation logistics for multinational companies. “There’s not a lot of slack in the trucking system.”

Rail moves roughly two-fifths of long-distance American freight and one-third of exports, making the stakes enormous. What’s more, rail is a central component of a complex global supply chain that depends on the coordinated movements of cargo ships, trains and trucks.

If any one of those elements suffers trouble, the rest quickly feel the effects.

At the center of this reality is one of the more consequential innovations in modern history: the shipping container. Ever since it emerged in 1956, it has amplified a boom in international trade.

Before the shipping container, freight of every variety had to be loaded by hand onto ships and rail cars and trucks — a messy process that was slow, dangerous and expensive. Once cargo began moving in standard size steel boxes, that process was transformed. Cranes, forklifts and other machinery were harnessed to move containers seamlessly from progressively enormous ships onto the backs of trucks and atop rail cars for the next stage of the journey.

This mode of cargo transportation — known as “intermodal” — effectively compressed geography, narrowing the seas, and easing the passage of freight across land. It was central to how the supply chain became increasingly global over the last half century, connecting American consumers to factories in Asia, and farmers in the Midwest to hungry markets on every shore the world over.

The rail network has been a key bridge from the water’s edge to points across the land.

Ships bring containers full of factory goods to American ports, while trains carry them to hubs like Chicago and Kansas City, where they are loaded with corn, wheat and other grains. Trains then carry the boxes back to coastal ports for the journey to Singapore, Shanghai and other Asian destinations, where processors turn their contents into cereals, bread and animal feed.

Container vessels bring in chemicals from China. Trains carry them to factories across the United States that use them as ingredients for paint, cleaning products and other industrial concoctions.

The rail system brings some crude oil from Canada into the United States, and sends exports of American gasoline and diesel to Mexico.

“It’s a big deal if a strike happens,” said Tom Kloza, global head of energy analysis at the Oil Price Information Service, who warned that a strike could push up gasoline prices.

The entire system has come under extraordinary strain during the pandemic.

Americans confined to their homes stopped going to restaurants, gyms and entertainment venues, and they compensated by filling their houses with kitchen appliances, exercise equipment and electronic gadgets. The result was an astonishing surge of imports that swamped the delivery system, overwhelming ports, trucking companies and rail networks.

This year, shutdowns of major ports in China as part of the country’s efforts to eradicate Covid-19 have sown fresh upheaval. Russia’s continued war in Ukraine has slashed the availability of grains produced in both countries, upending commodities markets worldwide and sowing hunger in poor countries.

The Pacific Northwest, which once imported large quantities of Russian oil, now depends more heavily on rail to bring oil from North Dakota.

The Association of American Railroads, a trade group, recently warned that a strike would inflict economic damage reaching $2 billion a day.

Despite its crucial role in the world’s largest economy, the U.S. rail system has long been described as a weak link. It has struggled to respond to surges in demand, yielding debilitating traffic jams on vital routes linking the ports of Southern California — the gateway for 40 percent of American imports — to major transit points like Chicago.

Regulators and the unions representing rail workers portray the vulnerabilities of the rail network as the outgrowth of the decision by major railroads to reward their shareholders at the expense of their customers. In the five years before the pandemic, nearly one-fourth of rail workers lost their jobs.

The cuts came as part of what the industry calls Precision Scheduled Railroading, in which the carriers limit service to reduce their costs.

“Railroads are carrying less freight today than they were in 2006 while rates have gone up,” said Martin J. Oberman, chairman of the Surface Transportation Board, the federal body that regulates railroads, during a speech last fall. “Over the last six to seven years, through ever increasing pressure from Wall Street,” he added, “the railroads’ emphasis has not been on growth. Rather, the emphasis has been on cutting.”

Over the previous decade, the five largest railroads had spent $114 billion to buy back their shares — a course of action intended to boost stock prices — rather than using that money to bolster their routes, said Mr. Oberman, who was appointed by President Biden.

In the unions’ telling, the railroads are now exploiting the crisis they created — a crucial lack of capacity — to fan fears of disruption in seeking leverage toward denying their workers fair compensation.

Understand Inflation and How It Affects You

“The railroads are using shippers, consumers, and the supply chain of our nation as pawns in an effort to get our unions to cave into their contract demands,” said two leading unions, the International Association of Sheet Metal, Air, Rail and Transportation Workers and the Brotherhood of Locomotive Engineers and Trainmen Teamsters Rail Conference, in a joint statement last week. “Congress must not cave in to what can only be described as corporate terrorism.”

The rail companies say they have reconfigured their operations to become more nimble and say a strike would harm a host of industries, from retail to chemicals to construction.

“Tens of thousands of rail customer locations, from sprawling auto plants to mom-and-pop retailers, depend on railroads to deliver raw materials and finished products,” the rail association recently said.

Whatever the roots of the conflict, the prospect of a potent new barrier to cargo distribution has spooked a White House already under grave pressure from inflation.

“The president has been engaged,” Karine Jean-Pierre, the White House press secretary, said Tuesday. “We have made crystal clear to the interested parties the harm that American families, businesses and farmers and communities would experience if they were not to reach a resolution.”

In preparation for a strike, she added, the administration was exploring transportation alternatives, including air, sea and ground shippers.

The trouble is that all of those other industries have been dealing with their own problems. Though shipping and trucking rates have been falling this year after soaring during the first two years of the pandemic, a rail strike would surely reverse that trend.

A disruption to the rail system would be the equivalent of “a half a million trucks going off line,” said Oren Zaslansky, chief executive officer of Flock Freight, which pools partial truck shipments to boost the capacity of the existing fleet. “This would be pretty painful in any context, and we finally just got this thing calmed down.”

Agricultural exporters would be especially vulnerable. In recent months, farming operations have struggled to gain access to shipping containers as ocean carriers have concentrated available boxes on their most lucrative routes, from Asia to Southern California.

That situation has improved in recent weeks, after the passage of a new law and a threatened crackdown from the Federal Maritime Commission. But if rail links are limited, farmers in the center of the country could again find it difficult to secure containers, widening the distance between their grain elevators and their customers on the other side of the water.

A strike could also make it harder for American importers to deal with the effects of another contentious labor negotiation — that between 22,000 dockworkers at West Coast ports and the operators of shipping terminals.

In anticipation of potential troubles, retailers bringing in goods from Asia have diverted shipments from West Coast ports to East Coast landing points like Charleston, S.C., Newark and Savannah, Ga. They figured they could rely on rail and trucking to deliver their containers to their final destinations.

“Trucking rates are likely to increase and delays could become quite extensive,” said Spencer Shute, a senior consultant at Proxima, a supply chain consultancy. “This could be catastrophic for the U.S. economy.”