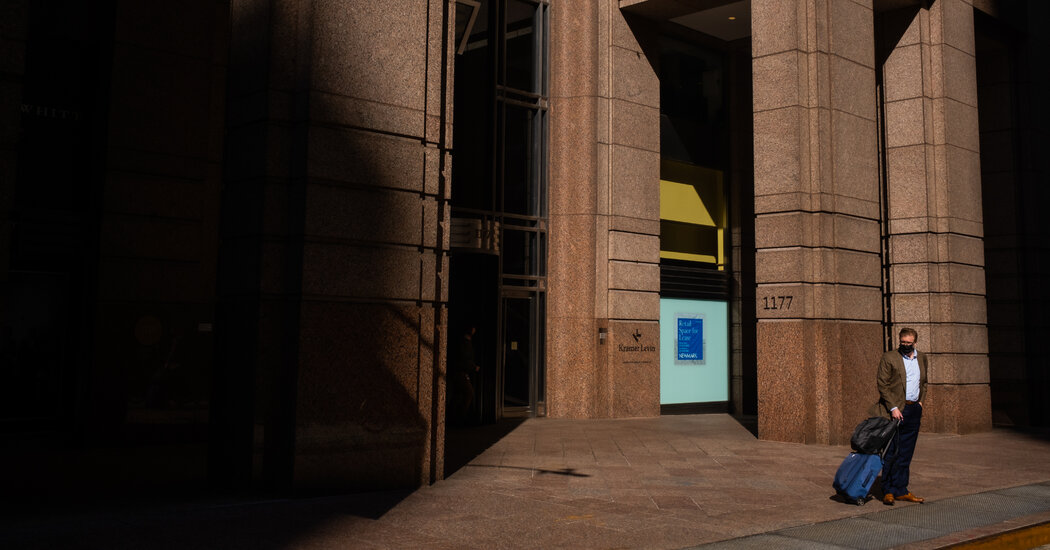 The darkest days of the pandemic are far behind New York City. Masks are coming off, Times Square is packed with tourists and Midtown Manhattan lunch spots have growing lines of workers in business suits. Walking around the city, it often feels like 2019 again.

But the bustling surface obscures a lingering wound from the pandemic. While the country as a whole has recently regained all of the jobs it lost early in the health crisis, New York City is still missing 176,000, representing the slowest recovery of any major metropolitan area, according to the latest employment data.

New York relies more than other cities on international tourists, business travelers and commuters, whose halting return has weighed on the workers who cater to them — from bartenders and baggage handlers, to office cleaners and theater ushers. A majority of the lost private sector jobs have been concentrated in the hospitality and retail industries, traditional pipelines into the work force for younger adults, immigrants and residents without a college degree.

By contrast, overall employment in industries that allow for remote work, such as the technology sector, is back at prepandemic levels.

The lopsided recovery threatens to deepen inequality in a city where apartment rents are soaring, while the number of residents receiving temporary government assistance has jumped by almost a third since February 2020. As New York emerges from the pandemic, city leaders face the risk of an economic rebound that leaves thousands of blue-collar workers behind.

“The real damage here is that many of the industries with the most accessible jobs are the ones that are still struggling to fully recover,” said Jonathan Bowles, the executive director of the Center for an Urban Future, a public policy think tank.

New York City was hit particularly hard by the first wave of the virus, prompting business closures and employer vaccine mandates that were among the longest and strictest in the country. Part of the reason for New York’s lagging recovery is that it lost one million jobs in the first two months of the pandemic, the most of any city.

More recently, New York City has regained jobs at a rapid clip. The technology sector actually added jobs in the first 18 months of the pandemic, a period when almost every other industry shrank.

But job growth slowed this summer in sectors like hotels and restaurants compared with a year ago, while businesses in technology, health care and finance increased employment at a faster pace over the same period, according to an analysis by James Parrott, an economist at the Center for New York City Affairs at the New School.

In July, the city’s unemployment rate was 6.1 percent, compared with 3.5 percent in the country overall that month.

At the height of the pandemic, Ronald Nibbs, 47, was laid off as a cleaner at an office building in Midtown Manhattan, where he had worked for seven years. Mr. Nibbs, his girlfriend and his two children struggled on unemployment benefits and food stamps.

He secured temporary positions, but the work was spotty with few people back in offices. He did not want to switch careers, hoping to win his old position back. He began to drink heavily to deal with the anxiety of unemployment.

In May, his building finally called him back to work. “When I got that phone call, I wanted to cry,” Mr. Nibbs said.

There are 1,250 fewer office cleaners in the city now than there were before the pandemic, according to Local 32BJ of the Service Employees International Union.

Last month, New York officials cut their jobs growth forecast for 2022 to 4.3 percent, from 4.9 percent, saying the state was not expected to reach prepandemic levels of employment until 2026. Officials cited the persistence of remote work and the migration of city residents away from the state as a long-term risk to employment levels.

The number of tourists visiting New York City this year is expected to rebound to 85 percent of the level in 2019, a year in which a record 66.6 million travelers arrived, according to forecasts from NYC & Company, the city’s official tourism agency.

However, according to the agency, visitors to the city are spending less money overall because those who have historically stayed longer — business and international travelers — have not returned at the same rates. This has hurt department stores that depend on high-spending foreign visitors, as well as hotels that rely on business travelers to book conferences and banquets.

Ilialy Santos, 47, returned to her job as a room attendant this month at the Paramount Hotel in Times Square, which is reopening for the first time since March 2020. The hotel had been a candidate to be converted into affordable housing, but the plan was opposed by a local union, the New York Hotel and Gaming Trades Council, in order to save jobs.

Ms. Santos said she could not find any employment for two years, falling behind every month on her bills. The hotel union provided a $1,000 payment to her landlord to help cover her rent.

“I’m excited to be going back to work, getting back to my normal life and becoming more stable,” Ms. Santos said.

Despite the city’s elevated unemployment rate, many employers say they are still struggling to find workers, especially in roles that cannot be done remotely. The size of the work force has also dropped, declining by about 300,000 people since February 2020.

Some blue-collar employees who lost their jobs early in the pandemic are now holding out for positions that would allow them to work from home.

Jade Campbell, 34, has been out of work since March 2020, when the pandemic temporarily shuttered the Old Navy store where she had worked as a sales associate. When the store called her back in the fall, she was in the middle of a difficult pregnancy, with a first-grade son who was struggling to focus during online classes. She decided to stay home, applying for different types of government assistance.

Ms. Campbell now lives on her own in Queens without child care support; her children are 1 and 8 years old. She has refused to get vaccinated against Covid-19, a prerequisite in New York City for many in-person jobs. Still, she said she felt optimistic about applying for remote customer service roles after she reached out to Goodwill NYNJ, a nonprofit, for help with her résumé.

“I got two kids I know I have to support,” she said. “I can’t really depend on the government to help me out.”

At Petri Plumbing & Heating in Bay Ridge, Brooklyn, several workers quit over the city’s policy that employees of private businesses be fully vaccinated. The restriction was the most stringent in the country when it was announced in December 2021 at the end of Mayor Bill de Blasio’s term.

After Mayor Eric Adams signaled earlier this year that his administration would not enforce the mandate, Michael Petri, the company’s owner, offered to rehire three former workers. One returned, another had found another job and the third had moved to another state, he said.

Thanks to a $50 hourly wage and monthly bonuses, current job openings at Petri Plumbing have attracted a flood of applicants. In a shift from before the pandemic, Mr. Petri said he now has to wade through more applicants with no plumbing experience.

The strongest candidates often have too many driving infractions to be put on the company’s insurance policy, he said. But recently, Mr. Petri was so desperate to hire a mechanic with too many infractions that he recruited a young worker just to drive him.

“This is without a doubt one of the more difficult times we have faced,” said Mr. Petri, whose family started the company in 1906.

The disruptions have set the city’s youngest workers back the most. The unemployment rate for workers ages 16 to 24 is 20.7 percent.

After graduating from high school in 2020, Simone Ward enrolled in community college but dropped out after a few months, feeling disengaged from online classes.

Ms. Ward, 20, signed up for a cooking program with Queens Community House, a nonprofit organization, which allowed her to get a part-time job preparing steak sandwiches at Citi Field during baseball games. But the scheduling was inconsistent, and the job required a 90-minute commute on three subway lines from her home in Brooklyn’s Canarsie neighborhood.

She applied for data entry jobs that would allow her to work remotely, but never heard back. She remembered interviewing for a job at an Olive Garden restaurant and recognizing in the moment that she was flailing, her social skills diminished by the isolation of lockdown.

“The pandemic feels like it set my life back five steps,” she said.

For Desiree Obando, 35, losing her job at a restaurant in Manhattan’s West Village early in the pandemic nudged her to leave the hospitality industry after 12 years. When the restaurant group she used to work for asked her to come back a few months later, she had already enrolled at LaGuardia Community College, returning to school after dropping out twice before, with the goal of becoming a high school counselor.

She is now working a part-time job at an education nonprofit that pays $20 an hour, less than her hospitality job. But the work is close to her home in East Harlem, giving her the flexibility to pick up her daughter whenever the school has virus exposures.

Ms. Obando is hopeful that she will eventually get an income boost after she completes her master’s degree.

“There’s nothing like the pandemic to put things in perspective,” Ms. Obando said. “I made the right choice for me and my family.