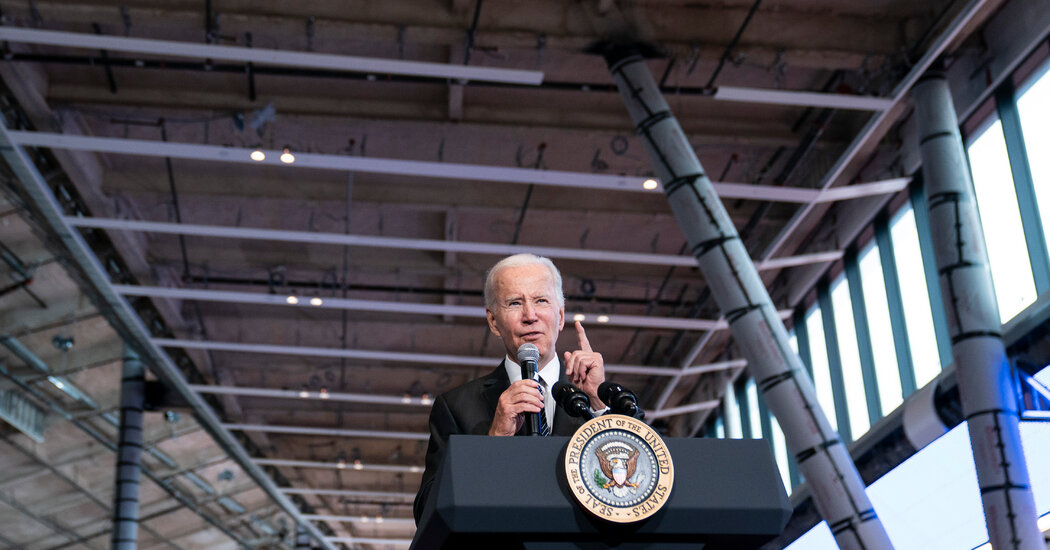 WASHINGTON — President Biden gathered with top Democrats at the White House on Tuesday to celebrate their inflation fight at an inopportune moment, as a sobering new report showed just how far the economy still has to go to bring soaring consumer prices under control.

The Consumer Price Index report for August contained a large dose of unwelcome news for the president, who has sought to defuse Republican attacks over rising prices in the run-up to November’s midterm elections. It showed that inflation had not cooled as White House economists and other forecasters had hoped, and that workers had lost buying power over the last year as prices increased faster than wages.

Another report, from the Census Bureau, showed that the typical American household saw its inflation-adjusted income fall slightly in 2021 from 2020. Perhaps more troubling for a president who has promised to close the gap between the very wealthy and the middle class, it showed that income inequality increased last year for the first time in a decade.

Those developments challenged Mr. Biden’s renewed efforts to reframe the economy as a winning issue for him and his party before the midterms — though the president seemed unfazed.

Mr. Biden welcomed thousands of supporters to the White House lawn to toast a new law that he says will help reduce the cost of electricity, prescription drugs and other staples of American life.

The event was essentially a rally for the so-called Inflation Reduction Act, which raised taxes on large corporations, targeted nearly $400 billion in spending and tax incentives to reduce the fossil fuel emissions driving climate change, and took steps to reduce prescription drug costs for seniors on Medicare and premium costs for Americans who buy health insurance through the Affordable Care Act.

Mr. Biden called the law “the single most important legislation passed in the Congress to combat inflation and one of the most significant laws in our nation’s history.”

“There’s an extraordinary story being written in America today by this administration,” Mr. Biden said, adding, “This bill cut costs for families, helped reduce inflation at the kitchen table.”

On Wednesday, Mr. Biden will head to the Detroit auto show, where he will champion his policies to bolster manufacturing and low-emission sources of energy.

But the country’s economic reality remains more muddled than Mr. Biden’s rosy message, as the inflation report underscored. Food prices are continuing to spike, straining lower-income families in particular. The global economy is slowing sharply, and threats remain to the American recovery if European sanctions force millions of barrels of Russian oil off the global market in the months to come.

With the primaries winding down, both parties are starting to shift their focus to the general election on Nov. 8.

A possible railroad strike could disrupt domestic supply chains. The White House press secretary, Karine Jean-Pierre, told reporters on Tuesday that the president had called union and company leaders on Monday in an attempt to broker an agreement to avert the strike.

Most important — and perhaps most damaging for Mr. Biden and Democrats — Americans’ wages have struggled to keep pace with fast-rising prices, an uncomfortable truth for a president who promised to make real wage gains a centerpiece of his economic program. Inflation-adjusted average hourly earnings ticked up across the economy in August, the Labor Department said on Tuesday, but they remain down nearly 3 percent from a year ago.

Republicans were quick to criticize Mr. Biden after the report on Tuesday. “Every day, Americans endure Biden’s economic crisis,” said Representative Blaine Luetkemeyer of Missouri, the top Republican on the Small Business Committee. “The Democrats’ inflation continues to drive up costs and leads more and more small businesses and families questioning their future.”

How Times reporters cover politics. We rely on our journalists to be independent observers. So while Times staff members may vote, they are not allowed to endorse or campaign for candidates or political causes. This includes participating in marches or rallies in support of a movement or giving money to, or raising money for, any political candidate or election cause.

Mr. Biden and his aides have celebrated falling gasoline prices on a daily basis throughout the summer. Those decreasing prices have helped inflation moderate from its high point this year, though not enough to offset rising rent, food and other costs last month.

Even as he acknowledges the pain of rapid price increases across the economy, Mr. Biden has claimed progress in the fight against inflation, including with the signing last month of the energy, health care and tax bill that Democrats called the Inflation Reduction Act. On Tuesday morning, he sought to put a positive shine on the August data, saying in a statement issued by the White House that it was a sign of “more progress” in bringing down inflation.

At his celebration on Tuesday afternoon, Mr. Biden barely mentioned the word “inflation.” Instead, he talked about reducing medical and energy costs — and, to a much larger extent, about the law’s efforts to combat climate change.

Near the end of the speech, he gave a strident defense of his administration’s economic record, including strong job creation, record small-business formation and a rebound of the manufacturing sector.

“And guess what?” Mr. Biden said. “For all the criticism I got and the help you gave me for gas prices bringing — they’re down more than $1.30 a gallon since the start of the summer. We’re making progress. We’re getting other prices down as well. We have more to do. But we’re getting there.”

Recent weeks have brought signs of hope for administration officials, among both consumers and companies. The National Federation of Independent Business reported on Tuesday that its Small Business Optimism Index rose in August as inflation anxiety eased, continuing a rebound from its depths this year. The Federal Reserve Bank of New York reported on Monday that consumer inflation expectations were also falling.

“What is most notable about where we are right now is the resilience of the labor market recovery, the resilience of American consumers and households, and that we are beginning to see some signs that prices may be moderating,” Brian Deese, the director of Mr. Biden’s National Economic Council, said in an interview this week.

“There’s more work to do,” Mr. Deese said. “But I think that is a signal that the economic decisions that this president has made are bearing fruit.”

But polls continue to show that inflation is hurting Mr. Biden and his party at a pivotal moment, as Democrats seek to retain control of the House and the Senate. High prices loom as the top issue for voters in national opinion polls, and Americans say they trust Republicans more to handle inflation and the economy overall than Democrats.

On Tuesday, stock markets recorded their largest daily loss in two years, driven by investor fears of stubborn inflation pushing the Federal Reserve to raise interest rates higher and faster than many expected.

Economists on Wall Street and in policy circles are debating whether the U.S. economy can achieve a so-called soft landing, with economic and job growth slowing in order to bring inflation down — but not slowing so much as to push millions of Americans out of work. Some, like the former Treasury Secretary Lawrence H. Summers, have warned that the unemployment rate will need to rise significantly to bring price growth down to historical levels.

Mark Zandi, the chief economist at Moody’s Analytics, whose analyses of Mr. Biden’s policy proposals are often promoted by the White House, said on Twitter on Tuesday that “job and wage growth must sharply slow” to reduce price increases in the service sector. “This is on the Fed, which must hike rates to get job and wage growth down without pushing the economy under.”

Tuesday’s inflation report, he added, “suggests that while still doable, it won’t be easy.”