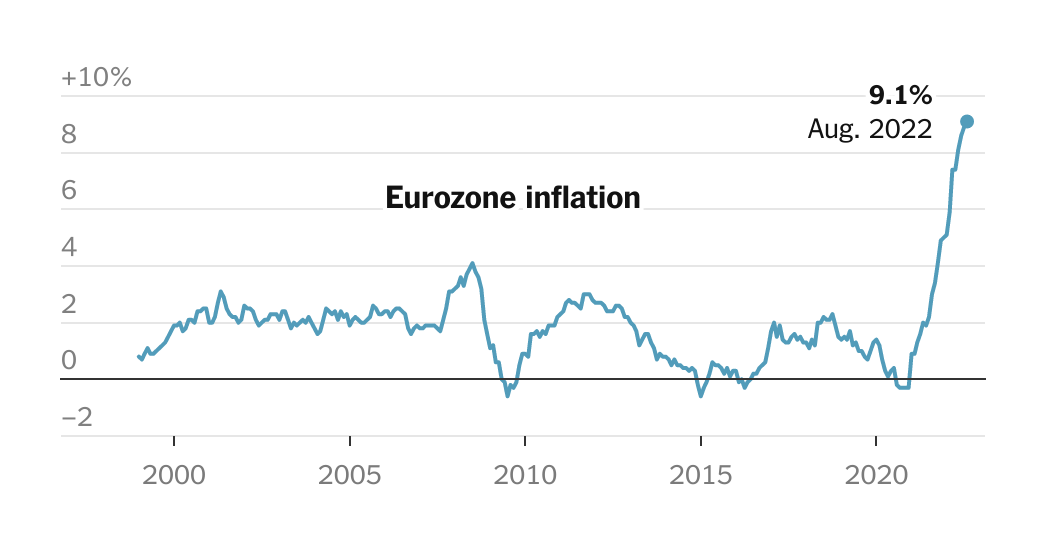 Inflation Tightens Its Grip on Europe

At the Saku beer factory in Estonia, the mammoth copper brew kettles sit side by side like household sink plungers stored on a shelf in a manor house for giants. The brewery has been around for 200 years, but this is the first time in memory that the company has planned two price rises — of 10 percent each — in a single year.

And even that double-barreled increase won’t be enough to cover the brewery’s skyrocketing costs, said Jaan Harms, a board member at Saku.

“We are in an environment of increasing inflation, and, of course, energy is by far the main driver,” Mr. Harms said. When its energy contracts run out at the end of the summer, the company’s gas costs will rise 400 percent and the electricity bills will double, he said. And because the providers of every product and service they buy are also dealing with soaring fuel prices, those costs are rising as well.

The squeeze in Estonia, where inflation in August topped 25 percent, is particularly acute. But the steady upward march of prices can be felt throughout Europe, according to estimates released Wednesday by the European Commission’s statistical office.

In the 19 countries that use the euro as currency, consumer prices rose 9.1 percent, up from the previous record, 8.9 percent, set in July. A year earlier, the rate was just 3 percent — a level that at the time set off alarms for reaching a decade-long high, but that would now be greeted with relief.

Nine countries in the eurozone registered double-digit inflation. Lithuania’s and Latvia’s rates were over 20 percent. France was among the few countries where the price index dipped, to 6.5 percent, the lowest in the group.

Inflation was driven mainly by energy prices, which rose at an annual rate of 38.3 percent, largely because of the invasion of Ukraine by Russia, which previously supplied most of Europe’s natural gas.

The report, released a week before the European Central Bank is scheduled to meet, is likely to reinforce the view that interest rates need to be raised again to curb inflation, despite the risk of recession.

Speaking at an economic summit near Jackson, Wyo., over the weekend, Isabel Schnabel, a member of the bank’s executive board, warned that inflation was more persistent than expected and said the bank needed to act “forcefully.”

“Inflation volatility has surged beyond the levels seen during the 1970s,” Ms. Schnabel said, a result of the coronavirus pandemic, the war in Ukraine and climate change that is causing widespread drought, wildfires and other extreme weather.

The pinch extends beyond the continent. Last week, Britain’s energy regulator announced that household gas and electricity bills would nearly double in October, making it difficult for millions of people to heat their homes this winter.

In the United States, one of the world’s largest energy producers, inflation hit 8.5 percent in July, still high but a decline from the 9.1 percent registered in June as prices for gas, airfares, used cars and hotel rooms fell.

In Afurada, a fishing village south of the Douro River in Porto, Portugal, food and fuel prices have been climbing. On a recent morning, Manuel Tavares returned from a night of fishing with a haul of nearly 200 pounds. He is spending 20 to 30 euros ($20 to $30) more a week for the gasoline that powers his small fishing boat.

The prices his catch fetches at the daily auction, though, have risen even more. Mr. Tavares, who has been fishing these waters for 42 years, said the species he brought in were particularly valued by restaurants that cater to tourists. Sea bream that used to sell for €8 a kilo is now selling for €12; sea bass commands €14 or €15 a kilo compared with €12.50 previously. Lamprey is even more valuable.

“The fish are paying for the fuel,” he said through a translator.

Sardines, which are celebrated with a monthlong festival in Portugal, have not gone up as much. Mr. Tavares said sardine fisherman, who also operate under restrictions to protect against overfishing, were struggling.

In Portugal, the annual rate of inflation in August was 9.4 percent. Earlier in the summer, Portugal and Spain brokered an agreement with the European Union to temporarily cap electricity prices at €40 per megawatt-hour. Professors at the Instituto Superior de Engenharia in Lisbon and at Complutense University in Madrid calculated that prices were 15 to 18 percent lower than they would have been without the cap.

Elsewhere in Europe, prices for electricity in August set eye-popping records, according to Rystad Energy, a consultancy in Norway, with an average price of €547 per megawatt-hour.

Spiraling costs are prompting households and businesses to look for savings. In Estonia, Saku Brewery stopped buying glass bottles from its Russian supplier after the outbreak of the war in Ukraine. Since then, wholesale bottle prices have shot up 20 to 80 percent.

So the company had to quickly change its sales and marketing plans. It stopped selling certain products, and halted all promotion for its biggest summer brand, Saku on Ice, Mr. Harms said, “simply because there are no bottles.”

Other bottled products will instead be sold in cans.

To save money on electricity, Saku installed solar panels atop its warehouses and brewery this summer, and it now boasts the country’s largest industrial rooftop solar park. In addition, the thermostats in offices will be lowered by 2 degrees this winter.

The energy crisis has also spurred the brewery to reconsider a proposal it had shelved as too expensive: the construction of a water treatment plant. The energy savings previously were not large enough to justify the cost. “But we are now thinking of doing this because the rules of the game have changed so much,” Mr. Harms said.

Saku’s initial price increase has gone through, but so far, there has not been a drop in sales. Summer vacation is prime season, Mr. Harms said, and when the weather is warm in this northern European country, people spend and drink.

But like the rest of Europe, Estonia is preparing for a dark winter.