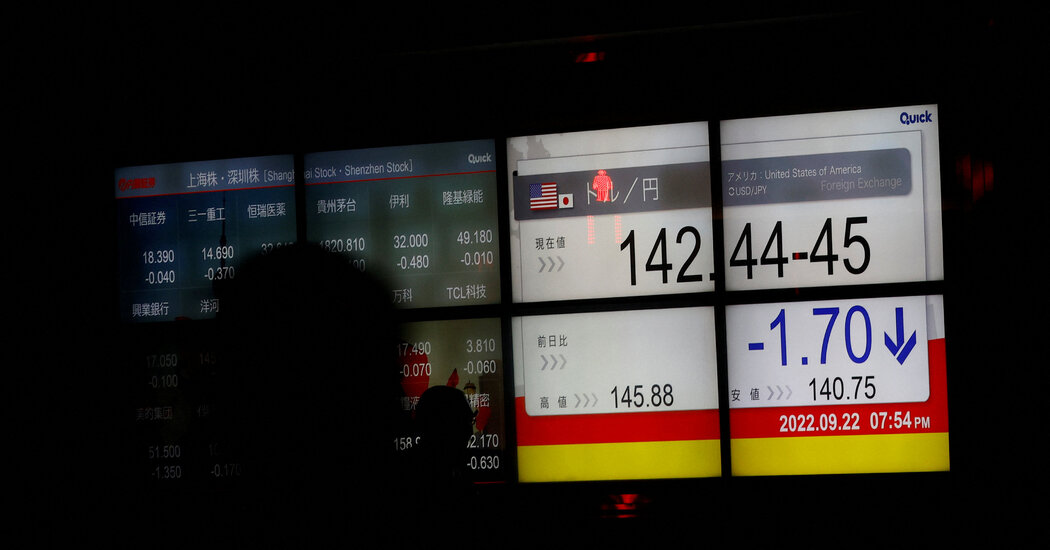 Japan Intervenes to Prop Up the Sliding Yen

Japan announced on Thursday that it had intervened to prop up the value of the yen for the first time in 24 years, seeking to stanch the currency’s continuing slide against the dollar.

The yen has lost over 20 percent of its value against the dollar over the past year pressuring Japan’s economy by making it more expensive to import many essentials including energy and food. The yen’s plunge has been caused largely by Japan’s determination to keep interest rates low even as the U.S. Federal Reserve cranks them up to fight inflation, pushing the dollar higher.

The Japanese yen passed 145 to the dollar on Thursday after the Fed’s announcement the previous day that it would raise its policy rate an additional three-quarters of a percentage point, to a range of 3 to 3.25 percent.

Speaking at a news briefing on Thursday, the Japanese finance minister, Shunichi Suzuki, said that the government had “been concerned about the rapid one-way movement” of the currency, adding thatit “absolutely can’t overlook excess volatility arising from speculative behavior.”

Japan has in recent months been warning that it could intervene if necessary, hoping that alone would stem the yen’s decline.

In an earlier era, a weak yen was widely seen as a boon for Japan’s export-driven economy, making its products cheaper and more attractive for consumers abroad and driving up the value of its foreign earnings.

As the economy globalized, however, and many manufacturers moved production off shore, the benefits have become less straightforward. The yen’s weakening has been especially problematic because the pandemic and the war in Ukraine have driven up the cost of a wide range of imports.

That has caused consternation at home, where prices have begun posting significant rises for the first time in years, as long as three decades for some products.

The Japanese government’s intervention Thursday followed an announcement by the Bank of Japan that it would stick fast to its longstanding ultralow interest rate policy even as most other countries have begun to follow the Federal Reserve’s increases.

Low interest rates have been a crucial part of Japan’s economic policy for almost a decade, introduced in an effort to push up the country’s low inflation by making money cheaper and more readily available. In small quantities, inflation is supposed to have salubrious effect on economic growth by increasing corporate profits and workers’ wages.

While inflation in Japan has gone up during the pandemic, it still remains well below the levels seen in other countries — 2.8 percent in August. And officials at the Bank of Japan believe that it is the wrong kind of inflation, created by pandemic-related supply constraints instead of the consumer-driven demand that low interest rates were intended to stoke.

Following the government’s dollar-selling operation on Thursday, the yen briefly jumped to just below 141 before dropping again.

Mr. Suzuki said that the government would not disclose details of the size or timing of the intervention.

Japan previously intervened to strengthen the yen during the Asian financial crisis in 1998 when the currency was trading at around 146 to the dollar. It tried to weaken the currency in 2011.