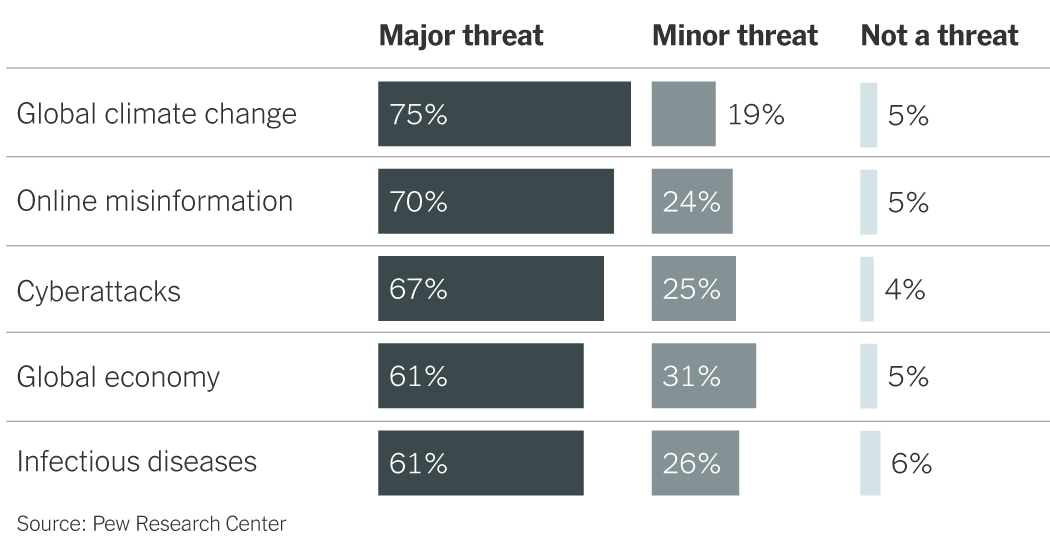 Nearly three-quarters of people across 19 countries believe that the spread of false information online is a “major threat,” according to a survey released on Wednesday by the Pew Research Center.

Researchers asked 24,525 people from 19 countries with advanced economies to rate the severity of threats from climate change, infectious diseases, online misinformation, cyberattacks from other countries and the condition of the global economy. Climate change was the highest-rated concern for most countries, with a median of 75 percent of respondents saying it is a major threat. Misinformation trailed closely behind, with a median of 70 percent deeming it a major threat.

The findings add to research that Pew released this year focusing on the United States. That survey showed misinformation virtually tied with cyberhacking as the top concern for Americans, with about seven in 10 people saying each is a major threat. In a sharp contrast with the other countries surveyed, the United States rated climate change the lowest threat among the available options.

Most Americans are concerned about misinformation …

After several bruising years of misinformation about elections and the coronavirus pandemic, 70 percent of Americans now believe that false information spread online is a major threat. Another 26 percent believe it is a minor threat, and just 2 percent say it is not a threat.

… but there are differences across the political spectrum.

Among Americans who voted for former President Donald J. Trump in 2020, 66 percent said online misinformation was a major threat, compared with 78 percent among voters who backed President Biden.

Researchers have previously warned that people with less education and those in more vulnerable positions (because of, for instance, low income or poor health) were more likely to believe in, and share, false information.

“We know that older people are more concerned about cyberattacks and the spread of false information online,” Mr. Poushter said. “That could mean that it’s a lot about technology.”