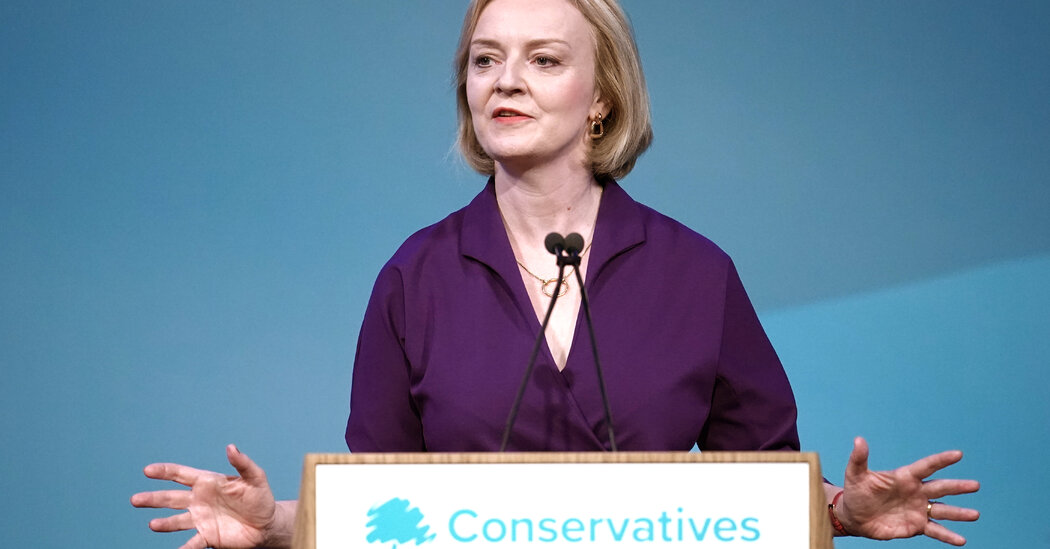 If financial markets are sending a message to Britain’s new prime minister, Liz Truss, it’s one of concern.

Ms. Truss, who was named on Monday as the choice of Conservative Party members to be the next prime minister, faces huge economic challenges as energy prices soar and the cost of living becomes increasingly unaffordable. With the outlook darkening and a recession becoming more likely, the pound is at its lowest level against the dollar since March 2020, and is approaching the lowest since 1985.

Elsewhere in Europe, markets started the week on shaky footing after the Russian energy giant Gazprom said on Friday that it would not restart the flow of natural gas between Russia and Germany through the Nord Stream 1 pipeline on Saturday as expected. Natural gas prices jumped, and stocks slumped.

Last month, the British pound dropped 4.5 percent against the U.S. dollar, its worst month in nearly six years as the economic outlook deteriorated. Households were told to expect their energy bills to rise by 80 percent in October, and industry groups warned that there could be large-scale business closings from companies that cannot afford energy bills. The Bank of England raised interest rates by the most in 27 years, and traders bet that rates would need to rise much higher to tackle inflation, which has reached 10.1 percent, even as forecasts for a recession are becoming more commonplace.

On Monday, as Ms. Truss was announced as the new prime minister in a widely expected result, the pound was little changed at about $1.15. It has been steadily sliding for over a year (since hitting $1.42 in June 2021) and is less than 1 percent away from being at its lowest level since 1985. Yields on Britain’s government debt, a measure of borrowing costs, have jumped higher, too. The yield on 10-year bonds approached 3 percent, the highest since early 2014.

The decision not to restart Russian gas flows through Nord Stream 1 has increased concerns about Europe’s energy supply for the winter and how much usage might need to be restricted to avoid blackouts.

Benchmark Dutch natural gas futures rose as much as 35 percent on Monday morning, and by late morning were 24 percent higher.

The euro was 0.3 percent weaker against the dollar on Monday, falling to 99 U.S. cents on Monday. It fell below parity for the first time in two decades in mid-July and has remained around that level. The shared currency has fallen nearly 13 percent this year against the dollar as an energy crisis brewed and the dollar strengthened with the Federal Reserve sharply raising interest rates in the United States.

Stock markets were closed in the United States for the Labor Day holiday.