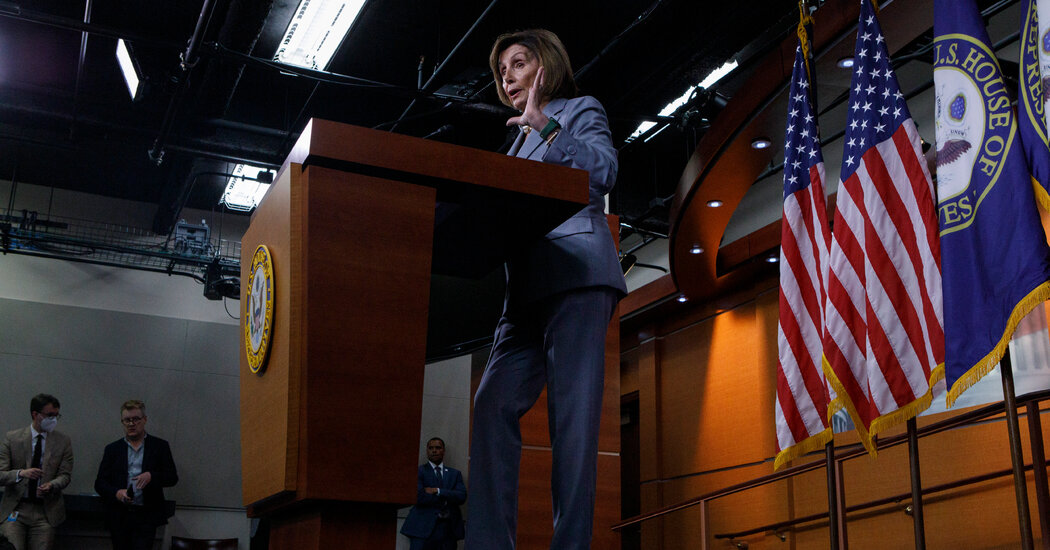 Speaker Nancy Pelosi said on Wednesday that Democrats would bring legislation to the House floor this month that would place new restrictions on the ability of lawmakers to buy and sell stocks.

Her announcement came after months of negotiations over whether and how to restrict personal financial activity by members of Congress that could create real or perceived conflicts of interest with their public duties. And it came a day after The New York Times published an analysis showing that between 2019 and 2021, 97 representatives and senators or their immediate family members had reported trades of stocks, bonds, or other financial assets that could have been influenced by committees they were serving on.

Ms. Pelosi declined to provide details of the legislative proposal other than to call it “very strong.”

“We believe we have a product that we can bring to the floor this month,” said Ms. Pelosi during her weekly news conference at the Capitol.

In the seven months since Ms. Pelosi first signaled her support for legislation to stiffen the curbs on congressional stock trading, there have been few signs of progress on legislation that could pass the House. A number of somewhat different bills have been proposed in both the House and the Senate, some with bipartisan support.

Our Coverage of the Investment World

The decline of the stock and bond markets this year has been painful, and it remains difficult to predict what is in store for the future.

“For months, House and Senate leadership have promised action,” Representative Abigail Spanberger, Democrat of Virginia and a lead sponsor of one bipartisan proposal to rein in trading by lawmakers, said. “It’s long past time to move forward.”

A version of a legislative framework in the House, outlined in a late August memo that was reviewed by The Times, would effectively prohibit lawmakers, their spouses and dependent children from making trades in individual stocks, bonds, cryptocurrencies and other financial assets tied to specific companies.

Under the framework, which is the basis for the current negotiations over a legislative proposal, members of Congress would either have to divest those assets or move them into a blind trust in which they would have no visibility or involvement. Lawmakers would continue to be permitted to invest in mutual funds, exchange-traded funds and some other categories.

According to the memo, the new legislation would also mandate more detailed transaction disclosures for the permitted investments — for instance, by narrowing the value ranges of assets that are published — and strengthen penalties for those who skirt or break the law.

“Congress can give these penalties teeth, which will promote compliance and provide tougher consequences for violations,” the memo states.

According to the memo, members of the Supreme Court would be subject to the same restrictions. So would senior congressional staff members, according to a Democratic official in the House.

Congressional leaders have faced increasing pressure in recent months to crack down on their colleagues’ financial activities. A running investigation by the website Insider that began last year has turned up 72 examples of lawmakers who have fallen out of compliance with current laws by filing transaction reports late, inaccurately, or not at all.

A poll conducted early this year showed that nearly two-thirds of respondents supported an all-out ban on members of Congress trading individual stocks. And with public trust in Congress at as low as 7 percent in June, many lawmakers are loath to ignore constituents’ demands.

“Congress is mired in a crisis of institutional legitimacy, brought about in part by reports of members of both parties appearing to profit off their positions of public trust,” Noah Bookbinder, president of the nonprofit group Citizens for Responsibility and Ethics in Washington, wrote in a letter on Wednesday that called for comprehensive limits on trading by members of Congress.

In a separate news conference on Tuesday, other senior House Democrats signaled confidence that progress on new trading curbs was being made.

Representative Hakeem Jeffries of New York, chairman of the House Democratic caucus, said he expected to see legislation “sometime soon” from Representative Zoe Lofgren, the California Democrat whom Ms. Pelosi has tasked with developing a bill that can achieve widespread support.

It is not clear whether the Senate might take up any legislation on the issue this year. A number of senators have been working on proposals but none appear yet to have secured the necessary 60 votes for Senate passage.

Senator Jeff Merkley of Oregon, who is working on one of the proposals, said on Wednesday, “I’m determined to get the ban on congressional stock trading across the finish line. I’ve been carrying this fight for a decade, and I will not let it die.”