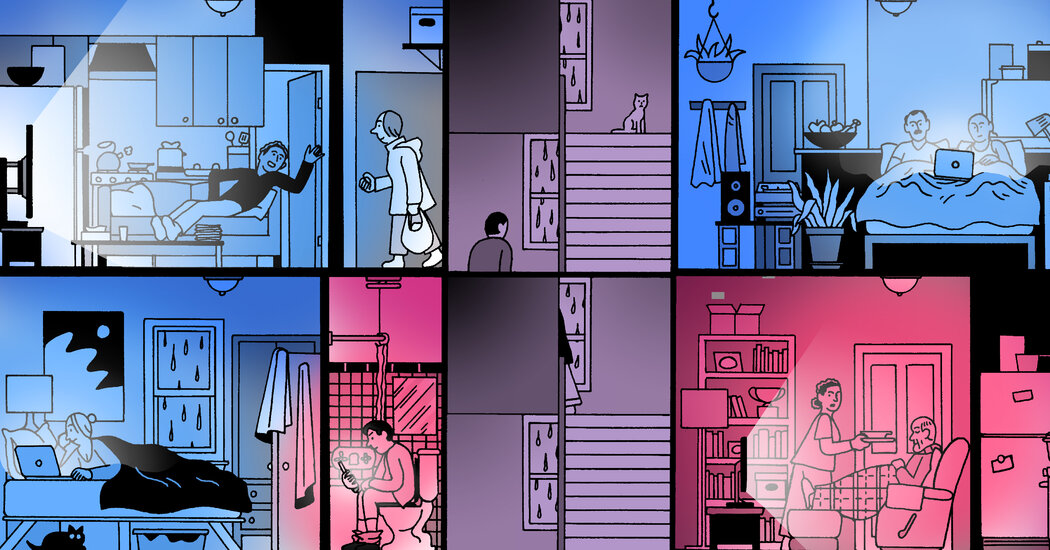 Over the last few weeks, tens of thousands of voters in the Detroit area who watch streaming video services were shown different local campaign ads pegged to their political leanings.

Digital consultants working for Representative Darrin Camilleri, a Democrat in the Michigan House who is running for State Senate, targeted 62,402 moderate, female — and likely pro-choice — voters with an ad promoting reproductive rights.

The campaign also ran a more general video ad for Mr. Camilleri, a former public-school teacher, directed at 77,836 Democrats and Independents who have voted in past midterm elections. Viewers in Mr. Camilleri’s target audience saw the messages while watching shows on Lifetime, Vice and other channels on ad-supported streaming services like Samsung TV Plus and LG Channels.

Although millions of American voters may not be aware of it, the powerful data-mining techniques that campaigns routinely use to tailor political ads to consumers on sites and apps are making the leap to streaming video. The targeting has become so precise that next door neighbors streaming the same true crime show on the same streaming service may now be shown different political ads — based on data about their voting record, party affiliation, age, gender, race or ethnicity, estimated home value, shopping habits or views on gun control.

Political consultants say the ability to tailor streaming video ads to small swaths of viewers could be crucial this November for candidates like Mr. Camilleri who are facing tight races. In 2016, Mr. Camilleri won his first state election by just several hundred votes.

“Very few voters wind up determining the outcomes of close elections,” said Ryan Irvin, the co-founder of Change Media Group, the agency behind Mr. Camilleri’s ad campaign. “Very early in an election cycle, we can pull from the voter database a list of those 10,000 voters, match them on various platforms and run streaming TV ads to just those 10,000 people.”

Targeted political ads on streaming platforms — video services delivered via internet-connected devices like TVs and tablets — seemed like a niche phenomenon during the 2020 presidential election. Two years later, streaming has become the most highly viewed TV medium in the United States, according to Nielsen.

Savvy candidates and advocacy groups are flooding streaming services with ads in an effort to reach cord-cutters and “cord nevers,” people who have never watched traditional cable or broadcast TV.

The trend is growing so fast that political ads on streaming services are expected to generate $1.44 billion — or about 15 percent — of the projected $9.7 billion on ad spending for the 2022 election cycle, according to a report from AdImpact, an ad tracking company. That would for the first time put streaming on par with political ad spending on Facebook and Google.

With the primaries over, both parties are shifting their focus to the general election on Nov. 8.

The quick proliferation of the streaming political messages has prompted some lawmakers and researchers to warn that the ads are outstripping federal regulation and oversight.

For example, while political ads running on broadcast and cable TV must disclose their sponsors, federal rules on political ad transparency do not specifically address streaming video services. Unlike broadcast TV stations, streaming platforms are also not required to maintain public files about the political ads they sold.

The result, experts say, is an unregulated ecosystem in which streaming services take wildly different approaches to political ads.

“There are no rules over there, whereas, if you are a broadcaster or a cable operator, you definitely have rules you have to operate by,” said Steve Passwaiter, a vice president at Kantar Media, a company that tracks political advertising.

The boom in streaming ads underscores a significant shift in the way that candidates, party committees and issue groups may target voters. For decades, political campaigns have blanketed local broadcast markets with candidate ads or tailored ads to the slant of cable news channels. With such bulk media buying, viewers watching the same show at the same time as their neighbors saw the same political messages.

“In the digital ad world, you’re buying the person, not the content,” said Mike Reilly, a partner at MVAR Media, a progressive political consultancy that creates ad campaigns for candidates and advocacy groups.

Roku, which maintains a public archive of some political ads running on its platform, declined to comment on its ad-targeting practices.

Samsung and LG, which has publicly promoted its voter-targeting services for political campaigns, did not respond to requests for comment. Netflix declined to comment about its plans for an ad-supported streaming service.

Political consulting firms can buy profiles on more than 200 millions voters, including details on an individual’s party affiliations, voting record, political leanings, education levels, income and consumer habits. Campaigns may employ that data to identify voters concerned about a specific issue — like guns or abortion — and hone video messages to them.

Some streaming services and ad tech firms allow political campaigns to provide lists of specific voters to whom they wish to show ads.

To serve those messages, ad tech firms employ precise delivery techniques — like using IP addresses to identify devices in a voter’s household. The device mapping allows political campaigns to aim ads at certain voters whether they are streaming on internet-connected TVs, tablets, laptops or smartphones.

Using IP addresses, “we can intercept voters across the nation,” Sten McGuire, an executive at a4 Advertising, said in a webinar in March announcing a partnership to sell political ads on LG channels. His company’s ad-targeting worked, Mr. McGuire added, “whether you are looking to reach new cord cutters or ‘cord nevers’ streaming their favorite content, targeting Spanish-speaking voters in swing states, reaching opinion elites and policy influencers or members of Congress and their staff.”

Some researchers caution that targeted video ads could spread some of the same voter-influence techniques that have proliferated on Facebook to a new, and even less regulated, medium.

Facebook and Google, the researchers note, instituted some restrictions on political ad targeting after Russian operatives used digital platforms to try to disrupt the 2016 presidential election. With such restrictions in place, political advertisers on Facebook, for instance, should no longer be able to target users interested in Malcolm X or Martin Luther King with paid messages urging them not to vote.

Facebook and Google have also created public databases that enable people to view political ads running on the platforms.

But many streaming services lack such targeting restrictions and transparency measures. The result, these experts say, is an opaque system of political influence that runs counter to basic democratic principles.

“This occupies a gray area that’s not getting as much scrutiny as ads running on social media,” said Becca Ricks, a senior researcher at the Mozilla Foundation who has studied the political ad policies of popular streaming services. “It creates an unfair playing field where you can precisely target, and change, your messaging based on the audience — and do all of this without some level of transparency.”

Some political ad buyers are shying away from more restricted online platforms in favor of more permissive streaming services.

“Among our clients, the percentage of budget going to social channels, and on Facebook and Google in particular, has been declining,” said Grace Briscoe, an executive overseeing candidate and political issue advertising at Basis Technologies, an ad tech firm. “The kinds of limitations and restrictions that those platforms have put on political ads has disinclined clients to invest as heavily there.”

Members of Congress have introduced a number of bills that would curb voter-targeting or require digital ads to adhere to the same rules as broadcast ads. But the measures have not yet been enacted.

Amid widespread covertness in the ad-targeting industry, Mr. Camilleri, the member of the Michigan House running for State Senate, was unusually forthcoming about how he was using streaming services to try to engage specific swaths of voters.

“It’s been working incredibly well because a lot of people will say, ‘Oh, I’ve seen you on TV,’” Mr. Camilleri said, noting that many of his constituents did not appear to understand the ads were shown specifically to them and not to a general broadcast TV audience. “They don’t differentiate” between TV and streaming, he added, “because you’re watching YouTube on your television now.”