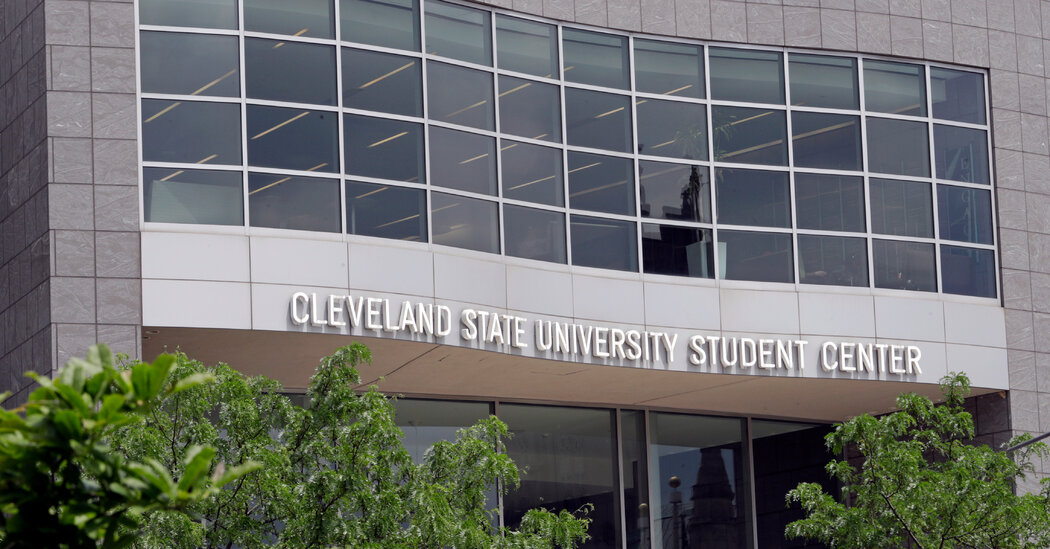 A federal judge said on Monday that it was unconstitutional for a university in Ohio to virtually scan the bedroom of a chemistry student before he took a remote test, a decision that could affect how schools use remote-monitoring software popularized during the Covid-19 pandemic.

The right to privacy of the student, Aaron M. Ogletree, outweighed the interests of Cleveland State University, ruled Judge J. Philip Calabrese of the U.S. District Court for the Northern District of Ohio. The judge ordered lawyers for Mr. Ogletree and the university to discuss potential remedies for the case.

The use of virtual software to remotely monitor test takers exploded during the first years of the coronavirus pandemic, when millions of students were suddenly required to take classes online to minimize the spread of the disease. Students and privacy experts have raised concerns about these programs, which can detect keystrokes and collect feeds from a computer’s camera and microphone.

Matthew D. Besser, a lawyer who represented Mr. Ogletree, said his client felt “vindicated” by the ruling. “Standing up for not only his own privacy but the privacy rights of public school students across the country was something that he felt extremely strongly about,” Mr. Besser said.

Cleveland State University, like many other schools, had offered online courses before the pandemic and published guidelines about how to manage these classes in 2016. The policies did not require or recommend the use of a room scan, but faculty members could decide whether or not to scan rooms for a test, the judge’s opinion said.

The university offered a mix of remote and in-person classes in the spring semester of 2021, but it did not allow Mr. Ogletree, now 25, to take classes in person because of “various health issues that impact his immune system” that put him at a higher risk in the pandemic, court papers said.

In January 2021, Mr. Ogletree took issue with a room-scan policy in his General Chemistry II class, which said that students taking a test remotely might be asked to show their work area before, during or after a test, court papers said. Mr. Ogletree disputed the policy and it was removed from the class syllabus three days later, court papers said.

The next month, two hours before a General Chemistry II test, the university’s testing service told Mr. Ogletree in an email that the proctor would be checking his work area before the exam. Mr. Ogletree replied that there were confidential documents, including 1099 forms, in the bedroom where he was taking his test and that he would not be able to secure them before the exam.

Mr. Ogletree still complied with the request for a scan, which lasted from between 10 and 20 seconds up to a minute, court papers said. He then sued the school, which he still attends, claiming it had violated his Fourth Amendment right to privacy.

Judge Calabrese agreed in his ruling. “Holding otherwise, as Defendant argues, raises even more difficult questions about what legal standard, if any, governs the scans and the potential consequences of such a ruling in other areas of life and the law that technology touches,” he wrote.

The judge ordered attorneys for Mr. Ogletree and the university to discuss potential remedies in the case and to provide an update in September.

The school’s legal representation, Dave Yost, who is Ohio’s attorney general, is reviewing the decision and consulting with the university on possible next steps, Bethany McCorkle, a spokeswoman, said in an email.

“Ensuring academic integrity is essential to our mission and will guide us as we move forward,” Dave Kielmeyer, an associate vice president at Cleveland State University, said in an email. “While this matter remains in active litigation, we are unable to comment further.”

Mr. Besser said that if the court decided to issue an injunction, or order, against the process, it would apply only to Cleveland State University but could serve as a warning or precedent to other public universities.

“The implications are too significant to ignore,” he said. “I think every public school across the country needs to take note of this decision and start looking at either eliminating these virtual searches of student houses, or put in place some safeguards.”

Mr. Besser said protecting test integrity was a legitimate interest, but he hopes that this case pushes schools to do it in a way that is not intrusive to students’ security.

Students who don’t want to show their home environments on camera can’t be expected to find a different place to take tests, Mr. Besser said. Health issues or family responsibilities such as child care could prevent a student from having the option of testing elsewhere.

Evan Greer, director of Fight for the Future, a nonprofit organization that advocates stronger protections of people’s digital rights, likens these platforms to spyware.

“There’s been an explosion of this kind of school-mandated surveillance since the pandemic and with the advent of remote learning,” she said. “So it’s something that we’re very much trying to draw a line in the sand about.”

Some of the proctoring software allows a person monitoring an exam to take control of students’ devices, which poses privacy concerns in addition to the room scans, Bill Fitzgerald, a privacy researcher, said.

Lucy Satheesan, 19, was uncomfortable showing her bedroom, where she had medications, to a stranger while she was a computer science student at Miami University in Oxford, Ohio. Her experience, and those of her peers, led her to become involved in researching exam surveillance security and algorithms.

“It’s an intrusion into mine and other people’s personal spaces,” she said.