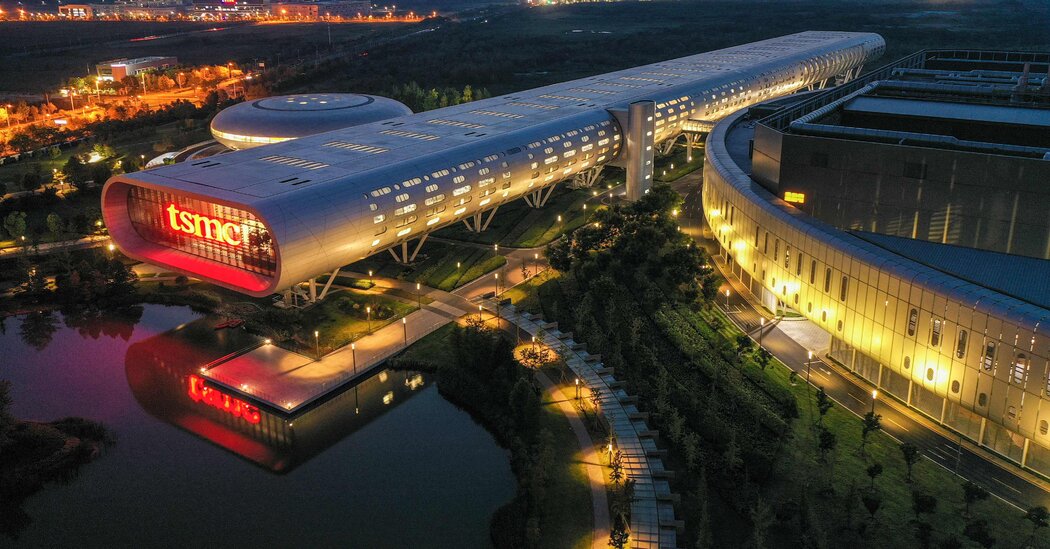 Taiwan Is Caught in a Great Game Over Microchips

TAIPEI, Taiwan — As Chinese warships rehearsed a blockade of Taiwan this month, they simulated a scenario global leaders and policymakers have been busy worrying about: not war, but a grinding halt to the electronic supply chains that make the modern world run.

Taiwan’s biggest trading partners — which include China, the United States, Europe and Japan — have different ideas about the self-ruled island’s political future, yet all share common ground in one desire, to expand their piece of its cutting-edge semiconductor industry.

The calculation begins from a basic, and unsettling, reality of the global economy. Taiwan is the biggest producer of the world’s most advanced chips. It is also rapidly becoming one of the world’s most dangerous geopolitical flash points. The fear is that in the event of a conflict, firms won’t get the microchips they need to make phones and drones, set up supercomputers and cellular networks, and even build new weapons.

Tech companies on both sides of the Pacific now rely heavily on TSMC to craft the high-performance chips that render graphics in video games and give smartphones their smarts, but that also guide missiles and analyze oceans of military data. That has turned TSMC, whose name is obscure to most consumers, into a vital strategic asset for both Washington and Beijing.

During the geopolitical drama of the past month, the power of TSMC and the rest of the island’s chip supply chain has been clear. On Ms. Pelosi’s trip to Taiwan, she met with TSMC’s chief executive, Mark Liu, and its storied founder, 91-year-old Morris Chang. A separate delegation led by Senator Edward J. Markey, Democrat of Massachusetts, met with the company to discuss investments and improving semiconductor supply chains.

Taiwan’s president, Tsai Ing-wen, told one group that she saw the island’s tech prowess as a means of shoring up support for its democracy. Calling economic security a “pillar” of national security, she said Taiwan was willing to work with partners to build sustainable supply chains for what she called “democracy chips.”

Chinese state media sniped at the efforts, calling Ms. Pelosi’s meeting a “photo op.” Still, in an indicator of how important Taiwan’s chips are, it did little to hit back at the company.

For all of her feting of American delegations, Ms. Tsai, and the semiconductor industry she seeks to protect, face a precarious balancing act. Many Taiwanese businesses — TSMC included — rely on China for their livelihoods, even if they support Ms. Tsai in standing up to Beijing’s pugilistic behavior.

Read More on the Relations Between Asia and the U.S.

Though many in the semiconductor industry would look to the United States for support in the event of a conflict with China, they balk at the impracticality of building new factories in the United States, which is costlier and lacks supporting industries. Mr. Chang, the TSMC founder, has repeatedly and publicly made the point.

TSMC, which declined to comment on its role in geopolitics, has maneuvered in the narrow space between American and Chinese interests. It is building new production facilities in Japan and in Arizona, even as it expanded the capacity of its factory in the eastern Chinese city of Nanjing. But, critically, the vast majority of its most advanced production happens in Taiwan, where TSMC continues to build its leading-edge production facilities, called fabs.

Seen one way, this web of dependencies helps keep the peace. China’s reliance on TSMC and other Taiwanese chip companies deters the Communist Party from invading the island. The United States’ dependence on the same know-how gives its military support for Taiwan additional credibility.

In the event of a military conflagration, Taiwan’s importance to global chip supplies also means the damage to all sides — and to the wider world’s digital infrastructure — is hugely amplified. Not for nothing do people in Taiwan call TSMC their “sacred mountain, protector of the nation.”

China’s new bellicosity, which crescendoed earlier this month with a week of missile tests and fighter incursions, has steadily pushed the island’s sympathies away from China.

“Right now, they’re moving very much toward the U.S.,” Dieter Ernst, a senior fellow at the Center for International Governance Innovation who studies the semiconductor industry, said of Taiwan’s leaders. “But from the perspective of the Taiwanese economy and most Taiwanese companies, they need to retain a link — and hopefully as close as possible a link — with China.”

Some top semiconductor leaders have spoken out against China after the military drills. Robert Tsao, the founder of Taiwan’s second-largest chip manufacturer, United Microelectronics, said he would donate $100 million to Taiwan’s military following the exercises. Long seen as friendly to China, Mr. Tsao said in an interview that things had changed.

“They will bring no progress, only destruction,” he said of China’s Communist Party. He also spoke out against the trend in recent years of Taiwanese semiconductor engineers going to work for Chinese companies for large salaries, saying they were “servicing the Chinese Communist Party.”

Yet few in Taiwan’s microchip industry believe Taiwan can walk away from China. The bulk of the electronics supply chain continues to run through China. For years, the value of China’s imports of semiconductors has exceeded those of oil. In 2021, it bought more than $430 billion in semiconductors, 36 percent of which came from Taiwan, according to Chinese state media. Much of it goes into devices made for foreign firms that are then exported to the world.

Despite China’s efforts to make more chips domestically — which have had some success, but have also recently been hit by a wave of executive arrests for corruption — Taiwan chip makers have taken pains not to become China’s “enemy,” said Ray Yang, consulting director at Taiwan’s government-funded Industrial Technology Research Institute.

“No one would look at TSMC and say ‘you are my enemy.’ I think for Taiwan’s industry, in fact, everyone still knows we are their friends, even China,” he said.

Yet TSMC, and Taiwan, have been increasingly aligned with American policy. The company’s cooperation was indispensable to the Trump administration’s efforts to hobble Huawei, the Chinese tech giant. TSMC was a major supplier for Huawei until new U.S. rules put an end to that.

TSMC will also receive American chip subsidies linked to pledges not to further expand in China under the recently passed CHIPS and Science Act of 2022. Taiwanese officials have been receptive to a new U.S.-proposed Chip 4 alliance, which seeks to unite the American chip supply chains with those of Taiwan, South Korea and Japan — at the exclusion of China.

Analysts debate how much protection China’s reliance on Taiwan gives it. Some argue that calculations over supply chains are insignificant in a decision over war, which could bring untold devastation and reshape geopolitics.

“You have to worry that those interdependencies look very significant, in peacetime, to the people who are embedded in those relationships,” said Richard J. Danzig, who served as Navy secretary under President Bill Clinton. “But when the momentum for war begins to develop, it tends to swamp those things.”

Nonetheless, few deny that Taiwan’s centrality in the supply chain makes such considerations a factor, a concept generally referred to as the “silicon shield.” An invasion of Taiwan would mean a form of mutually assured destruction, not necessarily of the world, but for the many modern gadgets we use every day.

That does confer a dose of security, said Jason Hsu, a former Taiwan legislator and current fellow at the Harvard Kennedy School focused on technology.

“TSMC is in the eye of the storm,” he said. “Sometimes what seems to be the most dangerous place can be the safest.”