Home / Blog / Tech / Text Messaging Is Cool. But Where Are Its Boundaries? 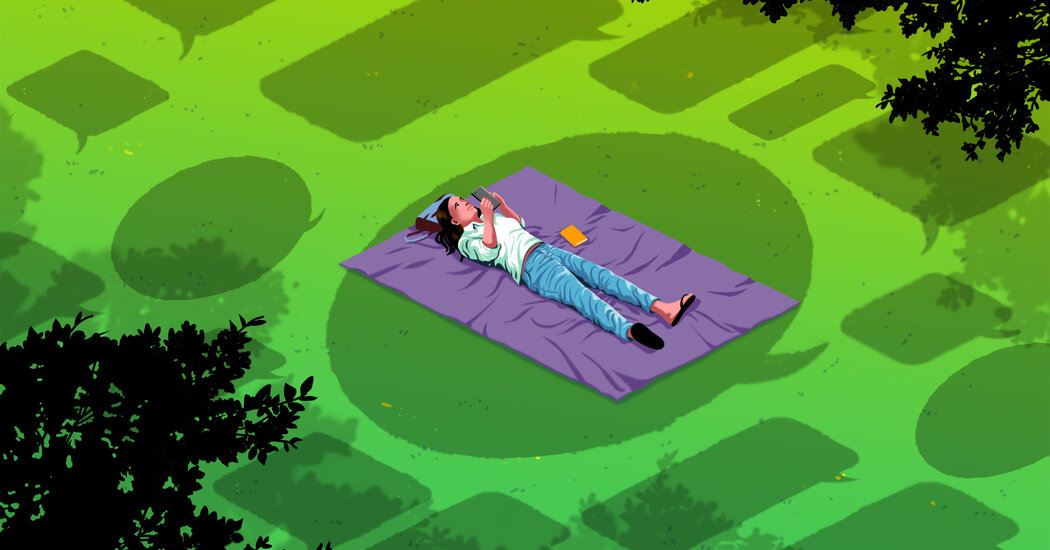 Text Messaging Is Cool. But Where Are Its Boundaries?

The text-messaging app has always been the most-used app on my phone. It’s fun and efficient, and it’s often a quicker way to get a response than sending an email or making a phone call.

Yet, even as Apple delivered a slew of new text-messaging features in a software update this week — and as Google has made improvements to its Android messenger app over the years, like adding colorful emojis — texting still leaves much to be desired.

Apple’s latest software system, iOS 16, which was released on Monday, includes enhancements to its iMessage app. Texts can now be edited after they are sent to scrub out embarrassing typos; a message can also be retracted. Google’s Messages app for Android has tools that automatically generate responses to texts.

These changes help us sidestep awkward situations and save time, but they don’t address a larger societal problem: Texting is distracting, demanding and, at least at times, stressful.

The pros of text messaging can easily turn into cons. Since texting typically takes only a few seconds and is widely considered the most urgent, attention-grabbing form of digital communication, it’s difficult to set boundaries around texting with our colleagues and friends. Texting invites us to intrude on other people’s time.

“Where does your work end, and where does your personal life begin?” said Justin Santamaria, one of the iPhone engineers who developed the iMessage app more than a decade ago. “That’s something over the past three years everybody has struggled with, and it’s playing out on your home screen.”

Texting is also not the most secure form of communication, especially in a post-Roe era when privacy is more important than ever, said Caitlin George, a managing director at Fight for the Future, a digital rights advocacy group.

“It should be something that everybody should have and not have to worry or think about,” she said of the need for a universal private texting service.

The new messaging features are simple to use. On iPhones running iOS 16, holding down on a sent message opens options to edit or retract it. Android users can open Google’s Messages app, enter the settings and toggle on “Enable chat features” to use the new texting technology, called Rich Communication Services.

We need an away message

To minimize the likelihood that we will be bombarded by texts, Apple and Google have added layers of settings to tell others when we are busy. Yet the tools are ineffective.

Apple’s iOS includes Focus, a tool released last year to manage how phone notifications appear in various aspects of our lives, including at work, at home, when we’re driving or heading to bed. In a work profile, for example, Focus can be set up to let text and phone notifications arrive only from colleagues; anyone not on the approved list gets a message that notifications aren’t being received.

My problem with Focus is that it’s overly complex. Setting up each Focus profile is time-consuming, and it requires effort to schedule a Focus to activate at certain times, or to remember to toggle the feature on or off. In my experience, even when my Focus setting tells people that I’m not receiving notifications, they text me anyway.

Mr. Santamaria, the former iPhone engineer, now runs Future, a messaging app for people to talk to fitness trainers. He said that he understood the intent behind Apple’s Focus but that he agreed it was too cumbersome to set up.

“I don’t want my friend on the East Coast to not send me some funny meme because I’m asleep if it’s not going to wake me up,” he said.

Yet every notification for a new text message adds to a to-do list to respond to someone. “This red dot grows,” he said.

Google’s messaging app has a so-called Smart Reply tool, which automatically generates possible responses to a text message, including one that says you are busy. But you still have to manually select a response.

Apple’s and Google’s text messaging apps would benefit from a much simpler tool: the away message.

America Online Instant Messenger, one of the earliest online messaging services, from the 1990s, had a simple autoresponder with a memo that users could use to tell people why they were unavailable. Slack, the chat app for workplace collaboration, has the ability to display an away status like “on vacation until Monday.” It’s effective at stopping people from sending a message.

We need a scheduling tool

One of the beauties of text messaging is the ability to share something — like an idea or a photo — immediately. But the iPhone messaging app still lacks an easy way to avoid pestering people at unreasonable hours: the ability to schedule a message to send later.

Here is where Android’s messaging app has a clear advantage. Last year, Google added a scheduling tool. After composing a message, hold down the send button. A “Schedule send” button appears, letting you set a time and date for the text to be sent. That’s useful because we often send texts at unreasonable hours for fear of forgetting to send it later, and a scheduling tool solves this problem.

We need Apple and Google to work together

The lack of interoperability between the iPhone and Android messaging services makes photos and videos look pixelated when sending them between Androids and iPhones, a dreaded digital phenomenon known as the “green bubble” effect.

At a tech conference last week, an audience member raised this issue with Tim Cook, Apple’s chief executive. In a question-and-answer session, Mr. Cook was asked whether Apple would consider making the iPhone’s messaging service work with Google’s Rich Communication Services so that the questioner could send clearer videos to his mother, who had an Android phone.

“I don’t hear our users asking that we put a lot of energy in on that at this point,” Mr. Cook said. “Buy your mom an iPhone.”

Ms. George of Fight for the Future said Mr. Cook’s comment was elitist because not everyone could afford an iPhone. The incompatibility between Apple’s and Google’s messaging apps also posed a problem to digital privacy, she said.

Apple and Google encrypt their messaging apps to make messages indecipherable to anyone but the sender and the recipient. But the encryption works only when Apple phones text Apple phones and Android phones text Android phones. When users of different mobile operating systems text each other, their messages lack encryption, making the content readable to other parties like phone carriers.

While third-party texting apps like Signal offer encrypted messaging between Apple and Android phones, those tools are not as widely used as the default texting apps that arrive on our phones.

A Google spokesman referred to a series of tweets by Hiroshi Lockheimer, the Google executive overseeing Android, stressing the need for Apple to support Rich Communication Services to strengthen privacy protection for Android and iPhone users.

The content of text messages has become even more sensitive after the reversal of Roe v. Wade, Ms. George said, now that law enforcement agencies can seek data from tech companies and phone carriers to prosecute women who seek abortions. This is one reason it would serve a greater good if Apple and Google found a way to work together on their messaging apps, she said.

“At a time when half the country needs to be concerned about how they’re communicating about their bodily autonomy, there’s a moral obligation to see your marketing through if you’re telling people they can trust you,” she said of Mr. Cook, who has staked his reputation on digital privacy.