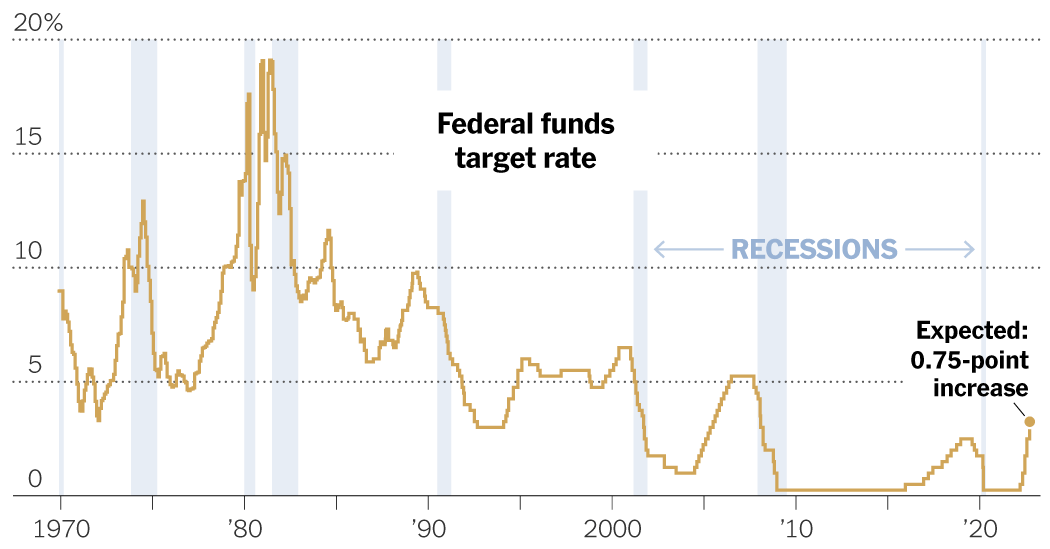 The Fed Is Set to Make a Third Interest Rate Increase: Live Updates and News

Federal Reserve officials are set to release both an interest rate decision and a fresh set of economic projections on Wednesday, and Wall Street is keenly awaiting those estimates as it tries to understand what the next phase of the central bank’s fight against rapid inflation will look like.

Officials are expected to raise borrowing costs by three quarters of a percentage point, their third straight jumbo-sized increase, taking their official interest rate to a range of 3 to 3.25 percent. But investors expect that the central bank could project an even higher rate by the end of the year — so they will also be parsing the Fed’s first set of economic projections since June for a sense of what comes next. Here’s how to read the numbers and which ones to watch when they are released at 2 p.m. on Wednesday.

When the central bank releases its Summary of Economic Projections each quarter, Fed watchers obsessively focus on one part in particular: The so-called dot plot.

The dot plot shows the Fed’s 19 policymakers’ estimates for interest rates at the end of 2022, along with the next several years and over the longer run. The forecasts are represented by dots arranged along a vertical scale.

Economists closely watch how the range of estimates is shifting, because it can give a hint at where policy is heading. Even so, they fixate most intently on the middle dot (currently the 10th). That middle, or median, official is regularly quoted as the clearest estimate of where the central bank sees policy heading.

The Fed is trying to wrestle down the fastest inflation in 40 years, and to do that, officials believe that they need to lift interest rates enough to slow spending, crimp business investment and expansion and cool off a hot job market. The central bank has been moving rates up quickly, and as inflation has remained stubbornly rapid, expectations for future increases have also climbed.

In June, the median official expected interest rates to close out the year between 3.25 and 3.5 percent. That will almost certainly rise with this set of projections — at this point, investors are betting that the rate will climb to a range of 4 to 4.25 percent by the end of the year.

Wall Street will also closely keep an eye on where and when rates might peak. In June, half of officials expected rates to peak between 3.75 and 4 percent or higher at the end of 2023. That number, too, could move higher.

The most important trick for reading the dot plot? Pay attention to where the numbers fall in relation to the longer-run median projection. That number is sometimes called the “natural” rate, and it most recently stood at 2.5 percent. It represents the theoretical dividing line between easy and restrictive monetary policy.

The bigger the gap between the expected Fed funds rate and the “natural” rate estimate, the more officials expect to clamp down on the economy as they try to wrangle price increases.

Unemployment projections will be key

Much of Wall Street is fixated on a critical question: Will the Fed accept a much-higher jobless rate in its bid to counter rapid inflation? Page two of the economic projections may hold some preliminary answers.

The Fed has two jobs. It is supposed to achieve maximum employment and stable inflation. Unemployment has been very low, employers are hiring voraciously and wages are shooting higher, so officials think that their full employment goal is more than satisfied. Inflation, on the other hand, is running at more than three times their official target.

Given that, the central bankers are now single-mindedly focused on bringing price gains back under control. But once the job market slows, joblessness begins to rise and wage growth moderates — a series of events officials think is necessary to get back to slow and steady price gains — the really difficult phase of the Fed’s maneuvering will begin. Central bankers will have to decide how much joblessness they are willing to tolerate, and may have to judge how to balance two goals that are in conflict.

Jerome H. Powell, the Fed chair, has already acknowledged that the adjustment process is likely to bring “pain” to businesses and households. The Fed’s updated unemployment rate projections will show how much he and his colleagues are prepared to tolerate.

The numbers to focus on are the median unemployment rate projections for 2023, 2024 and 2025. That’s because Fed policy takes time to work its way through the economy, so the maximum fallout will be felt over time.

“These are the unfortunate costs of reducing inflation,” Mr. Powell said late last month. “But a failure to restore price stability would mean far greater pain.”

The road toward higher unemployment is paved with slower growth. To force the job market to cool and inflation to moderate, Fed officials believe they have to drag economic growth below its potential level — and how much it is expected to drop can send a signal about how punishing the Fed thinks its policies will be.

Many experts think that the economy is capable of a certain level of growth in any given year, based on fundamental characteristics like the age of its population and productivity of its companies. Right now, the Fed estimates that longer-run sustainable level as about 1.8 percent, after adjusting for inflation.

Last year, the economy was growing much more strongly than that — it began overheating. Now, to bring inflation down, it needs to slow below that rate for some time, the logic goes. As of their latest projections, officials saw growth at 1.7 percent this year and next. If they show a bigger down-drift this time, it will be a signal that they think a more aggressive hit to the economy will be needed to wrestle inflation lower.

The inflation estimates in the Fed’s projections typically do not offer a lot of insight.

That’s because the Fed’s forecasts predict how the economy will shape up if central bankers set what they consider to be “appropriate” monetary policy. To qualify as “appropriate,” monetary policy by definition must push price increases back toward the Fed’s 2 percent annual average goal over the course of a few years. That means Fed inflation forecasts always converge back toward the central bank’s goal in economic estimates.

If there is a glimmer of utility here, it is how long the central bank sees it taking to wrestle prices back to its target level. In June, for instance, officials didn’t see it happening through 2024, signaling that the path toward more subdued inflation is likely to be a long one.