Home / Blog / Business / The Fed made another supersize rate increase as it struggles to contain rapid inflation. 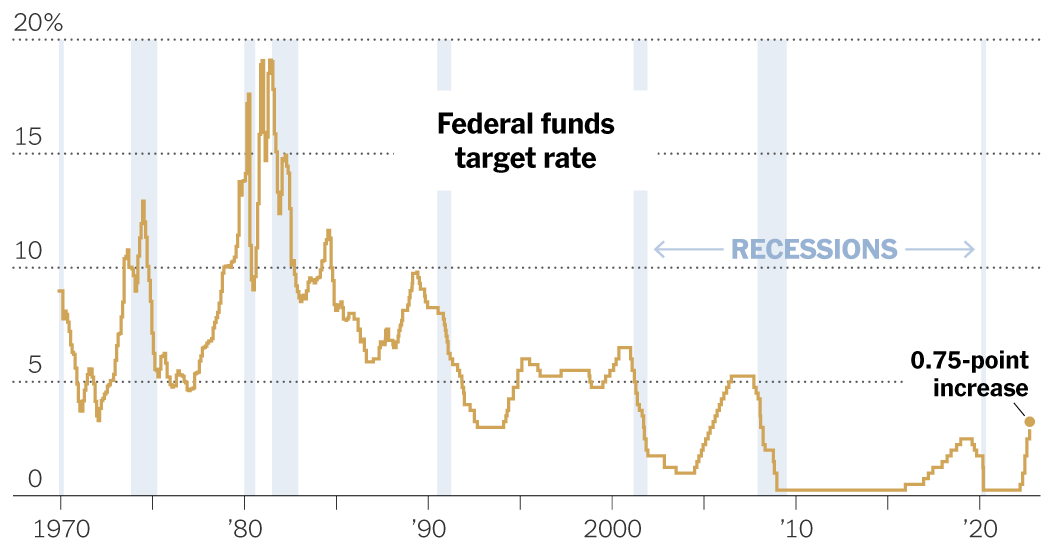 The Fed made another supersize rate increase as it struggles to contain rapid inflation.

Federal Reserve officials ramped up their battle against the fastest inflation in 40 years on Wednesday, ushering in a third straight supersize rate increase while projecting a more aggressive path ahead for monetary policy, one that would lift interest rates higher and keep them elevated longer.

Central bankers raised their policy interest rate by three-quarters of a percentage point, boosting it to a range of 3 to 3.25 percent. The federal funds rate was set at near zero as recently as March, and the Fed’s increases since then have made for its fastest policy adjustment since the 1980s.

Even more notably, policymakers predicted on Wednesday that they will raise borrowing costs to 4.4 percent by the end of the year — suggesting that they could make another supersize rate move, followed by a half-point adjustment. Officials estimated that rates will climb to 4.6 percent by the end of 2023, up from an estimate of 3.8 percent in June, when they last published estimates.

Fed officials expect to begin lowering rates in 2024, but anticipate bringing them down only slowly.

The policy path that the Fed laid out on Wednesday was far more severe than the one officials had previously predicted. It shows the central bank pushing rates far past the point where they are weighing on economic growth and leaving them elevated for years to come.

Together, the Fed’s September rate decision and stark projections amounted to a declaration: The central bank is determined to crush inflation, even if doing so comes at a cost to the economy in the near term.

Prices continue to increase at more than three times the rate central bankers target, making everyday life hard to afford for millions of Americans. While the jump in inflation has been global and comes partly because the pandemic and war have roiled supply lines, companies are able to charge so much partly because consumer demand has remained resilient. Officials are trying to change that.

The Fed’s policies work by constraining demand. Higher interest rates make it more expensive to borrow money to buy a car or house or expand a business, slowing consumer spending and corporate expansions. As the economy cools and hiring and wage growth slacken, companies should struggle to charge their customers as much, paving the way for more moderate price increases.

But the path toward weaker inflation is likely to be painful. The Fed’s actions are intended to weigh on the economy, and officials expect that they will even push unemployment higher. Officials projected that joblessness will rise to 4.4 percent next year — considerably higher than 3.7 percent now — and stay there through 2024. Economic growth, policymakers expect, will be slower.