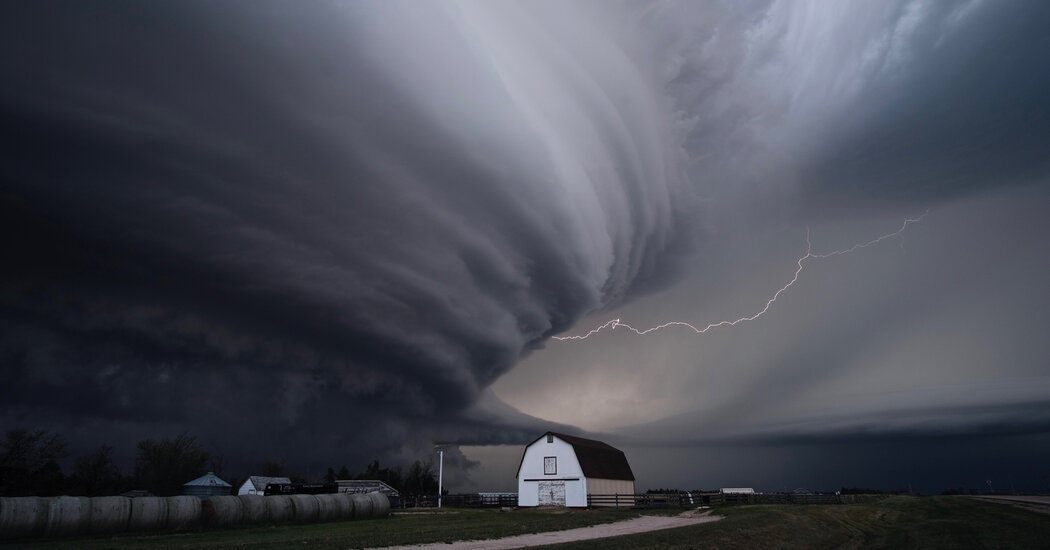 The Hunt for Big Hail

In August, a couple of days before his 68th birthday, Leslie Scott, a cattle rancher in Vivian, S.D., went to the post office, where he received some bad news. His world record had been broken, the clerk told him. That is, the hailstone Mr. Scott collected in 2010, which measured eight inches across and weighed nearly two pounds, was no longer the largest ever recorded. Some people in Canada had found a bigger one, the clerk said.

“I was sad all over the weekend,” Mr. Scott said, a few days after he heard the news. “I’ve been telling everybody that my record was broke.”

Fortunately for Mr. Scott, this was not quite right. On Aug. 1, a team of scientists from Western University in London, Ontario, collected a giant hailstone while chasing a storm in Alberta, about 75 miles north of Calgary. The hailstone measured five inches across and weighed a little more than half a pound — half the size and one-quarter the heft of Mr. Scott’s. So it was not a world record, but a Canadian one.

But the record-setting has come with increased hail damage. Although the frequency of reported “hail events” in the United States is at its lowest in a decade, according to a recent report by Verisk, a risk assessment firm, insurance claims on cars, houses and crops damaged by hail reached $16.5 billion in 2021 — the highest ever. Hail can strip plants to the stem and effectively total small cars. Ten years after the record-setting storm in Vivian, the tin roofs of some buildings are still dented. On Wednesday, a hailstorm killed a toddler in the Catalonia region of Spain.

“It’s one of the few weather hazards that we don’t necessarily build for,” said Ian Giammanco, a meteorologist at the Insurance Institute for Business & Home Safety. “And it’s getting bigger and worse.”

Although the changing climate probably plays a role in these trends, weather experts say, a more complete explanation might have something to do with the self-stoking interplay of human behavior and scientific discovery. As neighborhoods sprawl into areas that experience heavy hail and greater hail damage, researchers have sought out large hailstones and documented their dimensions, stirring public interest and inviting further study.

Julian Brimelow, the director of the Northern Hail Project, a new collaboration among Canadian organizations to study hail, whose team found the record hailstone in August, said, “It’s a pretty exciting time to be doing hail research.”

When Ice From the Sky …

The fixation with big hail goes back to at least the 1960s, when Soviet scientists claimed that they could significantly reduce the size of a storm’s hailstones by dispersing chemicals into the atmosphere. The method, called cloud seeding, promised to save millions of dollars in crop damage a year.

In the 1970s, the United States funded the National Hail Research Experiment to replicate the results of the Soviet experiments, this time by cloud seeding in hailstorms above Northern Colorado. Scientists then collected the largest hailstones they could find to see if it worked.

It did not. And a decade of research demonstrated that the Soviet effort probably hadn’t worked either. Both countries eventually gave up on the idea, and hailstone research stalled, although cloud seeding to increase rain and snowfall continued — and continues to this day — around the world.

During that lull, in 1986, a hailstone reportedly weighing 1.02 kilograms — about two and a quarter pounds, the heaviest ever recorded — was collected in Gopalganj, Bangladesh, during a storm that killed 92 people. All record of the hailstone — excepting eyewitness accounts and its purported weight — was lost. The Gopalganj stone became something of a fable among hail researchers, with a moral attached: Big hailstones were out there, but documentation was vital.

This prompted Kiel Ortega, a meteorologist who began doing hail research in 2004, to start cold-calling. Using Google Earth, he found businesses that sat in the paths of storms and rang them for on-the-ground updates. “As much as I like chasing storms,” he said, “at some point, you’re not going to have enough money or people to keep going out.”

Weather models indicated where hail might form and what the average size of the hailstones might be, but their predictions were often way off. So Mr. Ortega assembled a team of researchers and undergraduate students to cobble together reports whenever a serious hailstorm formed in the United States. How big was the “hail swath” — the area of the storm that dropped hail? How big was the biggest hailstone?

Most reports of record hail are made by civilians, but the accuracy is often lacking. The first thing most people do when they find a big hailstone? Take a picture. Second? Show it to their family or friends. Third? Put it in the freezer — where sublimation, the phase change from solid ice to water vapor, can shrink the hailstone over time.

Mr. Scott, in Vivian, kept his world record in the freezer for weeks before someone from the National Weather Service was able to officially measure and weigh it. During that time, it shrank by about three inches, he said. “I just didn’t realize what I had,” he said. “There’s a lot more hailstones that fell, and there were bigger ones than the one I picked up.”

… Lands on Your Car

Every hailstone has a story cryptically etched in its shape and layers. To decode the story, scientists use mathematical models to predict where hail will fall and what it will look like; they then collect and analyze actual hailstones to refine those models, piecing together a stone’s path from the storm to the ground.

But some of the most basic features of large hail remain shrouded in mystery; survey procedures are inconsistent, and funding is scarce. How fast do these hailstones fall? What gives a hailstone its shape? How large can a hailstone possibly get?

“Hail data are terrible,” Dr. Brimelow said. “It is probably one of the worst data sets on the planet.”

Almost all hail is created in supercells, or storms with updrafts of rising air that slowly rotate. Small pieces of ice, called embryos, get swept into those updrafts like “a fountain of particles,” said Matt Kumjian, a meteorologist at Penn State University who studies the internal dynamics of storms. The embryos smash into water droplets, becoming hailstones that continue to grow until they are too heavy to stay suspended and then fall to the ground.

Over the past couple of years, Dr. Giammanco and his colleagues have traveled around North America making 3-D scans of large hailstones. Later in the lab, using “probably the most sophisticated ice machine on the planet,” Dr. Giammanco said, the team recreates the hailstones to calculate their fall speed and the damage they could cause.

Mr. Ortega and his colleagues have been using high-speed photography to capture large hailstones in motion. This entails sprinting in front of supercells and setting up camera systems to better understand how fast the ice is moving when it hits the ground and what shape it takes just before impact.

Each detail is a clue. A cloudy hailstone layer indicates that the water froze instantly on the embryo, trapping air bubbles inside. Clear ice means the water had time to expand around the embryo before freezing. Spherical hailstones are thought to have tumbled around in the supercell; spiky ones shoot like comets through the storm.

The end of a hailstone’s story is often what attracts public attention. If some ice breaks your windshield, do you really care what path it took through a supercell? But, Dr. Kumjian said, retracing the ontogeny of hail can help scientists better predict where and when large hailstones will fall next.

The record hailstone in Canada was collected when the Northern Hail Project intercepted a supercell as it was passing through central Alberta. The researchers used radar forecasting to predict the storm’s path, then pulled up to a stretch of road around 20 minutes after the hail swath had passed. The ground was littered with baseball-size hailstones, the largest of which the researchers bagged and froze.

The biggest hailstones “are really more of an academic interest,” Dr. Brimelow said, because they “fall in such low concentrations that they’re not really as hazardous as golf-ball-size hail.” But, Dr. Kumjian said, looking for “the absolute worst-case scenario” can refine forecasting models and help explain supercell dynamics. Studying single hailstones over time can have an outsize effect on the understanding of storms. And, he said, there is the irresistible question, What is the limit of nature?

Dr. Kumjian and Dr. Brimelow have been creating a database of the largest hailstones recorded around the world. The two believe they have determined the maximum possible size of hail: just over three pounds and around a foot in diameter. They will present their findings in September at the second-ever North American hail research workshop in Boulder, Colo.

Francis Lavigne-Theriault, who coordinates storm chases and field operations for the Northern Hail Project, said the presence of large hail in central Alberta indicated that it probably occurs “a lot more frequently” than previously thought. Dr. Brimelow said that the record was “quite remarkable,” because the conditions for hail formation in the area were generally less “juicy” than other areas in the country.

In other words, there are many more records to be found.

When Mr. Scott was informed that his world record had not been broken after all and learned exactly what had happened — the crossed wires, the multiple records, the grams and the pounds — he was relieved. His birthday was not ruined; he could tell his friends and family that his record remained intact.