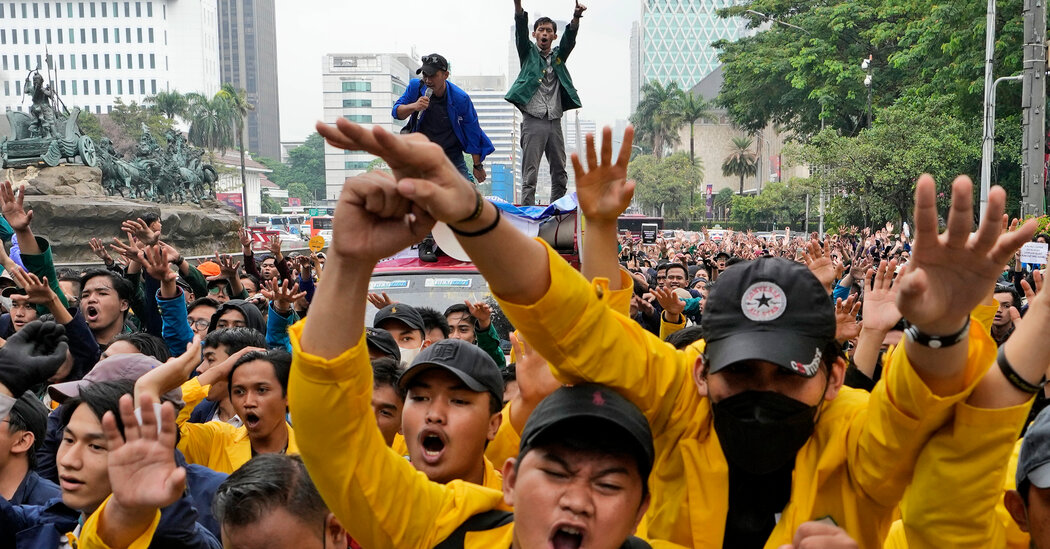 JAKARTA — Thousands of protesters rallied across Indonesia this week calling for the government to reverse its first price hike on subsidized fuel in eight years, and vowing to continue demonstrations until President Joko Widodo meets their demands.

The government deployed thousands of police officers this week to control the crowds and guard gas stations across the country of 270 million. On Thursday, university students in Jakarta, the capital, clashed with the police and burned tires in front of the presidential palace. In the city of Bengkulu on Tuesday, the police deployed water cannons and tear gas on students, injuring five.

The labor activists, workers and students who are protesting want a reversal of a 30 percent increase to subsidized fuel prices that was announced last Saturday, a hike that many say is necessary but remains deeply unpopular in the Southeast Asian nation.

While the protests have been largely peaceful, they come at a sensitive time for Mr. Joko, who has been traveling the globe meeting with world leaders in advance of the Group of 20 summit, scheduled to take place in Bali later this year.

“In a week if there is no response, if the government still doesn’t care and is still deaf and blind toward the people’s suffering, the students all over Indonesia are ready to protest in much bigger numbers,” Muhammad Yuza Augusti, a student at Bogor Agriculture Institute, yelled into a microphone on a rainy Thursday.

Many analysts say that Mr. Joko will likely emerge unscathed from the protests, as he can blame the price hike on the war in Ukraine. Polls show that Mr. Joko has an approval rating of around 68 percent, dented to some extent by his decision to raise cooking oil prices earlier this year.

Yunarto Wijaya, executive director of Charta Politika, a polling agency in Indonesia, said the government should be able to push the increase through without much trouble. He pointed out that the protests have been relatively mild so far and that stocks rose after Mr. Joko announced the price hike. “To me, there’s no indicator showing a social blow on a big scale,” Mr. Yunarto said.

Still, the government may have reason to be worried.

No issue is more politically sensitive in Indonesia than fuel price increases. In 1998, after President Suharto raised prices by up to 71 percent, violent protests resulted in the deaths of 1,200 people and forced his resignation. Other leaders who followed have sought to raise prices, only to back down in the face of unrest.

Last Saturday, Mr. Joko, who is often referred to as “Jokowi” in Indonesia, told the nation in a televised speech that he had no choice but to increase prices, and that his government had already “tried its best” to keep them down.

Protesters say the move hurts the poor at a time of inflation and with the country still struggling to recover from the coronavirus pandemic. The government’s cash assistance of $40 a month until the end of the year for the poor is not enough to cushion the blow, they say.

Ten percent of Indonesians — about 27 million people — live below the official poverty line of $141 a month for a family, and cannot afford to pay more for motorcycle fuel or public transportation. Inflation was 4.7 percent in August, down from 4.9 percent in July, the highest in nearly eight years.

For decades, Indonesians have paid one of the lowest rates in the world for gasoline — the equivalent of about $2 a gallon — thanks to a government subsidy program that began under President Sukarno in the 1960s. But soaring oil prices worldwide have caused the country’s energy subsidies to triple this year, to $34 billion.

Mr. Joko had promised not to raise fuel prices until the end of the year. On Sunday, he acknowledged that car owners had benefited from more than 70 percent of the subsidies, instead of the underprivileged. He said the government is determined to shift a part of the fuel subsidy funds to “more targeted assistance.”

“The government has to make decisions in tough situations,” he said.

Some analysts have argued that Indonesia, the world’s fourth most populous nation, has kept fuel prices artificially low for too long and that the subsidies should be diverted to infrastructure projects and public works. Sri Mulyani Indrawati, Indonesia’s finance minister, said that the current energy subsidies could be used to build thousands of hospitals, schools or roads.

Even with the fuel price increase, the government’s spending on energy subsidies will increase this year, according to Ms. Sri Mulyani.

But the protesters are not buying the government’s argument.

“The fuel price hike proves that the government doesn’t care about the people, it only cares about the national strategic projects,” said Supriadi, a protester from State Polytechnic of Jakarta, who, like many Indonesians, goes by one name.

Bhima Yudhistira Adinegara, director of the Center of Economics and Law Studies, a research institute in Jakarta, said some of the government’s $27 billion infrastructure budget this year could have been used for fuel subsidies. He also criticized the government for not postponing the construction of a new capital in Borneo, a project that is expected to cost roughly $32 billion.

Mr. Joko wants to be seen as “the father of development,” Mr. Bhima said.

The protesters have vowed to continue demonstrating outside the presidential palace. On Thursday, even as many of them packed up to comply with a law that requires protests in Indonesia to end by 6 p.m. daily, they were still distributing posters for future rallies.

On the wall of a half-built subway station near the presidential palace, one protester left a simple message for the president in graffiti: “Jokowi fails.”