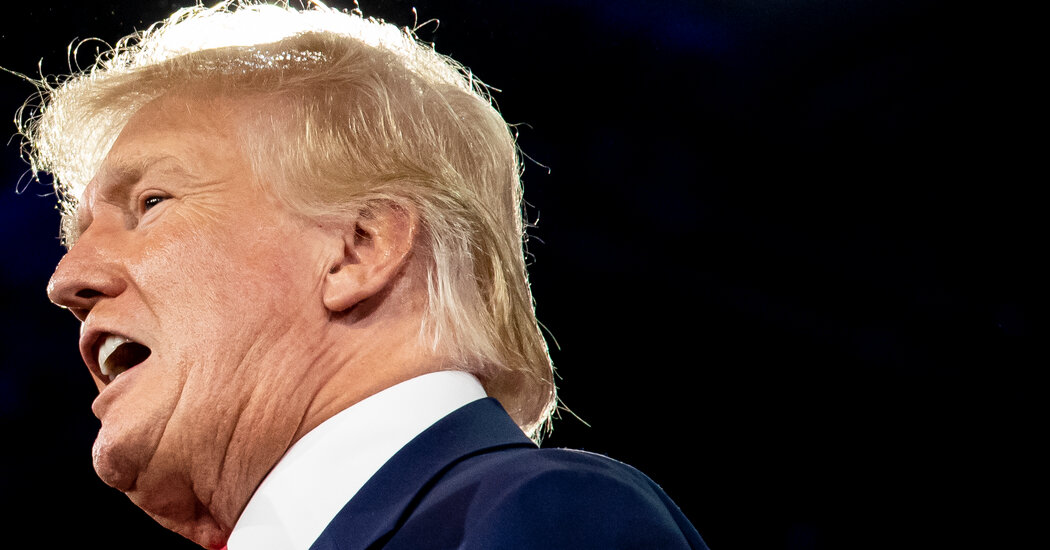 Trump Embraces Conspiracy Theories He Only Winked at Before

In a 24-hour period this week, former President Donald J. Trump posted to his social media platform, Truth Social, 88 times, amplifying one conspiracy theory after another.

Among his unsupported claims: A retiring F.B.I. agent was behind both the search of his Mar-a-Lago property on Aug. 8 and the investigation into his campaign’s possible ties to Russia; a forthcoming report will prove widespread corruption against his 2016 campaign; and he should be reinstalled as president because the 2020 election was fraudulent.

“Declare the rightful winner or, and this would be the minimal solution, declare the 2020 Election irreparably compromised and have a new Election, immediately!” he wrote.

Mr. Trump has spent more than a decade on social media attacking enemies, cozying up to far-right ideas and sharing false information. He used Twitter to perpetuate the lie that President Barack Obama was not born in the United States and later deemed one investigation after another partisan witch hunts.

But, as his legal exposure intensifies over his handling of government documents, the former president this week crossed over to a more direct embrace of claims batted around the dark corners on the internet. His winks and nods to the far right became enthusiastic endorsements, and his flirtations with convoluted conspiratorial ideas became more overt.

He shared a flurry of 61 posts written by Truth Social users, many of whom had ties to QAnon, an online conspiracy movement aligned with the former president. One post included “the storm,” which QAnon followers use to describe the day when the movement’s enemies will be violently punished.

The strategy partly mirrors Mr. Trump’s chaotic approach during moments of crisis, searching for a message to ignite supporters while shifting attention away from his controversies. But the posts this week appeared especially haphazard, opening a door to the former president’s thought process even as his legal team tries to craft a cogent defense against the Justice Department’s investigation.

Soon after the F.B.I. search, Mr. Trump claimed that he had declassified all the documents in his possession — suggesting that he had known of their existence at Mar-a-Lago. The classification status may ultimately prove irrelevant, since some of the charges focus on whether he dodged attempts to recover the documents, regardless of how they had been classified.

The shift also reflected Mr. Trump’s embrace of the more conspiracy-theory-driven posts commonly found on Truth Social, which he started using only in late April. Mr. Trump was barred from Facebook and Twitter in January 2021 for violating rules around inciting violence, losing hundreds of millions of social media followers. Now, unshackled from mainstream rules and decorum, Mr. Trump speaks to a much smaller base of supporters — fewer than four million followers — using fiery rhetoric and echoing the conspiracy theories, such as QAnon, that remain popular on the platform.

More on Misinformation and Falsehoods

The posts have alarmed disinformation experts, who fear that Mr. Trump’s incendiary remarks could further inflame political tensions. After the Mar-a-Lago search, an armed man tried to enter an F.B.I. office and was killed by the police.

Tens of millions of Americans believe that the use of force would be justified to restore Mr. Trump to the White House, said Robert Pape, a professor of political science at the University of Chicago, citing a poll conducted last year.

“You can see how easy it’s going to be for Trump to trigger a lot of these incendiary responses with incendiary posts himself,” Mr. Pape said.

A spokesman for Mr. Trump, Taylor Budowich, did not respond to a request for comment about Mr. Trump’s posts.

Mr. Trump is well known for spending hours tuned in to Fox News. Some of his posts in the past week, including his call to be reinstalled as president, have received regular attention on the network.

But his posts suggest that he is increasingly attuned to voices in far-right and fringe publications that are even friendlier to his cause. He shared a polling story from Off the Press, a right-wing news site with only a few hundred social media followers, with the headline: “Michigan Republicans Still Love Trump.” He also shared an article from American Thinker, a conservative site that had posted conspiracy theories about the 2020 election that it later retracted, claiming the F.B.I. was “a campaign arm of the Democrat Party.”

Some posts included content commonly found in the dark back channels of the internet, where QAnon conspiracy theorists cling to outlandish ideas about Satan-worshiping Democratic pedophiles and a nationwide cover-up of widespread voter fraud. Mr. Trump shared content this week from at least 24 accounts tied to QAnon, according to an analysis by Alex Kaplan, a senior researcher at Media Matters for America, a progressive think tank.

Mr. Trump also posted multiple times about Timothy Thibault, an F.B.I. agent who retired this week after more than 20 years at the bureau. Far-right news sites reported that two agents had escorted Mr. Thibault off the grounds of the F.B.I. in a dramatic scene that Mr. Trump described as having been “perp walked.” Mr. Trump also falsely claimed that Mr. Thibault had played a central role in the Mar-a-Lago search.

“The fired agent was in charge of the Mar-a-Lago Raid, and the Election investigation,” Mr. Trump said on Truth Social. “How’s he doing?”

Mr. Thibault’s lawyers said in an emailed statement that the agent had decided to retire a month ago and that he had “walked out of the building by himself.” He was not involved in the Mar-a-Lago search, the lawyers said.

In attacking the F.B.I., Mr. Trump also returned to some familiar themes, like the bureau’s investigation into possible collusion between his 2016 election campaign and Russia. He shared a link to an article from Breitbart, the right-wing news site, which misleadingly suggested that the F.B.I. agents involved in the Russia investigation had been “running” the Mar-a-Lago search. Another Breitbart article that Mr. Trump posted claimed, without evidence, that the F.B.I. might have searched Mar-a-Lago for documents that would help prove Russian interference in 2016.

“This is an incredible article — a must-read for all!” Mr. Trump wrote.

Mr. Trump also shared a post about Ray Epps, a Trump supporter who attended the Jan. 6, 2021, attack on the Capitol and was implicated in a conspiracy theory that the F.B.I. had incited the riot. The post falsely claimed that Mr. Epps’s wife worked for a division of Dominion Voting Systems, an election technology company at the center of a series of conspiracy theories about the 2020 election. In fact, her LinkedIn profile showed she worked for Dominion Enterprises, an unrelated marketing services company.

“Is this really true?” he wrote.