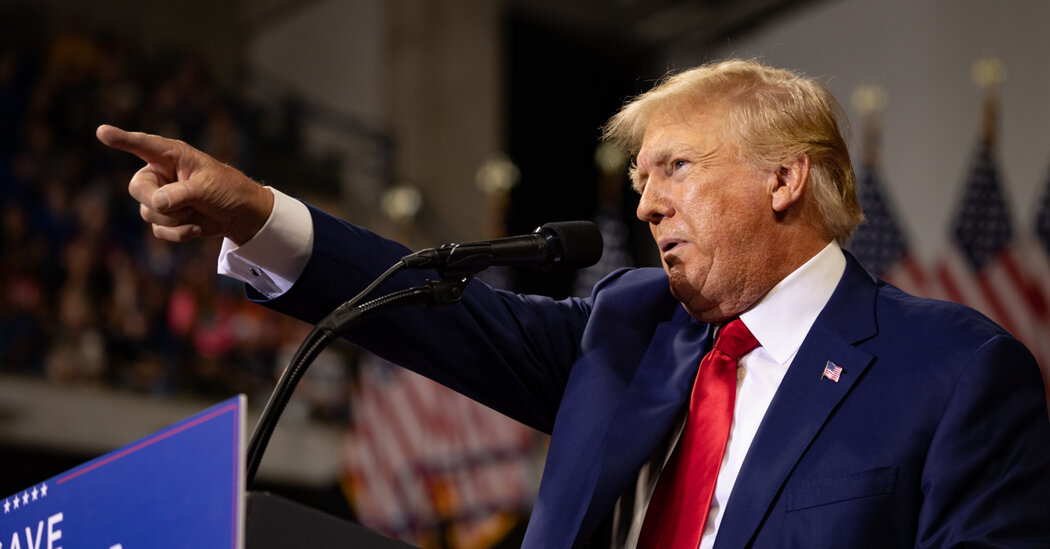 The social media company backed by former President Donald J. Trump may not be able to count on a $1 billion deal it arranged to finance its upstart Truth Social platform.

The deal was agreed upon last year by about three dozen hedge funds and other wealthy investors, and is expected to expire on Sept. 20, according to a regulatory filing. The offer’s status was put into jeopardy after the shell company that is seeking to merge with Mr. Trump’s company delayed the deadline for completing the merger by at least three months.

The $1 billion financing arrangement, known as a private investment in public equity, or PIPE, was intended to provide another source of financing to Trump Media & Technology Group, the parent of Truth Social, upon the completion of its merger with Digital World Acquisition Corp., a vehicle known as a special purpose acquisition company, or SPAC.

Digital World raised $300 million in an initial public offering last September, money that Trump Media would assume after a merger, in addition to a stock market listing. The $1 billion in PIPE financing would be provided by the investors “upon consummation of their business combination,” the merging companies said in a statement when the deal was announced in December.

The merger had been expected to close no later than Sept. 20. But the delay in completing the merger means that the hedge funds that agreed to invest in the newly merged company can walk away if they want, said experts familiar with PIPEs.

“Once the PIPE termination date passes, the investors are no longer contractually bound to participate,” said Kristi Marvin, a former investment banker and founder of SPACInsider, which collects data on the SPAC market.

She said that some hedge funds might want to keep to the agreement in the event that the merger is completed at a later date. But any investor who chooses to back out after Sept. 20 can do so without paying a penalty.

Digital World might need to persuade investors who wish to remain in the PIPE deal to agree to a new deadline.

Representatives for several investors in the PIPE agreement, all of whom declined to be identified because the deal is still pending, said they had not decided what to do if the agreement expired, but at least a few were ambivalent about remaining in the deal.

The investor representatives said neither Digital World nor E.F. Hutton, the investment bank that arranged the financing, had offered any guidance. One investor responded to a question about the status of the financing deal with an emoji of a person shrugging.

The future of the PIPE has received less attention than the status of the merger between Trump Media and Digital World, which has been delayed by investigations by the Securities and Exchange Commission and federal prosecutors.

The federal authorities are looking into potentially improper communications between representatives of Digital World and Trump Media before the SPAC’s public offering, as well as the unusual trading in Digital World’s stock before the merger announcement last October.

Last week, Digital World was on the verge of being forced to liquidate and return the $300 million it raised because it had failed to get 65 percent of its shareholders to agree to give it another year to complete the merger with Trump Media. At the last minute, the investment group that sponsored the SPAC agreed to put more than $2.8 million into a special bank account for the benefit of shareholders. That move delayed the potential liquidation for at least three months and gave Digital World more time to secure shareholder approval for a one-year extension.

It is possible that Digital World will decide to cancel the existing PIPE deal and seek to negotiate a new one. Unlike many PIPE deals that accompany SPAC mergers, the hedge funds that agreed to the Trump Media deal are not required to turn over any cash until the merger is completed.

The PIPE agreement had offered lucrative terms but was forged at a time when Digital World’s stock was riding high — it has fallen more than 70 percent from its peak in March. In recent months, investigations into the SPAC merger and trading activity have come to light, along with developments in other civil and criminal inquiries into Mr. Trump’s business dealings, political activities and handling of classified documents.

Truth Social, which began in February, markets itself as an uncensored platform that will not discriminate against users for their political beliefs. Positioned as an alternative to Twitter, which barred Mr. Trump in January 2021, saying he violated rules around inciting violence, it has become a platform where conspiracy-theory-driven posts are commonly found and sometimes amplified by Mr. Trump to his nearly four million followers.

In the short term, Trump Media may need to raise additional money to keep operating. The company has raised about $37 million from unnamed investors, including $15 million this year, but it is unclear how much cash it has left.

Trump Media did not respond to a request for comment about its financing needs. But in an earlier emailed statement, a company spokeswoman said The New York Times “should apologize for their continued slander and defamation of Truth Social.”