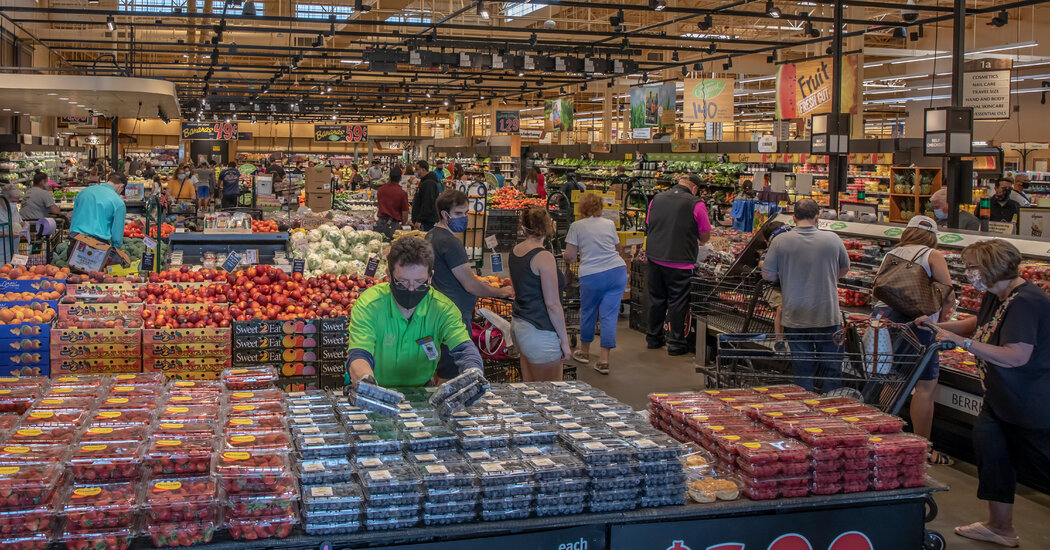 Citing losses, the supermarket chain Wegmans announced that it had halted the use of its self-checkout app in which customers scanned their groceries as they shopped.

The company did not specify the amount of losses or indicate whether they were from thefts or from customers who forgot to scan certain items, but it said in a statement that it was discontinuing the app’s use until it could make improvements “that will meet the needs of our customers and business.”

The app, known as SCAN, was introduced early in the pandemic to provide a contactless option for grocery shopping, the company said. Customers could scan each grocery item they picked up as they moved through a store. To pay, they would scan a bar code at the self-checkout register, which would pull the total from the app.

“SCAN users have told us they love the app and convenience it offers,” Wegmans said in a statement. “Unfortunately, the losses we are experiencing prevent us from continuing to make it available in its current state.”

Wegmans, popular in the northeastern United States, said it would introduce new digital ways to streamline shopping. It was unclear where the app was available and what the company’s losses amounted to; a company representative could not be reached for further comment. Wegmans has 107 stores, with 48 in New York and the rest in Pennsylvania, New Jersey, Virginia, Maryland, Massachusetts and North Carolina.

Wegmans sent an email to frequent users of the app to offer them a $20 coupon for the inconvenience. A number of shoppers shared their disappointment about the app going out of service, saying on Twitter that it made their grocery trips more efficient.

At grocery stores, there are three main options for self-checkout systems.

A third was spearheaded by Amazon at its brick-and-mortar Amazon Go stores: Shoppers put items into their carts, and their accounts are automatically charged upon leaving without having to stop at a register. This approach relies on technology such as sensors and cameras that detect when an item is removed from a shelf and placed into a customer’s cart.

Self-checkout systems were developed to help speed up grocery shopping, said Ray Wimer, a professor of retail management at Syracuse University. He said he had noticed the systems improve in efficiency over the past two decades.

A study of retailers in the United States and Europe released in 2016 found that retailers with self-service lanes and apps had a loss rate of about 4 percent, which is more than double the industry average.

Walmart suspended the use of its Scan & Go app in 2018, four months after introducing it to more than 100 stores. The app had low participation, the company said. A former Walmart executive, Joel Larson, told Business Insider that the app was also phased out in part because of theft.

“Retailers in particular are very sensitive to loss prevention issues because the margins in their business are tighter, especially the grocery store retailers,” Mr. Wimer said.

The self-checkout lanes with an employee monitoring customers are more likely to remain in stores, he said. But he did not believe a cashier could ever be fully replaced, which was the concern when this system started. Self-checkout options still run into issues with scales and sensors that can hold up a line, and some customers prefer to avoid the possibility of that delay.

The Amazon-style system, which seems to prevent much of the loss present with other self-checkout apps, is expensive for companies to set up because of the technology required, Mr. Wimer said.

Responses to self-checkout options vary based on age, said Judy Mottl, the editor of Retail Customer Experience, a website with news about commerce, technology and consumer behavior. Younger people may be more inclined to use self-checkout options, but some customers are concerned about security and privacy as it is unknown how much data is stored with options like apps.

More companies experimented with self-checkout options at the onset of the coronavirus pandemic, said Neil Saunders, managing director and retail analyst at GlobalData Retail, a company that provides insights on the retail market. Shoppers desired minimal contact for safety, and avoiding in-person interaction at the register provided that. The pandemic also prompted an increase in online shopping for groceries.

The shrinkage rate, or amount of theft, typically rises in retail stores when the cost of living increases, Mr. Saunders said. Inflation accelerated in 2021 partly because of soaring demand combined with supply chain disruptions. It was exacerbated in 2022 as the war in Ukraine caused fuel and food prices to surge.

“It’s a shame for customers because it deteriorates what is a very fast and efficient service,” Mr. Saunders said. “But as far as Wegmans is concerned, I think they have one eye at the bottom line, and they’re finding that the losses from this system are just too great.”