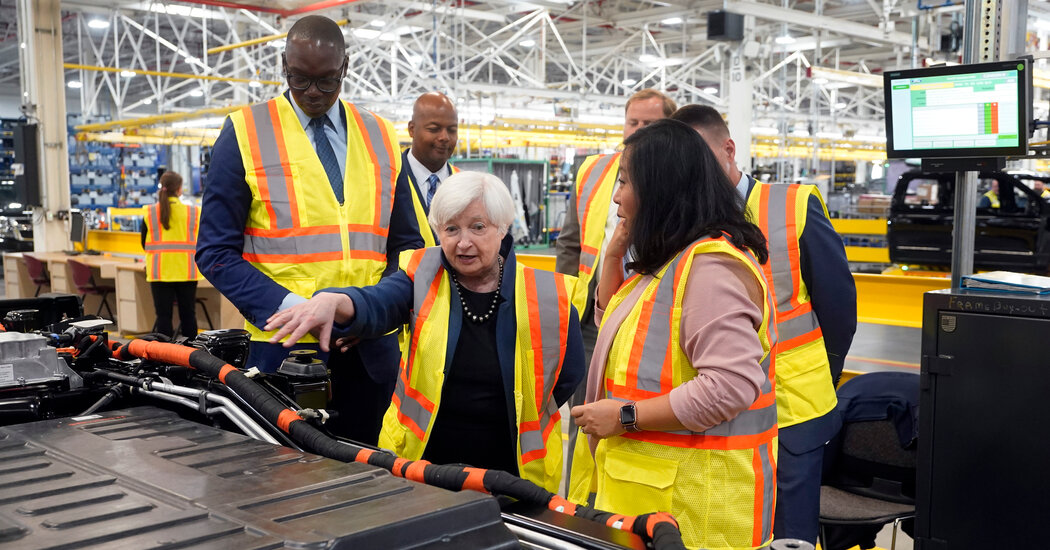 DEARBORN, Mich. — Emerging from months of inflation and recession fears, the Biden administration is pivoting to recast its stewardship of the U.S. economy as a singular achievement. In their pitch to voters, two months before midterm elections determine whether Democrats will maintain full control of Washington, Biden officials are pointing to a postpandemic resurgence of factories and “forgotten” cities.

The case was reinforced on Thursday by Treasury Secretary Janet L. Yellen, who laid out the trajectory of President Biden’s economic agenda on the floor of Ford Motor’s electric vehicle factory in Dearborn. Mich. Surrounded by F-150 Lightning trucks, Ms. Yellen described an economy where new infrastructure investments would soon make it easier to produce and move goods around the country, bringing prosperity to places that have been left behind.

“We know that a disproportionate share of economic opportunity has been concentrated in major coastal cities,” Ms. Yellen said in a speech. “Investments from the Biden economic plan have already begun shifting this dynamic.”

Her comments addressed a U.S. economy that is at a crossroads. Some metrics suggest that a run of the highest inflation in four decades has peaked, but recession fears still loom as the Federal Reserve continues to raise interest rates to contain rising prices. The price of gasoline has been easing in recent weeks, but a European Union embargo on Russian oil that is expected to take effect in December could send prices soaring again, rattling the global economy. Lockdowns in China in response to virus outbreaks continue to weigh on the world’s second-largest economy.

In her speech on Thursday, Ms. Yellen said the legislation that Mr. Biden signed this year to promote infrastructure investment, expand the domestic semiconductor industry and support the transition to electric vehicles represented what she called “modern supply-side economics.” Rather than relying on tax cuts and deregulation to spur economic growth, as Republicans espouse, Ms. Yellen contends that investments that make it easier to produce products in the United States will lead to a more broad-based and stable economic expansion. She argued that an expansion of clean energy initiatives was also a matter of national security.

“It will put us well on our way toward a future where we depend on the wind, sun and other clean sources for our energy,” Ms. Yellen said as Ford’s electric pickup trucks were assembled around her. “We will rid ourselves from our current dependence on fossil fuels and the whims of autocrats like Putin,” she said, referring to President Vladimir V. Putin of Russia.

The remarks were the first of several that top Biden administration officials and the president himself are planning to make this month as midterm election campaigns around the country enter their final stretch. After months of being on the defensive in the face of criticism from Republicans who say Democrats fueled inflation by overstimulating the economy, the Biden administration is fully embracing the fruits of initiatives such as the $1.9 trillion American Rescue Plan of 2021, which disbursed $350 million to states and cities.

At the factory, Ms. Yellen met with some of Ford’s top engineers and executives. During her trip to Michigan, she also made stops in Detroit at an East African restaurant, an apparel manufacturer and a coffee shop that received federal stimulus funds. She dined with Detroit’s mayor, Mike Duggan, and Michigan’s lieutenant governor, Garlin Gilchrist.

Detroit was awarded $827 million through the relief package and has been spending the money on projects to clean up blighted neighborhoods, expand broadband access and upgrade parks and recreation venues.

Although Ms. Yellen is helping to lead what Treasury officials described as a victory lap, some of her top priorities have yet to be addressed.

How Times reporters cover politics. We rely on our journalists to be independent observers. So while Times staff members may vote, they are not allowed to endorse or campaign for candidates or political causes. This includes participating in marches or rallies in support of a movement or giving money to, or raising money for, any political candidate or election cause.

The so-called Inflation Reduction Act, which Congress passed last month, did not contain provisions to put the United States in compliance with the global tax agreement that Ms. Yellen brokered last year, which aimed to eliminate corporate tax havens, leaving the deal in limbo. On Thursday, she said she would continue to “advocate for additional reforms of our tax code and the global tax system.”

Despite Ms. Yellen’s belief that some of the tariffs that the Trump administration imposed on Chinese imports were not strategic and should be removed, Mr. Biden has yet to roll them back. In her speech, Ms. Yellen accused China of unfairly using its market advantages as leverage against other countries but said maintaining “mutually beneficial trade” was important.

Ms. Yellen also made no mention in her speech of Mr. Biden’s recent decision to cancel student loan debt for millions of Americans. She believed the policy, which budget analysts estimate could cost the federal government $300 billion, could fuel inflation.

Treasury Department officials said Detroit, the center of the American automobile industry, exemplified how many elements of the Biden administration’s economic agenda are coming together to benefit a place that epitomized the economic carnage of the 2008 financial crisis. Legislation that Democrats passed this year is meant to create new incentives for the purchase of electric vehicles, improve access to microchips that are critical for car manufacturing and smooth out supply chains that have been disrupted during the pandemic.

“There will be greater certainty in our increasingly technology-dependent economy,” Ms. Yellen said.

But the transition to a postpandemic economy has had its share of turbulence.

Ford said last month that it was cutting 3,000 jobs as part of an effort to reduce costs and become more competitive amid the industry’s evolution to electric vehicles. The company also cut nearly 300 workers in April.

“People in Michigan can be pretty nervous about the transition to electric vehicles because they actually require by some estimation a lot less labor to assemble because there are fewer parts,” said Gabriel Ehrlich, an economist at the University of Michigan. “There are questions about what does that mean for these jobs.”

Republicans in Congress continue to assail the Biden administration’s management of the economy.

“Inflation continues to sit at a 40-year high, eating away at paychecks and sending costs through the roof,” Representative Tim Walberg, a Michigan Republican, said on Twitter on Thursday. “While in Michigan today, Secretary Yellen should apologize for being so wrong about the inflation-fueling impact of the Biden administration’s runaway spending.”

Ms. Yellen will be followed to Michigan next week by Mr. Biden, who will attend Detroit’s annual auto show.

The business community in Detroit, noting the magnetism of Michigan’s swing-state status, welcomed the attention.

“We’re about as purple as it gets right now,” Sandy K. Baruah, the chief executive of the Detroit Regional Chamber, a business group.

Noting the importance of the automobile industry to America’s economy, Mr. Baruah added: “When you think about blue-collar jobs and the transitioning nature of blue-collar jobs, especially in the manufacturing space, Michigan has the perfect optics.”