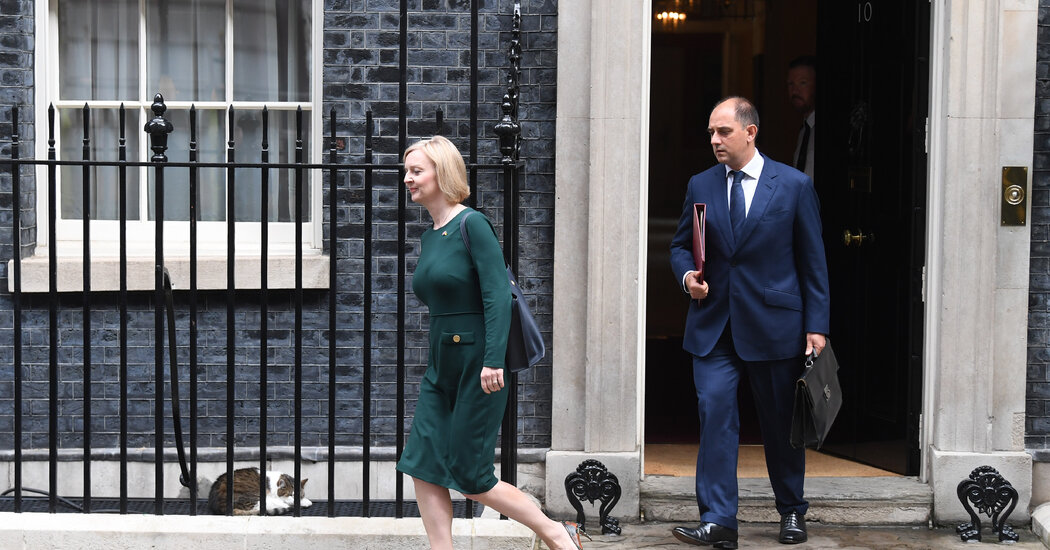 LONDON — Scrambling to spare millions of households the pain of skyrocketing energy bills this winter, Britain’s new prime minister, Liz Truss, announced a sweeping plan on Thursday to freeze gas and electricity rates for two years, at a cost of tens of billions of pounds to the British Treasury.

The plan, rolled out by Ms. Truss on her third day in office, could represent the largest government intervention in the economy in decades, even bigger than the emergency measures during the coronavirus pandemic, when the state spent 78 billion pounds, about $90 billion, to keep people in their jobs.

The move is intended to shield people from a jolting increase in energy costs next month, when the annual price for electricity and natural gas for a typical British household was scheduled to jump to £3,549, from £1,971. Under the plan, average annual costs would be capped at £2,500. Costs for businesses, charities and schools would also be capped for six months, underscoring the extraordinary reach of the program.

Ms. Truss announced that the government would lift a ban on hydraulic fracking and grant approvals for new oil and gas drilling in the North Sea. That is part of a longer-term effort to make Britain less dependent on imported energy. But the new supplies will not flow quickly enough to avert the current crisis — mainly the fallout from Russia’s retaliatory cutbacks in gas supplies to Europe.

“This is a moment to be bold,” Ms. Truss said to a raucous House of Commons. “We are facing a global energy crisis, and there are no cost-free options.”

Turmoil at Downing Street. Boris Johnson stepped down less than three years after a landslide election victory, following a series of scandals that have ensnared his government. Here’s the backstory:

The Pincher case. Mr. Johnson’s downfall was linked to the resignation of Chris Pincher, a Conservative deputy chief whip, after he admitted to having groped two men. Outrage grew as it was revealed that Mr. Johnson was aware of prior sexual misconduct allegations against him when he appointed him; the prime minister had previously denied knowing about the accusations.

The ‘Partygate’ scandal. Since late last year, Mr. Johnson had been grappling with reports about parties he attended in Downing Street while Covid lockdown rules were in force. An internal inquiry found that 83 people violated the rules at parties, and the police imposed hundreds of fines, including one on Mr. Johnson, for breaches of social distancing. Mr. Johnson survived a no-confidence vote triggered by the scandal, but was left reeling politically.

The measure, she said, would save a typical household £1,000 a year, including a £400 reduction on bills that the last government announced in May. “We’re supporting this country through this winter and the next,” she said.

For Ms. Truss, who campaigned on a message of tax cuts and deregulation, it was both a striking ideological reversal and a litmus test for her fledgling government. Whether the new plan will settle the nerves of people anxious about being able to heat and light their homes this winter could determine her fate as prime minister.

It could also help determine how successfully the West will weather Russia’s efforts to use energy as a weapon against European countries that imposed sanctions on Moscow after the invasion of Ukraine. Though Britain is far less reliant on Russian energy than Germany or Italy, the structure of its energy market makes it extremely sensitive to fluctuations in the price of natural gas.

In her remarks, Ms. Truss did not put a price tag on the policy, with officials saying the cost would depend on several variables, including the market price of gas. But Britain’s plan will necessitate enormous borrowing, which could affect the government’s credit rating and the strength of its currency.

The pound has traded this week at its lowest levels against the dollar since 1985, when Margaret Thatcher was prime minister, reflecting alarm about soaring inflation, a looming recession and how the government will fund so much more spending and tax cuts.

Capping energy rates, however, should take some of the steam out of the inflation rate, which economists had projected could peak anywhere from 13 percent to 22 percent by early next year. Consumer prices rose more than 10 percent in July from a year ago, the fastest pace in four decades. Ms. Truss estimated that the price caps could curb the inflation rate by up to five percentage points.

Ms. Truss has said that she will go ahead with a campaign promise to cut taxes, claiming that it will help lift the economy overall. But some critics said that such a move would only worsen the damage to Britain’s public finances and could exacerbate inflation by stoking more demand in the economy. Ms. Truss has insisted that the government could recoup some of its lost revenue through faster economic growth.